Vocational expertise is a dream come true for former destitutes

Nambaziira recounts the day she was touched by the good Samaritans of Norway through the Katanga Community School.

Graduates of Katanga Vocational school with their sewing machines given to them for good perfomance. PHOTOS: Agnes Nantambi

Nambaziira recounts the day she was touched by the good Samaritans of Norway through the Katanga Community School.

Teddy Nambaziira will leave to remember the day she left the streets to attain vocational skills.

The 18-year-old resident of Katanga, recounts the day she was touched by the good Samaritans of Norway through the Katanga Community School.

"When I lost all my parents, I handed myself to God to take charge and I thank Him that I have managed to attain the skills in tailoring, which I think will drive me to a higher level. I had lost hope, but with the new skills attained, I hope to reach greater heights," she said.

Nambaziira is not alone. Jackie Adora, another former homeless girl says living he life of a destitute is such a hard task that involves a lot of energy and sacrifice for an opportunity.

She says her hope for have a better life had died completely, but the many problems she suffered made her more determined to work for a better life.

"I was identified as a destitute and given an opportunity. My dream is to work hard to ensure that I also help others who are in the same condition as I was," Adora said.

"We never had what to eat, or to wear, we stayed in the slums throughout our lives with a big family, but God never let us down. He continued to provide for us including providing us with what to put on. I have gained skills, and I believe, I will be able to assist my family to realise better dreams than before, "she said. 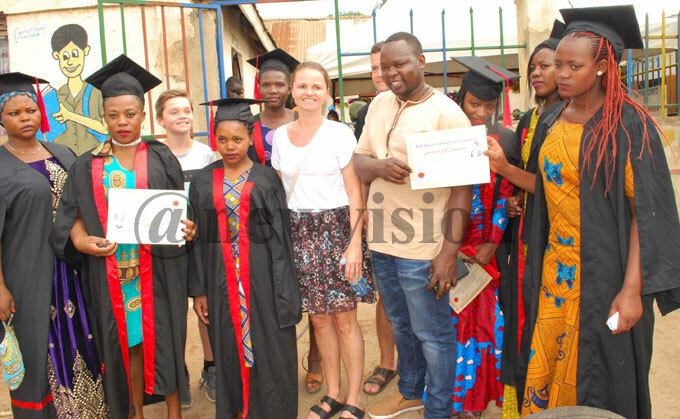 Richard Kiwanuka, the director of Katanga Community School posing for a picture with some of the graduates and their funders from Norway

Adora applauded the directors of the schools for taking her on saying her background will not determine her destination given the skills attained.

"I never had any hope for better life, but I believe I can look into my future if I put my skills into good use, "she said

Richard Kiwanuka, the director of Katanga community school during the graduation day for vocational and kindergarten where over ten former street children, orphans and prostitutes graduated with certificates in tailoring, challenged the grandaunts to protect their integrity through being trustworthy people.

"You can only make money if you build people's trust, otherwise this world will not be easy for you. Learn to respect and also always remember the background where you came from, "he said.

He asked Government to consider setting up a fund for destitute and slum dwellers to help them gain skills which can turn around their lives.

Kiwanuka observed that given the current unemployment, the country cannot attain its vision when such people are left behind.

Kiwanuka also called upon the Government to provide a conducive environment to the private investors who are working towards supplementing on its work of delivering services.

He said that with the support from the good Samaritans of Norway, a good number of children from the slums have been transformed under the get children out of the street project.

He said the project has helped in addressing the problem of unemployment through skilling the beneficiaries.

According to Kiwanuka,the project is aimed at empowering slum dwellers and street children by turning them into productive citizens and better leaders of tomorrow.

Use the church to spread biotechnology gospel - minister

Calls for scientists to simplify information on biotechnology