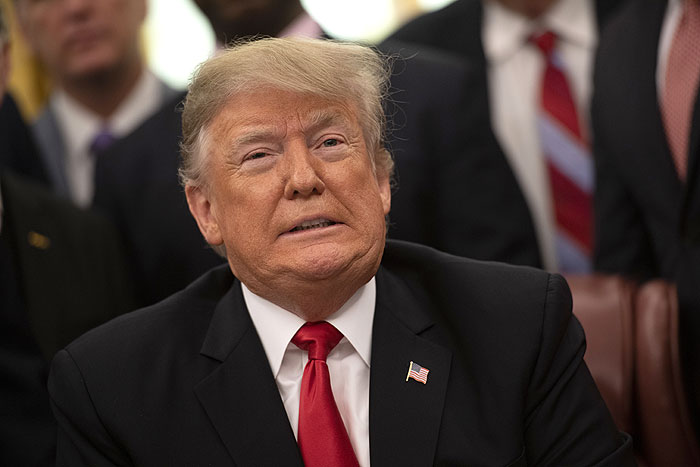 An angry and bitter President Donald Trump complained Monday he was "all alone" in the White House as the US government shutdown hit a third day, even plunging the nation's main Christmas tree into darkness.

With Congress out of town and the debate over Trump's demand for a $5 billion US-Mexico border wall at an impasse, the president sat holed up, tweeting no less than 10 times by early afternoon to lash out at opponents and reject responsibility for a plummeting stock market.

"I am all alone (poor me) in the White House," tweeted Trump, who had to delay his annual Christmas holiday in Florida because of the crisis in Washington.

Trump said he was "waiting for the Democrats to come back and make a deal on desperately needed Border Security."

However, the Democrats -- and some Republicans -- have made clear they will not vote for Trump's cherished border wall. In retaliation, Trump is refusing to sign a broader spending bill, triggering a standoff that has left swaths of the US government temporarily without funding.

The National Park Service tweeted that it would remain unlit and closed to the public "until further notice," with checks being made for damage following an attempt by an intruder on Friday to climb the tree.

The parks service is one of the many state institutions suffering from the funding suspension.

The budget standoff could drag on into January, when the new Congress is seated, although negotiations were planned for Thursday, offering a glimmer of hope.

Trump made a Mexico border wall one of his main campaign promises and the idea is popular with many Republicans backing the president's message that illegal immigration is out of control.

Democrats and some Republicans in Congress oppose the plans as impractical, unnecessary and fueling xenophobia against Central Americans.

I am all alone (poor me) in the White House waiting for the Democrats to come back and make a deal on desperately needed Border Security. At some point the Democrats not wanting to make a deal will cost our Country more money than the Border Wall we are all talking about. Crazy!

The government shutdown adds to uncertainties spooking global stock markets after a tumultuous week in which respected Defense Secretary Jim Mattis resigned and the president stepped up attacks on the supposedly independent chairman of the Federal Reserve.

On Monday, the Dow Jones dropped more than 650 points, or 2.9 percent.

But Trump, who has repeatedly taken credit for good days on the markets, blamed the Fed for the growing sense of disarray.

Last week, the central bank hiked rates, infuriating Trump who has ignored a traditional respect for the Fed's independence, calling it "crazy", "out of control" and a greater economic threat than China.

In a tweet Monday, Trump compared the Fed to a blundering golfer "who can't score because he has no touch - he can't putt!"

Trump's Treasury Secretary Steven Mnuchin had spent much of the weekend in damage control mode following reports that Trump had privately asked cabinet members whether he has the authority to fire Fed Chairman Jerome Powell.

Mnuchin on Saturday quoted Trump as denying any plan to remove Powell.

And domestic issues are just part of the far from merry Christmas picture, with Trump also juggling a trade war with China and fallout from his abrupt decision to pull US troops from Afghanistan and Syria.

About three-quarters of the government, including the military, is fully funded through September 2019 but the partial shutdown forced several other major agencies to cease operations from Saturday.

The shutdown meant that more than 400,000 federal employees reported to their jobs on Monday without getting paid, while nearly 400,000 others "will be locked out of work with no pay," the American Federation of Government Employees union said.

"No private business or company would be permitted to impose on or disrupt the lives of their employees in such a manner," the Federation said in letters to the Senate and House of Representatives.

A deal to end the funding shortfall appears a distant prospect as Congress adjourned on the weekend for Christmas.

"It's very possible that this shutdown will go beyond the 28th and into the new Congress" which takes its seat in early January, White House budget director and incoming acting chief of staff Mick Mulvaney said.

But while trying to pin the blame on Democrats, Mulvaney, speaking on "Fox News Sunday," acknowledged that Trump's hardline stand played a role.

"This is what Washington looks like when you have a president who refuses to sort of go along to get along," Mulvaney said.