With border communities often connected by family, the World Health Organisation says there is a "high risk" that the virus will spread to Uganda.

With border communities often connected by family, the World Health Organisation says there is a "high risk" that the virus will spread to Uganda.

WESTERN UGANDA - Stormwater from the peaks of the Rwenzori Mountains swells the muddy Lhubiriha River that marks the often porous border between western Uganda and the Democratic Republic of Congo.

Less than 70 kilometres (40 miles) away, authorities have already confirmed one case of Ebola, part of the second worst outbreak of the virus now spreading in the east of the DR Congo.

Fearing Ebola will easily pass across the deeply intertwined border communities, which share family ties, farms and markets, international organisations are working to keep the frontier on high alert.

"I'm scared," says 50-year-old Stephania Muhindo as she eyes her home village of Lhubiriha on the Congolese side of the river, shortly after crossing a bridge to Mpondwe in Uganda.

"Ebola hasn't reached our village but I hear it's coming."

Around her, Red Cross volunteers marshal edgy commuters, directing them to wash their hands and shoes in chlorinated water and have their temperature taken for signs of fever before they are permitted to cross into Uganda. 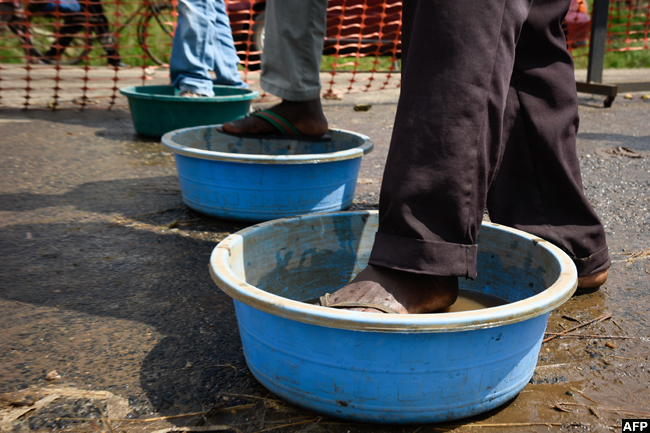 Regular travellers have red rashes on their hands from repeated washing in the harsh chlorine, one of several measures to try and prevent the virus from spreading. 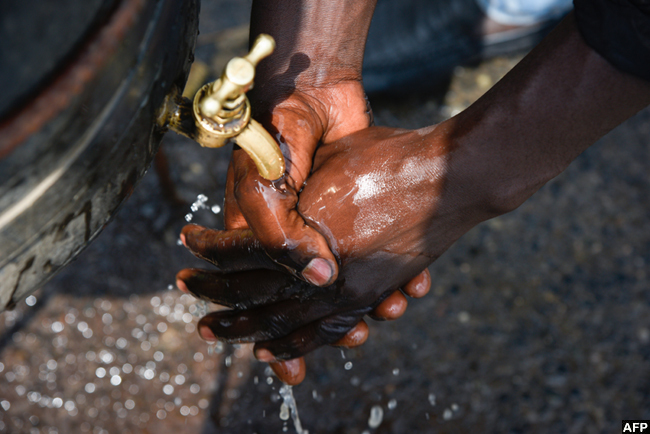 Several times a week Muhindo crosses to Uganda to stock up on supplies for her salt shop before returning to the DRC.

Since Congolese authorities declared an outbreak on 1 August more than 300 people have died from the haemorrhagic fever, spread by contact with the body fluids of an infected person - with a death rate of almost 60 percent.

With border communities often connected by family, the World Health Organisation (WHO) says there is a "high risk" that the virus will spread to Uganda, which has already had several scares.

"We have relatives in Congo, subsistence farmers have a garden here and another garden in Congo, children can live on one side and go to school on the other side," explains Samuel Kasimba, a local health official in charge of coordinating the effort to stop Ebola from entering Uganda. 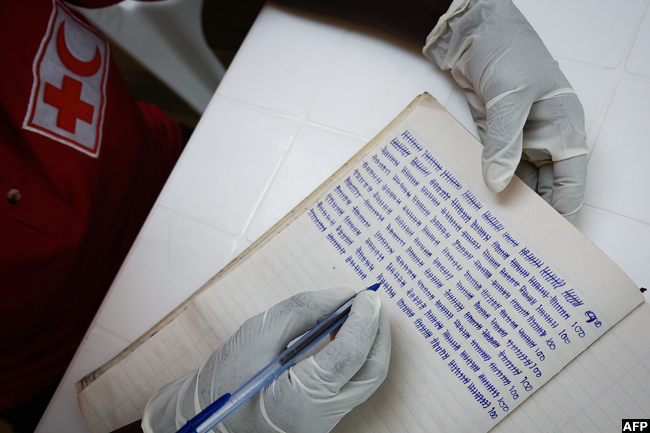 On twice-weekly market days more than 20,000 people cross the border at Mpondwe and the festive season is expected to see even greater numbers moving between the two countries.

"Christmas is a particular concern because we know there is a lot of movement as people buy food and visit family," says Andrew Bakainaga a senior WHO official in Uganda.

On 23 December, the DRC is scheduled to hold long-delayed elections and with a history of political unrest there is a concern that people may flee to Uganda increasing the chance the virus will reach the neighbouring country. 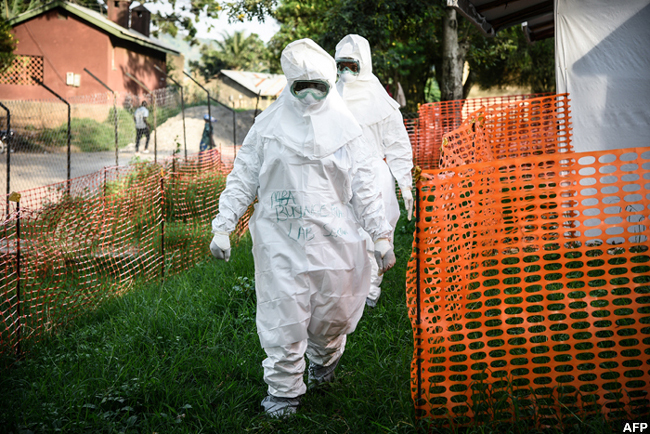 More than 123,000 Congolese refugees have come to Uganda seeking refuge from communal violence in the past year.

Kasimba, the Ugandan health official, is focused on identifying suspected cases as early as possible.

"We aim at detecting any suspected cases early, before that person has many contacts. We use radio programs and village health teams to educate people about Ebola," he explains.

"Confirmed cases are within 70 kilometres and this distance keeps on reducing. The outbreak is moving closer to Uganda. In case it comes, God forbid, we are ready." 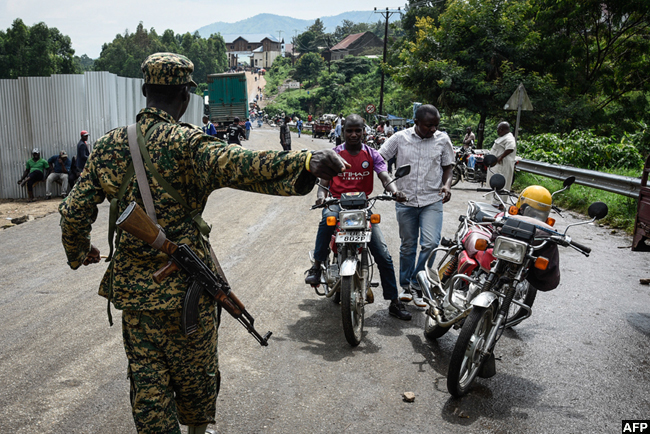 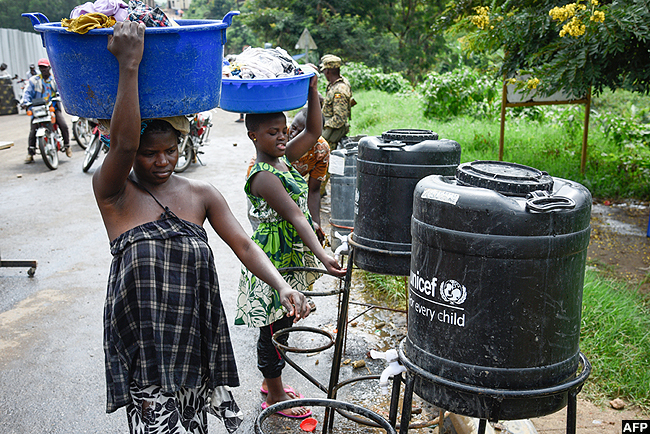 Suspected cases are rushed to the grounds of Bwera Hospital, six kilometres from the border, where a newly constructed isolation ward sits inside white tent-like structures.

Without any patients during a recent visit, Esther Businge and Joseph Kamabu rehearse donning the layers of protective suits they hope will keep them safe.

Without any skin left exposed it is difficult to tell who is who so the pair use a marker pen to write each other's name on their disposable gowns.

The ward is carefully divided between green - clean - and red - potentially contaminated - zones and before crossing into the red zone both carefully examine themselves in a mirror to ensure they are as protected as possible.

The pair move slowly and awkwardly, as if in zero gravity.

"My old mum was a bit scared when I started because I took the blood sample from the first suspected case alone," says 55-year-old Businge, a lab technician.

"I tell her that I am trained and it will be fine but I hear that 24 nurses in Congo have died," she says. 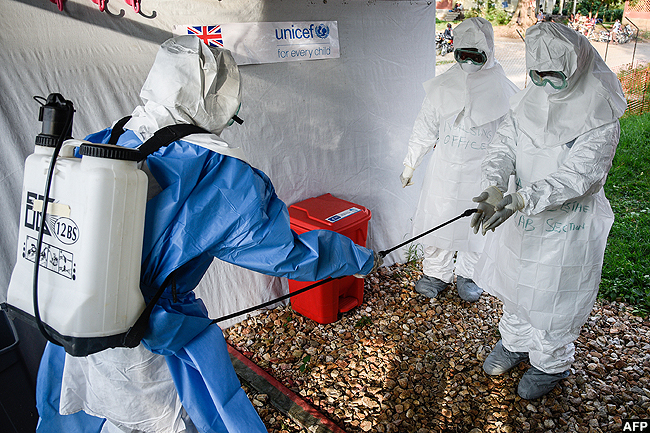 During the worst ever Ebola outbreak which hit three west African countries in 2014, many health workers died from the disease.

In collaboration with WHO, Ugandan authorities have vaccinated about 3,000 frontline health workers with an experimental drug designed to protect them against the virus but fears remain about its effectiveness.

"After a couple of hours in these suits we are covered in sweat. When they're wet they tear easily and absorb moisture. What if a patient vomits on it?" asks Businge.

Back in Mpondwe, Muhindo prepares to make the return journey across the dilapidated bridge to her village.

"I'd like to be vaccinated but they say there is not enough for everyone," she says.

"I'll go home to Congo because I have nowhere else to go."