Govt on track to achieving middle income s...
Next Story

“Girls are often more vulnerable than boys in community because of their biological make up but also some cultures are against girls.

FAWE Uganda members posing for a group photo at the get together and networking event. (Photos by Wilson Manishimwe)

“Girls are often more vulnerable than boys in community because of their biological make up but also some cultures are against girls.

Women leaders have called for more girl children empowerment programes by government in a bid to end challenges they face in communities such as school dropouts, child marriages among others.

They argued that although there have been efforts geared towards promoting girl child education there are still a number of hiccups hinged on the patriarchy societal setting that have hampered equality.

During a get-together event organised by Forum for African Women Educationists Uganda (FAWEU), leaders said challenges such as child marriage, defilement among others need to be fought against. 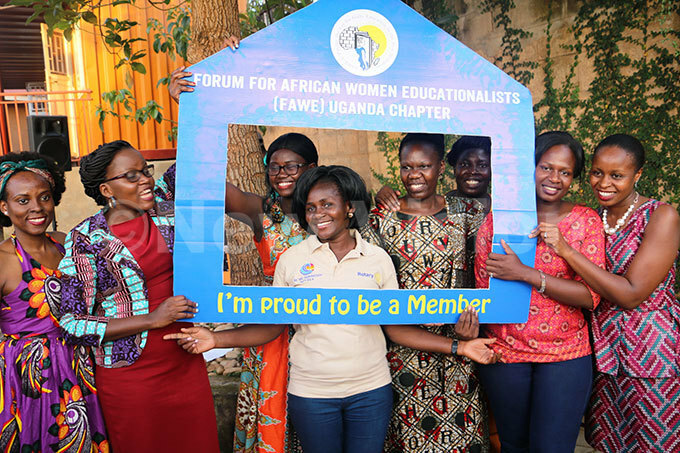 Grace Nanyonga, the current president of Rotary Club of Mukono and CEO Grana Fish Supplies Limited and other alumni at the FAWE Uganda members networking get together event

"Girls are often more vulnerable than boys in community because of their biological make up but also some cultures are against  girls.

As you may know even at universities and other institutions, challenges such as sexual harassment have quite often negatively impacted on girls' lives," said Susan Opok Tumusiime, the FAWE Uganda executive director.

She said: "We are working closely with different ministries such as gender and education to ensure girl child empowerment is achieved."

Irene Nantogo, proprietor of G-Teen magazine said, "Some tradition practices and norms still prove a great torment to society because they encourage early marriage of girls".

According to United Nations 2018 General Assembly, about 132 million girls are out of school globally. Equally, even for the few that make it to school, several challenges limit their ability to complete school.

Girls suffer discrimination both at home and school, lack of sanitary towels to use during their menstruation periods, early marriages, early pregnancies especially in rural societies.

In Uganda, less than 20% of girls enrolled in primary schools complete Primary Seven.

Recently, there has been increasing fear that more adolescent girls in developing countries are joining the informal labour sector as a way to sustain their livelihood  these subsequently suffer exploitation and earn a peanuts pay.

Ruth Invumenta Kavuma, one of founder members of FAWE stressed the need for continued support of girl child education saying it is a life time investment for the girl child and the nation at large.

MPs, ministers too many, says Ssebutinde