Congo elections: Calm before the storm?
Next Story

The Danish head of Mission in Uganda, Majbrit Holm Jakobsen speaking at the PWDs event in Kampala.(Photo by Jeff Andrew Lule)

PWDs-Uganda has been applauded for taking tremendous steps in uplifting the lives of Persons With Disabilities (PWDs).

The Danish head of mission in Uganda Majbrit Holm Jakobsen said Uganda has enacted relevant legislations and policies in favor of the handicapped people, which have not been achieved by many other countries.

She noted that the laws in place, is a big step to boost their (PWDs) welfare after it ratified the United Nations Convention on PWDs.

"Unlike other governments in the world, Uganda has performed excellently well its efforts to protect t rights of PWDs and consider their welfare though the resources have not always been on their side," she said.

She was speaking during the celebrations to mark the 20 years of partnership between the Ugandan and Danish disability movement at Imperial Royale Hotel in Kampala.

She noted that the inclusion of disability rights in the constitution affirms the government's commitment towards supporting PWDs.

"The enactment of disability sensitive legislations and provisions of several laws and policies like Persons With Disability Act, University and Tertiary Institutions Act, Nation policy on Disability, Traffic and Road Safety Act, ranks the country highly in terms of solving the PWDs issues," she added.

She also pointed out the laws that provide for the representation of the PWDs at all levels of leadership; saying they have strengthened the disability movement in Uganda.

"This has enabled them appoint representatives of PWDs to different boards, commissions, university councils among others," she noted. 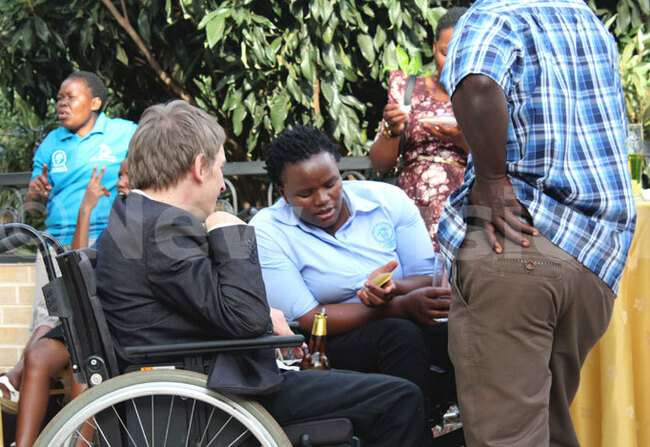 Some of the PWDs sharing at a cocktail sharing a moment. (Photo by Jeff Andrew Lule)

Describing the journey of PWDs in Uganda, Edson Ngirabakunzi the Executive Director National Union of Disabled Persons of Uganda (NUDIPU), thanked government of Uganda for enacting such laws, stressing that they (PWDs) were considered non-existent beings before several laws were put in place.

"Until we began to organise in earnest during the 1990s, we as deaf people for instance, could not even communicate or make our presence felt in the public space," he noted.

Ngirabakunzi spoke warmly of the Danish embassy that took the lead in advocating and fronting the issues of PWDs in the country.

"This brought the Danish-Ugandan development cooperation that focused more on the rights work and advocacy rather than just on delivering services and disability equipment," he said.

Ngirabakunzi noted that he has confidence that Ugandan disability movement will continue to forge ahead even without Danish funding, some of which has been spent on capacity building, training in advocacy and lobbying.

"We have come a long way, thanks to the support from Denmark. But it's obvious that we need to work even more on capacity building so that we get the young generation on board," he said.

Teis Piel Christensen, the coordinator, Disabled People's Organisation Denmark (DPOP) encouraged the disabled persons in the country to use the various platforms and freely seek/demand for services from government.

"It is also important to attract support for capacity building, training and exchange of experiences with like-minded partners from the Danish disability movement," he noted. 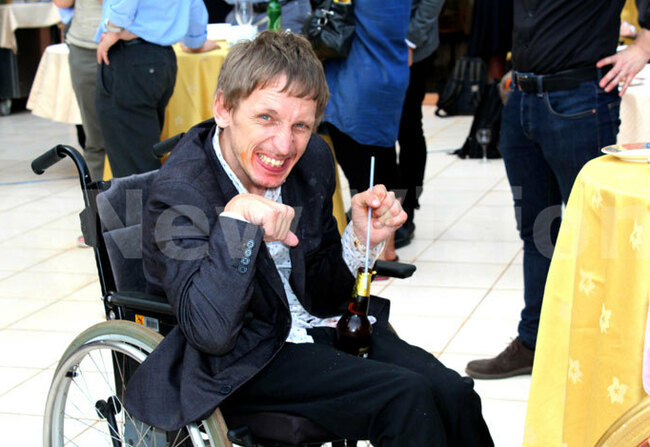 One of the PWDs enjoying a drink at a cocktail.(Photo by Jeff Andrew Lule)

The colorful event brought together a total of 15 Ugandan and 12 Danish disabled people's organisations to reflect on the success of their partnership in the past 20 years.

The event was climaxed with a cocktail dinner with various snacks and drinks where PWDs and various partners shared a moment of interaction, had a toast accompanied with soft music.

It was joyous as some of the PWDs took up the stage to dance away the year.