“We have a team in place that is probing whether there was criminal negligence, political subversion, economic crime and, where possible, terror."

“We have a team in place that is probing whether there was criminal negligence, political subversion, economic crime and, where possible, terror."

KAMPALA - The Internal Security Organisation (ISO) is probing the criminal element in the tragedy, where the MV Templar destined to K-Palm Beach Resort in Mukono capsized near Mutima Beach Resort on Saturday, November 24, leading to the loss of 32 lives.

A total of 27 revellers were rescued and some others have been reported missing.

ISO Director General Col. (rtd) Kaka Bagyenda, in an interview with the New Vision, confirmed that a team had been put in place and they had started their investigations.

"We have a team in place that is probing whether there was criminal negligence, political subversion, economic crime and, where possible, terror," Kaka said.

He said their investigations would supplement the ongoing probe by the Police. Bagyenda said they were interested in interviewing some of the survivors, although they were aware that some of them were hiding from the public.

"Yes, we would be interested in interviewing as many of the survivors as possible, but most of them do not want to be exposed. We are aware that some of them were bigshots, especially in the business circles, while some are university students who wouldn't want to be associated with the tragedy," Bagyenda said. 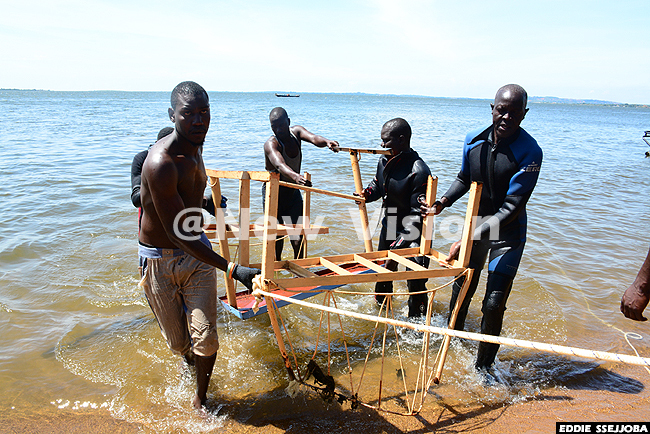 Rescuers pulled out parts of the wreckage from the waters

They also summoned Buganda prince David Wasajja, who by Monday, had not yet recorded his statement.

Kaka also noted that it was possible the boat was overloaded, but that most people were saved by the local fishermen.

President Yoweri Museveni, in a statement he issued a day after the accident, said the private boat owned by one Templar Bisase and his wife, was seemingly overloaded because, whereas it had capacity for 50 people only, it had about 120 passengers on board. Bisase and his wife were among.

The President said: "Obviously, the operators of this boat will be charged with criminal negligence and manslaughter."

It seems the boat was overloaded because whereas it had capacity for 50 people only, it had about 120 passengers on board, who also seemed to be partying with a lot of music. They might not have heard the emergency commands of the captain, who is still unaccounted for.


Security is also hunting for a local welder and tractor driver, who were hired by Bisase to patch up holes in the boat and also push the boat back into the water. The two reportedly disappeared shortly after the incident. There are fears that during the process of pushing the boat back into the water, the tractor created a hole in the area that had just been welded, allowing in water.

A Sunday Vision investigation had earlier on revealed that the late Templar did not use a vacuum sander, which is a power tool designed to use abrasion using imported sand to determine how much worn out a section of the boat is, before welding can start.

Capt. Richard Coon, a South African national, who has over 25 years' of experience in marine and also the manager of the Munyonyo Resort Hotel Marina and is one of the few experts on maritime, said Uganda lacks experts who would handle welding damaged boats.

Coon insisted that Templar needed to fi rst sandblast the boat, to determine the quality of steel and, then, remove all the rust, before he embarking on repairing it.

"He should have replaced the whole hull (lower deck) with maritime steel and not used any other steel," Coon said.

He also noted that Templar should have carried out pressure-testing before the boat would sail. He revealed that the process of sandblasting was costly, but it would have saved lives.

The maritime expert also revealed that the boat did not have a water pump on board that would have enabled them pump out the water that had already flown in. 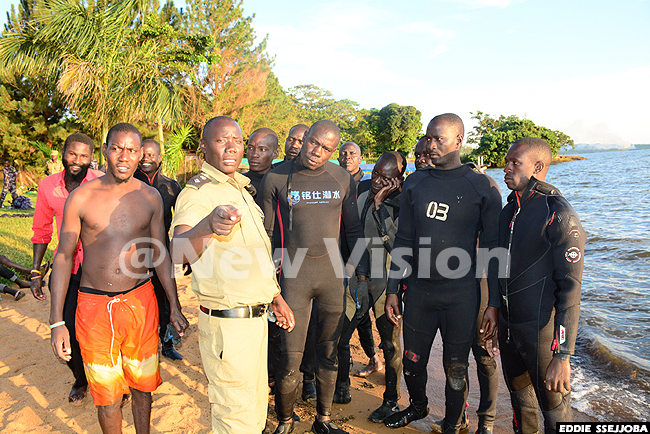 Kaka was also grateful for the efforts by the divers from the Special Forces Marine, the Uganda People's Defence Force, the Police Marine and the fi shing community around the area for saving lives and recovering the bodies of the deceased and the boat.

He noted that they were aware that some elements wanted to cash in the incident and had submitted over sh2b request to the Government to recover the boat.

He noted that the little money that had been requested for salvaging the boat by security agencies was not forthcoming and they were forced to use their operational funds.

Hailing the team that secured the wreckage for investigations, works minister Monica Azuba said: "We are happy that we have been able to remove the hazard (boat) from the water and now navigation can be safe."

She noted that they were aware some political elements had planned to use the incident to build up political capital and also expose the Government as incompetent, especially had they failed to recover the wreckage of the boat.

She promised to detail the costs of the operation at a later date. Assistant Inspector General of Police Asuman Mugenyi headed the search and resue team, which included the army, Police, fishermen, and residents at Mutima beach.

Why I declined to steer ill- fated boat — captain

I rejected a SH5b offer for my farm

Is biofuel the solution to our energy problem?