WHO says creating panel to study gene editing
Next Story

PIC: US President Donald Trump and First Lady Melania Trump arrive to pay their respects to former US President George H. W. Bush as he lies in state in the US Capitol's rotunda in Washington, DC on Monday. (AFP)

President Donald Trump and First Lady Melania paid their respects Monday to late president George H.W. Bush, whose remains lay in state in the US Capitol.

The Trumps made a brief visit to the Capitol rotunda, where Bush's flag-draped coffin was resting as part of tributes to honor the 41st US president and commemorate his extraordinary life.

Bush died peacefully Friday at age 94, at his home in Houston, a passing that led Americans to reflect on his life of duty and service to country as a leader of the so-called "Greatest Generation."

Only the second president to see his son follow him to the Oval Office, the Republican stalwart is being honored with four days of commemorations and services in Washington and in Texas, where he will be buried Thursday.

Trump is scheduled to attend a state funeral service Wednesday at Washington National Cathedral -- the first presidential funeral since Gerald Ford died in 2006.

But late Monday, after Bush relatives and dignitaries had gone, the president was driven from the White House up to Capitol Hill.

With the first lady at his side, Trump saluted, and they stood at Bush's casket for about a minute. They exited the rotunda with little fanfare.

Bush never warmed to Trump, and he had let it be known that he did not vote for him in 2016. Trump himself has criticized the elder Bush on the campaign trail.

But on Monday, Trump wrote members of Congress to hail Bush as a man who "led a life that exemplified what is truly great about America."

"President Bush worked selflessly throughout his long life to bring about a world of justice and lasting peace," he wrote.

Military pallbearers carried the flag-draped casket into the rotunda as a fiery sunset bathed Washington in a glow. 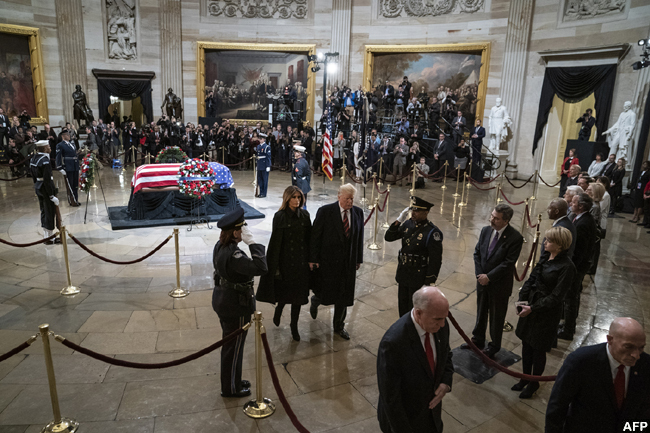 The somber ceremony was attended by his son George W. Bush -- the nation's 43rd president -- and other relatives, dignitaries and more than 100 members of the House and Senate.

Senate Majority Leader Mitch McConnell lauded Bush -- who occupied the White House from 1989 to 1993 -- as a patriot who steered the country as straight as he had piloted his World War II airplane.

"He kept us flying high and challenged us to fly higher still. And he did it with modesty and kindness that would have been surprising in someone one tenth as tough and accomplished as he was," he said.

Bush was transported aboard the presidential Boeing 747 -- made available at Trump's direction -- from Houston to Joint Base Andrews, in Maryland.

In Houston, relatives including his presidential son stood with hands on their hearts as the casket was carried to the aircraft.

Bush is the 12th US president to lie in state in the rotunda. Just three months earlier, the honor was accorded to senator John McCain, a former Republican presidential nominee who died of brain cancer.

Hundreds of members of the public began quietly filing in to the Capitol late Monday to pay their final respects.

Among them was Kim Frinzell, a government employee who did not vote for Bush but grew to respect his accomplishments, including signing the 1990 Americans with Disabilities Act.

"The fact that he could cross party lines, and did that so gracefully, especially after his presidency, to me is really inspiring and a lesson that our current administration can learn from," Frinzell, 56, told AFP. 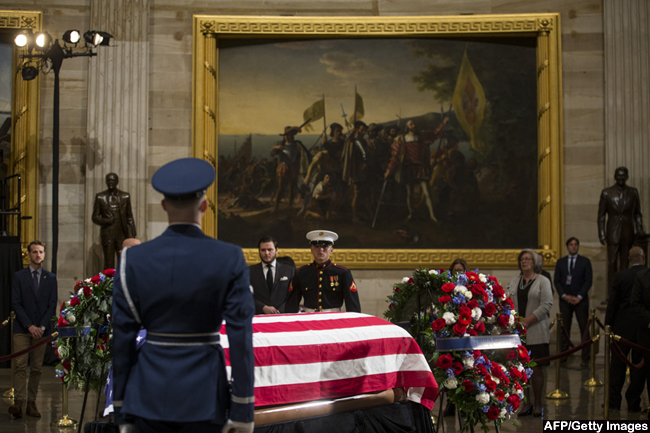 Bush will be honored at a state funeral service at the cathedral on Wednesday, which Trump has declared a national day of mourning.

Bill Clinton will be among the living US presidents to attend, along with dozens of foreign leaders including Germany's Angela Merkel.

On Thursday, Bush will be interred at the George H.W. Bush Presidential Library Center in College Station, Texas, next to his wife Barbara, who died in April, and their daughter Robin who died of leukemia at age three.

Bush's political locus was foreign policy and America's place in the world, and he claimed successes including navigating the end of the Cold War and marshalling a global coalition to eject Iraqi troops from Kuwait in the first Gulf War.

But despite Bush's record approval ratings after "Desert Storm," he disappointed Americans on the domestic front. The US economy slid into recession in 1990, and recovery was sluggish, conditions which contributed to his 1992 election defeat by Clinton.

House Speaker Paul Ryan alluded to that political setback in his Capitol remarks and said Bush handled defeat with grace.

"He was the first president to teach me that in a democracy sometimes you fall short -- and that how you handle that is just as important as how you win," Ryan said.

How investment is progressing on the Kampala Industrial & Business Park