The traders who use the route from Kashari to Mbarara town were over 100 in number, they made a peaceful procession up to the council offices.

The traders who use the route from Kashari to Mbarara town were over 100 in number, they made a peaceful procession up to the council offices.

MBARARA-Business at Mbarara Municipal council was on Wednesday afternoon brought to a standstill when traders dealing in matooke stormed council offices demanding for an explanation over double taxation.

The traders  who use the route from Kashari to Mbarara town were over 100 in number, they made a peaceful procession up to the council offices.

They accuse council of putting a road block on Mile four on Mbarara-Ibanda road where they are charged sh300 each matooke and again charged the same  when they reach in Rwebikona market which they say is unbearable. 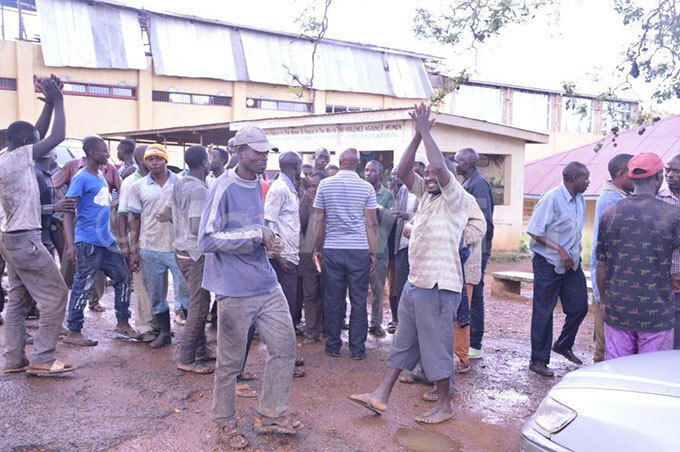 Matooke traders after the fruitful meeting with the  RDC

Aaron Turyahebwa one of the matooke traders from Bubare sub county Kashari County told New vision that prior they have been paying once at Mile four and they would be allowed to sell their matooke in town.

"Since this week began council has now put another person who forces us to pay double after reaching Rwebikona market and when you refuse they impound your bicycle with all the matooke, load you on the pick up and take you to the cells, we came here to have our issues resolved but to our dismay all the offices have been closed, no one is in office" said Turyahebwa.

He adds, "we are paying double tax which we cannot allow, on top of that they again torture you and make you pay heavy fines, if they want to treat us like that let them give us license for a year so that we become like these shop owners in town, this is too much, we want them to tell us to whom should we pay the dues.

Nathan Gareba also a matooke trader echoed the same saying on Monday they were shocked to find people on the same route demanding them for money.

Lt. Col James Mwesigwa the RDC Mbarara summoned the deputy town clerk Richard Mugisha to his office to explain how and why they are double taxing citizens.

In his explanation, Mugisha revealed that the policy provides for loading fee and market fees, he said what these traders are paying at mile four is loading fees.

"we agreed that for whoever passes his bicycle of matooke in Kakika division should pay loading fees and when that person reaches in the market where he is going to sell his matooke should pay market dues" Mugisha explained. 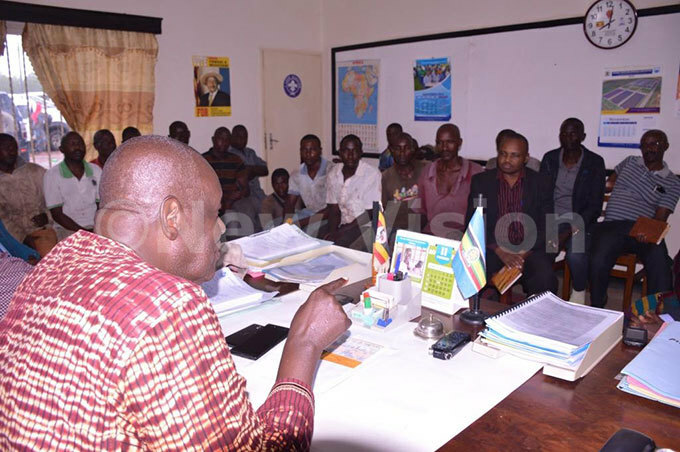 This forced the RDC Lt. Col Mwesigwa to interject and vehemently rejected double taxation of any citizen carrying out business in town.

"I think Mr. Mugisha what you agreed upon is not workable, everything has to be within the law, if it is done outside the law then know it is wrong, the law says you pay tax at the last point where you are going to sell from not on the way to the market.

The reasons as to why people pay these market dues it is because of the facilities that were put by council like toilets, water and even collecting garbage, now why do you  tax someone moving on the road, what facility have you provided him with so that he pays you?

Mwesigwa noted that if council wants to collect dues, let them open markets so that they can collect revenue from the markets not on the roadsides.

"Taxing should be at the last destination which is a market, i don't want to hear this again if council made a mistake to award these tenders find ways of handling it but I don't want these people to suffer, if President Museveni came here today and these people put up their hands  and said they are being double taxed on a daily, we would be with no jobs"

On torture by enforcement team, Mwesigwa assured the matooke traders that this is not going to happen again. "At least I am going to fight for you if they happen to torture you again, call me they torture us together, there are certain things I will not tolerate in Mbarara"

He later ordered the traders to go back and do their businesses and pay dues once in a day .

Security in Busia beefed up as campaigns gather pace