My HIV positive wife refuses to be put on ...
Next Story

He told me that he had thought deeply and prayed.

He told me that he had thought deeply and prayed.

PIC : Nabalayo with her father and grandmother. Sometimes she reminds him to take his medicine

Vision Group has dedicated this month to rally the population back into a focused battle against HIV. Deborah Faith Nabalayo is a daughter of Dr Stephen Watiti, an HIV/AIDS activist.

Her mother died of AIDS when Nabalayo was barely four years old. She shares her experience of growing up with her father who later revealed to her what killed her mother. She talked to Elvis Basudde

I only see my biological mother in photos. My daddy told me she died when I was barely four years old. But I could also vaguely recollect the time she died. I remember seeing people crying, especially my daddy.

I still remember a woman who lay in a wooden box, looking so peaceful. That was my mum. Some people held me by my hand and made me have a close look at the mummy in the coffin. She looked as if she was asleep.

My young mind was convinced that it was a matter of time before she could wake up and life would go on. She never woke up from that sleep. As I grew up, I would ask my father where my mother was until he revealed to me in no-round-about way, "Your mother died! When you grow up I will tell you what killed her. 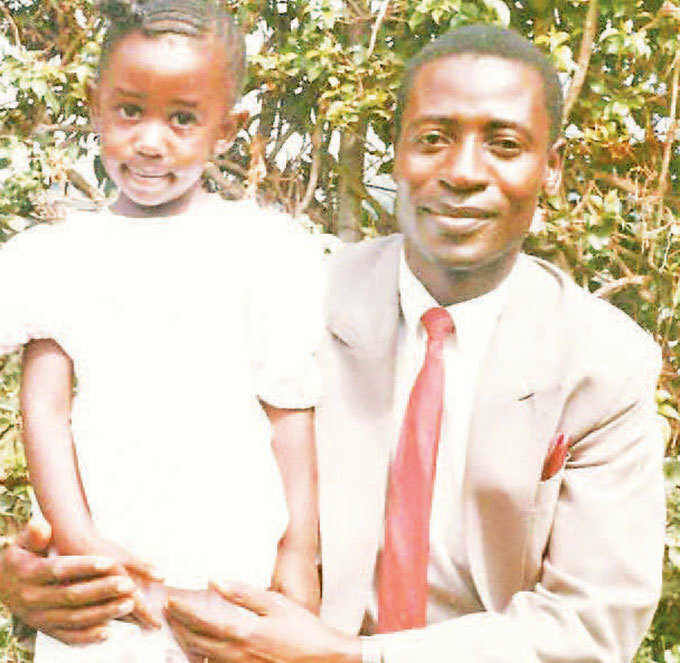 Nabalayo with her father in the early days

" I grappled with her death, into my adulthood. I often asked my father about the realities of heaven and if indeed we would get to see her again someday, tomorrow maybe? I had more than enough questions, asking God why He killed my mother if He truly loved us. Will I get another mother?

How do I explain this to my friends? How did she die anyway? I was always inquisitive and generally asking many questions. I needed answers; I needed someone to justify her absence and that void in my heart.

Since mum died, I have grown up with my father. My father was my first best friend, a friendship that would prove to be beneficial to both of us for years to come. When I reached Primary Four, my dad enrolled me in a boarding school. I was so confused and upset as to why I would be ‘thrown' there.

I had no idea at that time that this was a move by my father to protect me from seeing him struggle with his health.

He became clinically ill and we almost lost him! It was as bad year for the family. He amazingly recovered from the ordeal, but during the next holiday, I saw him take some medicine that looked exactly like the ones a girl in my class was taking.

I heard other children at school whisper that the girl had HIV, just like we had studied in class that people living with HIV take some tablets on a daily basis. The big revelation My father explained to me that he was HIV-positive and that the drugs were indeed ARVs helping him keep healthy. 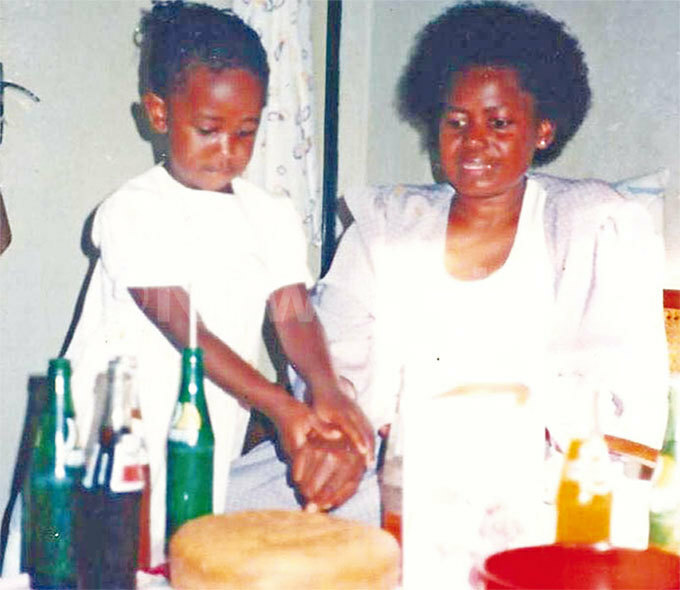 Young Nabalayo celebrating a birthday with her mother

That was the same day he revealed to me that my mother had succumbed to AIDS. My mind was fi lled with many questions.

Was my father going to live long? Wasn't he going to leave me the way my mother did? I asked my dad all the questions I had. He then sat me down, for "the big talk" that changed my life.

He told me that in 1972, he became a committed Christian and learnt that sex outside marriage was a sin and so he never had any sexual encounters until he got married to my mother in 1985, aged 31.

He said he married my mother, Margaret, who was his high school sweetheart on December 21, 1985 and they were both virgins on their wedding day. He said they never had premarital HIV tests.

But their joy was shortlived as their first born son died in 1990 due to sickle cell anaemia. In 1989 they had me as their second baby and in 1993 they decided to have their third. "We then discovered we were both HIV-positive.

Your mother never recovered, she had a premature baby who died soon after. She died in much pain on June 7, 1994. I had to tell you this because you are now mature enough," he told me. I was shocked by the revelation.

I returned to school, but my mind and heart were disoriented, the reason my grades suffered. I realised I was depressed. I was not concentrating until my father brought two of his friends to school to counsel me.

It was then that I was able to pick up and excel in my Primary Leaving Examinations, enough to fulfi l my dream of going to high school. I went to Gayaza High School for six years and, thereafter, pursued my bachelor's degree in Food Science and Nutrition at UCSI University, Malaysia.

I felt I had come to terms with my dad's health status and even I would remind him on occasion to take his medication. I was convinced that God would heal him of the disease before anyone else got to know.

Society had inadvertently taught me that it was not a topic to be openly discussed. I was doing well in my new school and life was good until I got a phone call from my dad when I was in Senior Two.

He told me that he had thought deeply and prayed. He wanted to go public about his HIV status because he wanted to help professionals from all disciplines, especially the medical fraternity.

I was sure my father had lost his mind and I truly wanted the ground to swallow me. During the phone conversation, my father said by going public, he wanted to overcome stigma in the frontline fi ght against HIV/AIDS. He said given the present circumstances in Uganda, where many professionals and people who could afford ARVs were dying because of fear, it was important that someone volunteered to fi ght in the open.

His story was published in New Vision the following day and I was just scared to the point of sickness. I felt I was exposed to the whole world because people knew he was my father. Many people who read our family story either did not know what to say to me or simply gave me pitiful stares.

Sharing experience One unexpected thing happened though. A student at my school approached me and shared her own family story and how she felt my dad was courageous for stepping out to be a face of HIV/AIDS.

She felt relieved that her own parents stood a chance to live a long life. The rest is now history. Many children in this country have grown up either with HIV/AIDS or have lost parents and relatives to the disease.

But unfortunately, some people are not aware or are living in denial or they are keeping it as a family secret. I am personally glad my father was brave enough to tell me the truth at an early age and explain it to me.

And more so I am proud that he did not let the shame around HIV/ AIDS keep him from sharing his story with the world. His courage is one reason I believe he has managed to live a much longer life and adhere to his medication.

Some burdens are just easier borne when shared. We need to break the silence and stigma around HIV/AIDS if more people who are affected are to live better and longer lives