He Jiankui tell a biomedical conference he is "proud" to have successfully altered the DNA of twin girls born to an HIV-positive father.

He Jiankui tell a biomedical conference he is "proud" to have successfully altered the DNA of twin girls born to an HIV-positive father.

PIC: Chinese scientist He Jiankui speaks on the stage at the Second International Summit on Human Genome Editing in Hong Kong on Wednesday. (AFP)

The Chinese scientist who claims to have created the world's first genetically-edited babies defended the highly controversial procedure Wednesday, but announced a halt to the trial following an international outcry.

He Jiankui told a packed Hong Kong biomedical conference he was "proud" to have successfully altered the DNA of twin girls born to an HIV-positive father, an apparent medical breakthrough.

But details of the experiment, which has not been independently verified, triggered an immediate backlash, with experts denouncing He's work as an ethical "mess".

"The clinical trial was paused due to the current situation," said He. "For this specific case, I feel proud, actually, I feel proudest."

The university professor said the twin girls, born a few weeks ago, had their DNA altered to prevent them from contracting HIV. Eight volunteer couples -- HIV-positive fathers and HIV-negative mothers -- signed up to the trial, with one dropping out before it was paused.

He said there had been "another potential pregnancy" involving a second couple, but when questioned further agreed it had been a chemical pregnancy -- a term referring to a very early miscarriage.

The experiment has prompted heated debate among scientists over the risks involved. Editing human embryos can create unintended mutations in other areas -- so-called "off-target effects" -- which can have an impact through the lifetime, experts warned.

"The volunteers were informed of the risk posed by the existence of one potential off-target and they decided to implant," He said Wednesday, as he was bombarded with questions about the trial.

He also said he had personally paid for most of the patients' medical expenses, and that his university in the southern Chinese city of Shenzhen had been "unaware of the study's conduct."

Southern University of Science and Technology distanced itself from He, saying he had been on unpaid leave since February and had "seriously violated academic ethics". 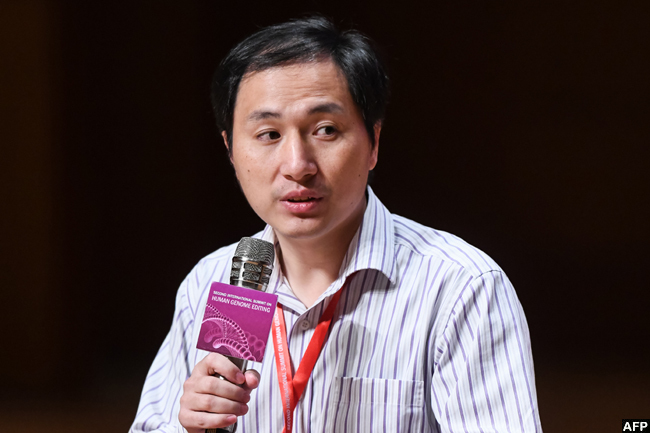 Organisers of the Second International Summit on Human Genome Editing also said they had not known about He's work.

Conference moderator Robin Lovell-Badge said He's trial was a "backward step" for the science industry, but described the babies' birth as "momentous" nonetheless.

"This is an example of an approach that was not sufficiently careful and cautious and proportionate," he said.

"Clearly however... it is a momentous point in history."

Summit chair David Baltimore, a Nobel laureate, said there had been "a failure of self-regulation by the scientific community".

He, who was educated at Stanford University, said the twins' DNA was modified using CRISPR, a technique which allows scientists to remove and replace a strand with pinpoint precision.

But the co-inventor of CRISPR condemned He's trial as dangerous and unnecessary.

"My concern is that this experiment really shouldn't have happened," Feng Zhang told reporters at the conference. "What he has done was not transparent... does not represent science." 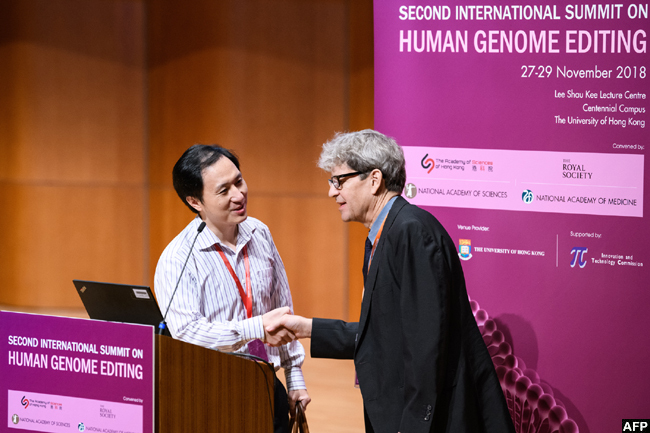 Gene editing is a potential fix for heritable diseases but it is extremely controversial because the changes would be passed down to future generations and could eventually affect the entire gene pool.

In many countries the editing of human DNA is tightly controlled.

He's experiment would be prohibited under Chinese laws and regulations, according to state media CCTV, citing remarks by deputy minister of China's Ministry of Science and Technology Xu Nanping.

A union of Chinese scientists issued a statement saying it "resolutely opposes so-called scientific researches and biotech applications that violate the spirit of science and ethics," Xinhua said.

There is a history of fraud within China's academic community -- including a scandal last year that led to the withdrawal of 100 "compromised" papers.

He has not released the identities of the participants of his trial.

"It would be really unfortunate... to have the world looking at the first two genome-edited children because think of the pressure that's going to put them under," said Lovell-Badge.

But University of Massachusetts Lowell assistant professor Nicholas Evans tweeted: "(D)on't get me wrong, privacy is vital here. But I am concerned that no one is ever going to get to independently corroborate the story."