How the Ugandan mafia is stealing from Chinese investors

In some of the cases, the mafias collude with officials in public offices including those in courts of law to frustrate cases that Chinese report against them.

In some of the cases, the mafias collude with officials in public offices including those in courts of law to frustrate cases that Chinese report against them.

Chinese investors have reportedly been paying crooked government officials to meet the President
Several Chinese investors have lost billions of shillings in well-planned dubious moves orchestrated by well-connected crafty Ugandan mafias, New Vision has established.
In some of the cases, the mafias collude with officials in public offices including those in courts of law to frustrate cases that Chinese report against them.
Investigations can reveal that whereas some mafias solicit for bribes from the Chinese, other shrewd ones take advantage of Chinese's ignorance of Ugandan laws to steal their money, especially in land matters.
Fleeced, sometimes with no course for redress in sight after getting no help from authorities, some of the distraught Chinese investors have turned to reporting the shrewd government officials to President Yoweri Museveni for action while others have for fear of victimisation.
The mafias contact the Chinese investors in the name of helping them overcome government bureaucracy before fleecing them. In some cases, government officials employ services of agents who take advantage of court processes to secure court orders through which the Chinese lose money.
"Some government officials or their agents engage the unsuspecting investors with all sorts of promises like; taking them to meet the President, securing for them free land or expediting processes to secure for them licences and tax holidays," revealed a source privy to the mafia dealings in the President's office.
The cases are many and varied, although our investigations could not find a definite figure of the cases as they are reported to different entities and some of the Chinese do not report their cases to authorities.
A Chinese national told New Vision that they sometimes do not report for fear of vengeance from the mafia group, especially those in public offices where they run all the time for certification or clearance of their documents.
Chinese investments
Besides the cordial relationship China has enjoyed with Uganda for the past 56 years, China ranks first in terms of foreign direct investment in Uganda.
As of July this year, Chinese companies had investments worth $4.2b (sh16 trillion) in Uganda, making China Uganda's largest source of foreign investment, according to Wan Li, the Director-General for African Affairs at China's foreign affairs ministry.
Besides individual investors, Chinese are putting up multi-billion dollar investments in industrial parks countrywide. So far, they have set up industrial parks in Namanve and in districts of Mbale, Tororo and Nakaseke.
In Nakaseke, they are building a $600m (sh2.29 trillion) industrial park that is expected to accommodate 80 firms and employ up to 16,000 people by 2025. 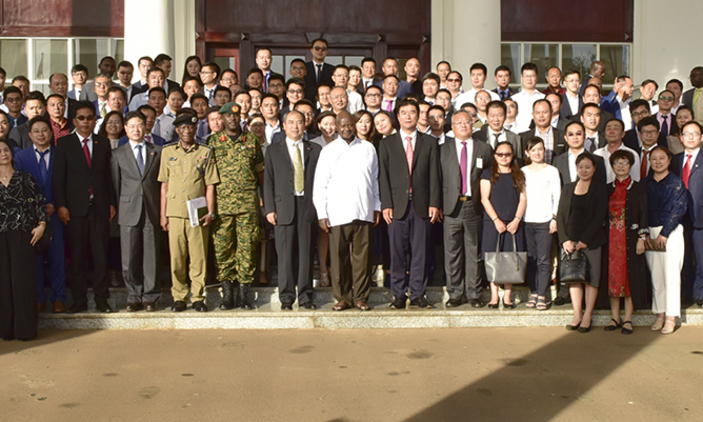 President Museveni poses for a photo with Chinese investors in Uganda after a meeting at State House Entebbe. PPU Photo

What would make you value your job?

Confidentiality at the workplace