US firm to invest sh186b in East African d...
Next Story

The NAADS boss Dr Sam Mugasi said, this hatchery was a presidential pledge to the group and in 2013, it was procured at sh50m.

The NAADS boss Dr Sam Mugasi said, this hatchery was a presidential pledge to the group and in 2013, it was procured at sh50m.

Residents of Nangabo Sub County at Kasangati in Wakison district are earning from an incubator that was donated by President Museveni through the National Agricultural Advisory Services (NAADS) secretariat.

The NAADS boss Dr Sam Mugasi said, this hatchery was a presidential pledge to the group and in 2013, it was procured at sh50m. He noted that the installation delayed because there was no permanent structure where it would be kept until the structure was set up and it officially started working in June 2018.

The reason was that farmers who are not selling eggs wanted to have their own hatchery and sell chicks and make their project grow.

Eng. John Bwengye, the chairman Nathada, NAADS gave the project 9000 eggs to begin with but because there was electricity problem, they did not get any promising output.

Compared to commercial hatcheries, Mugasi says, Nathada is cheaper and it does not discriminate, whether one is a member or not, anybody can hatch from there since its business and their day one chicks are cheap compared to other private incubators. Each goes between sh2000-sh2500. 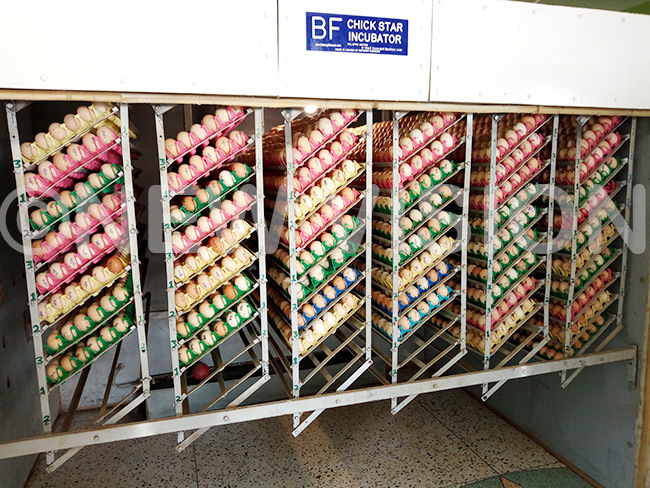 Some of the eggs in the incubation process

He promised to support them get parent stock in order to have quality chicks because at the moment, farmers take different eggs and get cross breed.

"I will take their proposal. They are now hatching all the breeds, which gives them less money but with parent stock, the chicks are expensive   and each goes at sh3000 and they are of good quality. Nathada farmers will now graduate to that," he noted.

Jackline Nakalyango, one of the beneficiaries says, she started hatching 150 trays and now she takes about 50 trays a week. "It's a good business even though we pay, that's little money compared to the outcome.  As other businesses, there are some damages because at times, some eggs do not get fertilised but the outcome is always good," Nakalyango noted.

Hatching manager, Aloysius Bbosa says, eggs take duration of 21 days to get ready output. When one brings eggs, they take 18 days in incubation and after 18 days, they are put in incubation baskets for three days and they are ready to be taken.

However, some damages occur, some do not get fertilided. Hatching percentage a week is 3000 eggs.

"Whether there are eggs or not, the incubator must keep running. About 500 farmers use it so far. We start hatching from one tray to 3000 trays a week. We receive eggs for hatching every Tuesday," says Bbosa.

He narrates that this incubator is supposed to run on three phase in terms of electricity but, it has single phase so it consumes a lot of power. In three days, it costs sh100, 000 which is still a challenge.

US, Britain push for UN sanctions on South Sudan