Lukwago, Kamya case adjourned to next year
Next Story

Government ought to implement children laws

Children amd Members of Parliament on the Forum for Children pose for a group photo during the World Children's Day celebrations by UNICEF and and other Child Rights NGO's in Uganda, at the Seven Trees Gardens, in Kololo on 20 November 2018. Photo by Miriam Namutebi.

Various child rights groups have criticised government for failure to enforce children laws that protect the rights of children enshrined in article 34 of the 1995 constitution.

According to Bernard Atiku the chairperson of the Uganda Parliamentary Forum for Children (UPFC), Ugandan children are subjected to various challenges like: child violence, child trafficking, child sacrifice, isolations and denial to basic needs, sexual violence especially to the girl child and child labour among others.

He attributes the challenges to laws that are not implemented and others not in line with the existing circumstances.

"It took the government almost  10 years to have the children's act amended and to conform to the existing international protocols. 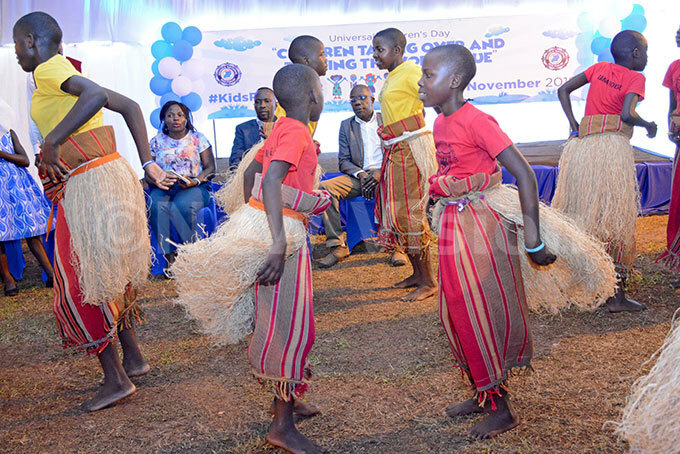 Children perform during the World Children's Day celebrations by UNICEF and and other Child Rights NGO's in Uganda, at the Seven Trees Gardens. Photo by Miriam Namutebi.

But finally we were able to amend it in 2016 however  to date the Ministry of Gender, Labour and Social Development has still not put in place a good regulatory frame work which would enable various agencies to implement the provisions within the act ," Bernard said on Tuesday  during the commemoration of the Universal Children's Day at Seven Trees in Kololo by United Nations Children Fund (UNICEF) and Uganda National NGO Forum (UNNGOF).

The day is celebrated in Uganda and the whole world after the Convention on the Rights of Children (CRC) was enacted on November 20, 1990 where 54 articles in the CRC spell out all rights of children aged 0-18.

Uganda became part of the CRC in 1990 there by assuming the obligation to undertake all appropriate legislative measures for the implementation of the rights recognised in the convention. Pupils from Kampala School of the handicapped during the World Children's Day celebrations by UNICEF and and other Child Rights NGO's in Uganda, at the Seven Trees Gardens, in Kololo. (Photo by Miriam Namutebi)

According to Richard Ssewakirwanga ,the Executive director of UNNGOF and one of the facilitators, he condemned violence against children saying laws that protect the children are weak and expose children to various challenges like drug abuse especially a which causes crisis in raising them.

"Children should work hard in order to avoid being victims of various child injustices, it's not good for children to go for labour yet they still have to acquire education." Ssewakirwanga said

"We should focus on such issues and children should know these are dangers to their wellbeing and it's important for adults to condemn these kinds of violence," stressed Ssewakirwanga.

Whereas article 35 of the1995 constitution gives a right to person's living with disabilities, children with disabilities are not inclusive in getting facilities in schools and in their communities accordingly.

"Community still rejects children with disabilities which deny them a right to education, heath living, socializing and actively participating in children activities. Community leaders have to come on board to help these children to feel included," he said

"If these laws are not enforced then children will still be excluded in society which affects their social wellbeing," he concluded

Brave Kakuru, a pupil with physical disabilities from KSPH was very excited to have participated actively during this year's Universal Child's Day.

"Today is a fantastic day I loved every single bit of it, I was able to contribute and participate alongside other children," he said