Busoga to swap sugarcane growing for anima...
Next Story

A teacher showing the damaged ceiling board. Photos by Moses Bikala

100 pupils at Iganga Municipal Primary School in Iganga municipality narrowly survived when a ceiling of the main hall caved in just five minutes before the start of the Science end of year examination.

One of the teachers said he had a loud bang from a distance and rushed to the scene only to discover that the entire ceiling was down.

The army had done some repairs at the school after the intervention of the former Chief of Defence Forces, Gen. Aronda Nyakairima. He paid a visit to the school during  Independence Day celebrations that were held at the school years back. 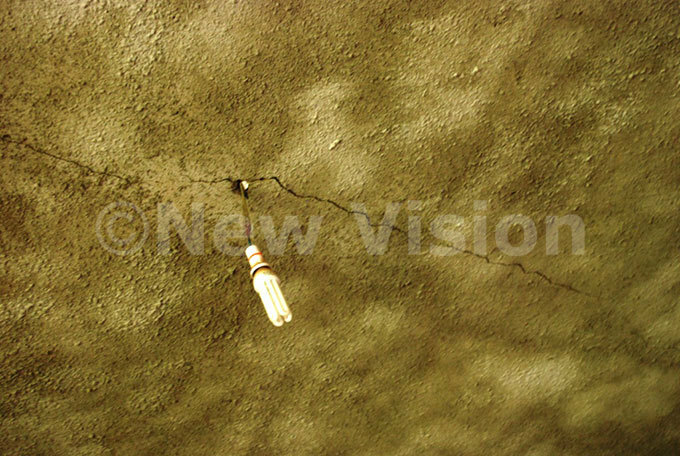 Cracks on another building in the same school

Nyakairima had during the celebrations donated sh70m towards renovation of the main hall ceiling board and promised to use the services of the UPDF engineering department carry out the work.

The NRM chairperson Iganga, Hajji Abubaker Walubi, who visited the scene moments later said the UPDF engineering department had put a heavy slab on the wood holding the ceiling board.

The Resident District Commissioner Iganga, Eva Kwesiga, said efforts are underway consult the UPDF engineering department in Lugazi about the issue to ensure the issue is rectified.

Kwesiga said cracks had already developed on the outside ceiling board on the same building putting the lives of pupils and staff at a risk.

"The other ceiling board also developed cracks and I believe these ones are also life threatening," she said

The school headteacher, Joyce Babuleka, said 24 desks were destroyed after the ceiling board caved in.

Babuleka said she had earlier written a report about the huge cracks that had developed on the building to the UPDF engineering department and district officials.

Iganga Municipal Primary School, a government-aided school with a population of 1,587 pupils, was constructed way back in 1957.

Majority of the buildings at the school are old and need to be broken down and new ones built.

The District Education Officer Iganga, Baker Kasadha, said the district education committee is to soon convene a meeting seeking a solution to the matter.

The Second Deputy Prime Minister and Minister for East African Community Affairs,  Kirunda Kivenjinja, had three days back been hosted in the same hall to a reception after addressing a gathering at the same school during the handover of an ambulance to locals of Iganga by the district Woman Member of Parliament, Brenda Asinde.