Israel's Netanyahu in crucial talks as he ...
Next Story

More than 1,200 people were listed as missing from the Camp Fire

US President Donald Trump (2L) looks on with Paradise Mayor Jody Jones (R), Governor of California Jerry Brown (2R), and Lieutenant Governor of California, Gavin Newsom, as they view damage from wildfires in Paradise, California on November 17, 2018. - President Donald Trump arrived in California to meet with officials, victims and the "unbelievably brave" firefighters there, as more than 1,000 people remain listed as missing in the worst-ever wildfire to hit the US state. (Photo: AFP)

More than 1,200 people were listed as missing from the Camp Fire

President Donald Trump expressed sadness Saturday at the devastation caused by fires in a California town, but persisted in his controversial claim that forest mismanagement was responsible for the tragedy, which has killed 76 and left more than 1,200 listed as missing.

"This is very sad," Trump said after surveying the remains of Paradise, where nearly the only people out on the road were emergency services workers, surrounded by the twisted remains of a community incinerated by the flames.

"They're telling me this is not as bad as some areas; some areas are even beyond this, they're just charred," he added after looking at a street lined with melted cars, tree stumps and the foundations of wrecked houses.

The deadliest and most destructive wildfire in California's history, the so-called Camp Fire, has now claimed 76 lives after authorities on Saturday confirmed five more victims. 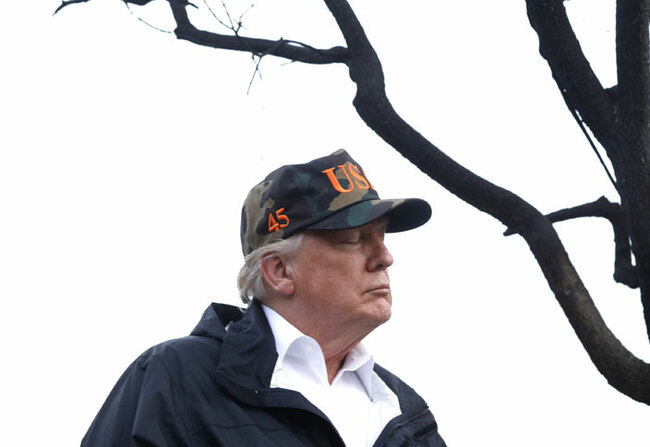 President Donald Trump spends a moment with his thoughts while touring damage from the Woolsey fire in Malibu on November 17, 2018. (Photo: AFP)

The blaze has devoured an area roughly the size of Chicago, destroying nearly 10,000 homes and more than 2,500 other buildings.

In Chico, near Paradise, Trump met with firefighters and other first responders at a makeshift headquarters.

Reviving an earlier controversy, Trump repeated his claim that California had mismanaged its forests and was largely to blame for the fires.

"I'm committed to make sure that we get all of this cleaned out and protected, (we've) got to take care of the forest, it's very important," Trump said in Paradise.

Days ago Trump threatened to cut federal funding to California over its alleged "gross mismanagement" of forests. 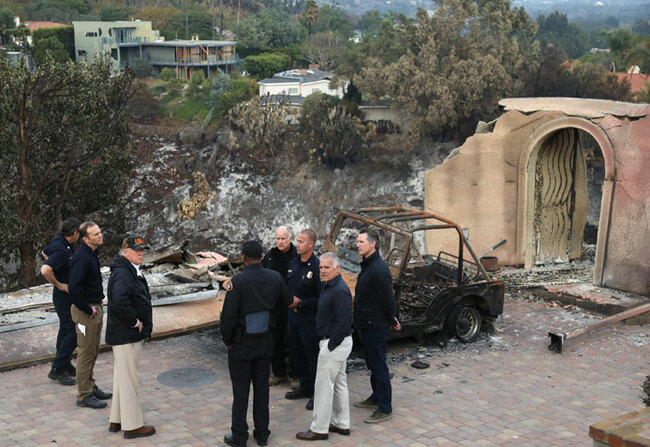 Asked if he believed climate change had played any role in the fires, Trump again pointed to the forest "management factor" and insisted that his "strong opinion" remained unchanged.

Trump has long been skeptical of man's role in global warming despite mounting scientific evidence that the burning of fossil fuels is heating the planet and leading to more extreme weather.


The inferno erupted November 8, laying waste to Paradise in the northern foothills of the Sierra Nevada mountains and sending thousands fleeing.

The Camp Fire and another huge blaze have created a serious smoke problem across vast areas of the country's largest state. When Trump stepped out of Air Force One at Beale Air Force Base north of capital city Sacramento, the sun struggled to cut through haze so dense it covered the base like a fog.

More than 1,200 people were listed as missing from the Camp Fire, according to a list issued Saturday by the Butte County Sheriff.

Sheriff Kory Honea has said there could be duplicate names and some people who had escaped could be unaware they were listed as unaccounted for.

More than 300 people recorded as missing have already been found.

The Republican president was accompanied on his visit by son-in-law Jared Kushner and chief of staff John Kelly. They were met on the tarmac by Governor Jerry Brown and Governor-elect Gavin Newsom, both of them Democrats in a state that leans strongly that way.

As they drove through the state, several signs thanked Trump for coming but one called him a "moron".

Roslyn Roberts, 73, who fled from her home in Paradise, said she voted for Trump but disagreed with his views about forest management.

"I would tell him that this fire has nothing to do with forest mismanagement. Thousands and thousands of homes got destroyed with no trees around," she said at a shelter set up by the American Red Cross in a church.

In Chico, volunteers had erected a tented encampment for evacuees.

Authorities said 47,200 people had been evacuated because of the fire and nearly 1,200 were living in shelters.

Much of the work is now focused on Paradise, where many retirees were unable to get out in time.

Rescuers with sniffer dogs have been conducting house-to-house searches.

Three other people have died in southern California in a blaze dubbed the Woolsey Fire, which engulfed parts of Malibu and destroyed the homes of several celebrities.

That inferno, about two thirds the size of the Camp Fire, was 84 percent contained Saturday as Trump surveyed the damage at well-to-do homes there.

California's tragedy touched the heart of Pope Francis in Rome, where on Sunday he sent out "a special prayer... to those affected by the fires that are ravaging California."