MENU
Busiika to host both motocross and rally
Previous Story

The Super Lady as she is popularly known has vowed to go for her third title next year by defending this year’s victory.

Muwonge receives the trophy from Paul Kakande, the Oryx marketing manager as her navigator Edmond Kyeyune looks on

The Super Lady as she is popularly known has vowed to go for her third title next year by defending this year’s victory.

National Rally Champion Suzan Muwonge is not retiring from the sport soon and hopes to defend the title next year.

The Super Lady as she is popularly known has vowed to go for her third title next year by defending this year's victory.

"I'm happy having it for the second time. I have to celebrate, but the celebration will not be long because we have to start planning how to defend our title," Muwonge told New Vision after receiving the Elgon Rally trophy from Oryx Marketing manager Paul Kakande.

She said whereas, the SBI Kabalega rally in Hoima where she finished second gave increased her chances of the NRC title, Elgon rally in Mbale sealed it all.

"I think the Hoima rally boosted my chances, but the break through to the title was this rally (Elgon Rally) because until the last section, I was still nervous that anything can happen and end our title hopes."

She appealed to the corporate companies to support her as motorsport requires a lot of money.

Rally drivers including Godfrey Lubega, Hassan Alwi and Christakis Fitidis congratulated her saying she deserved it. 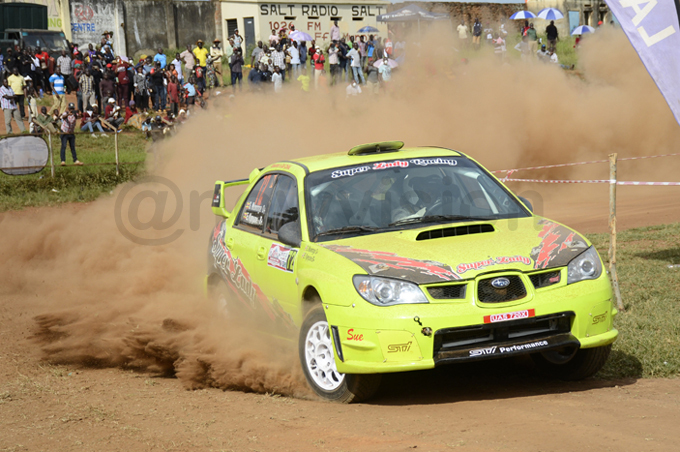 Muwonger powers her Subaru to victory

The organisers of the event Motorsport Africa Club (MOSAC) were lauded for organising an accident free event by sponsors Oryx.

"As sponsors we are happy with the organisation and we are convinced to continue sporting MOSAC," the sponsors said in a statement.