Musisi gets another global management award
Next Story

One drops out as Ayeni's entourage crosses River Nile

Walker Ayeni, the chief walker (left) with Gerald Muhumuza on the first day of the trek from Kampala to Kapchorwa. Photo by Gerald Tenywa

A team of four walkers in the 370kms trek from Kampala to Kapchorwa to create awareness about climate change has reduced to three.

This was after Gerald Muhumuza, the deputy headmaster at Bishop Cyprian Kihangire Senior Secondary School run out of gas on the second day of the trek.

Geoffrey Walker Ayeni who is the chief walker is leading two colleagues, Oco Dunstan, a student at Uganda Christian University and Julius Onyole, a pastor and civil engineer.

The trek is expected to cover most of the towns in eastern Uganda in 10 days. The trekkers were flagged off on Monday by Paul Mafabi, the director in charge of environment affairs in the Ministry of Water and Environment.

"We are strong and we have that passion, seeing people are very receptive, people," said Geoffrey Walker Ayeni who is the chief walker. "We have met cheerful people at Lugazi and Najjembe." 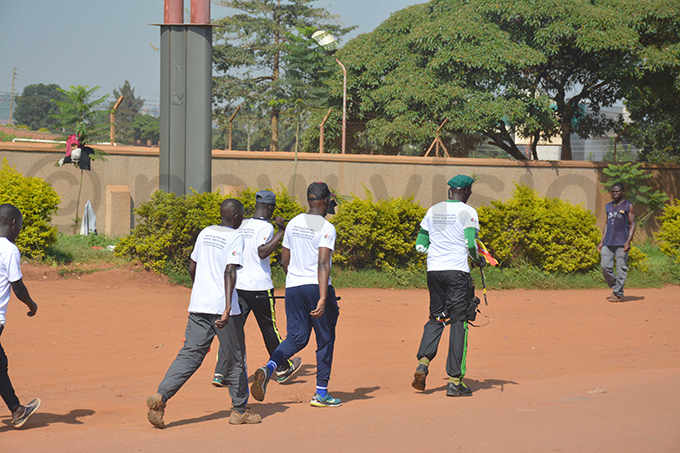 He added, "We planted trees at Coca-Cola at Namanve, Luganzi and Najjembe within Mabira. We hope to plant at the stop overs as we walk towards Kapchorwa."

Ayeni crossed the New Nile Bridge which is the longest bridge across the Nile on Wednesday. Ayeni crossed with two of his colleagues.

The walkers have been supported by Care International (Uganda) and the National Association of Professionals Environmentalists (NAPE).

The chief walker said they had planted trees at Nile Breweries on the western side of the Nile before crossing to the eastern banks of the Nile. He said they were going to plant trees at Bidco and Kakira before heading towards Iganga.

"We are introducing planting trees for protecting the environment and absorbing the fumes," said Ayeni, adding that tree planting needs to be scaled up.