It is better to climb the Great Wall with the one you love. It is one mega wall they had s road and steps on top of it, and spot avenues to see far.

It is better to climb the Great Wall with the one you love. It is one mega wall they had s road and steps on top of it, and spot avenues to see far.

The beautiful roads and trees all over Beijing. It's a beautiful experience. The people are amused and feel lucky to share stories with black people.

They look at you with interest and admiration. They always pull us to take photos with us and it kind of make us celebrities here. The weather is very cold. I was very amazed by the gardens and trees that surround the whole town. It is a very great place. They cover the grass and trees to protect it from snow. China is more famous among Chinese people themselves. All tourists sites we visited had almost 80% population from China itself. The young and old ones visit their own sites. They love each other and their country. I never saw any litter on the road. No single time I saw lots of traffic on the road, despite lots of people.

People know what to do and when to do it. It's that simple. The bird nest is the Olympic Stadium built by Chinese government during the 2008 Olympics. We went through the get up to a very beautiful garden with yellow leaves on trees. 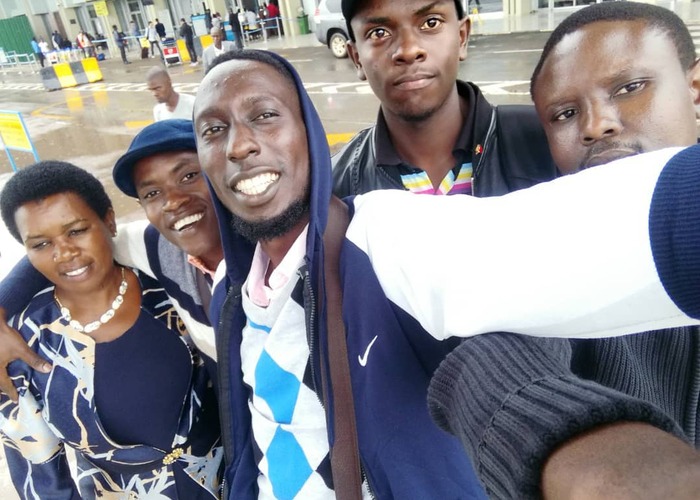 The birds nest is visited by more than a million tourist a year, ever since the Olympics games that were the biggest in history of Olympics.

Chinese believe in art; they have great statues that surround the stadium.

But one of them is the one of 3 girls carrying flame of fire or call it the Olympic torch.
Lots of money was really spent, and I can witness this a maxing building in a format of a bird's nest.

The great wall
It is better to climb the Great Wall with the one you love. It is one mega wall they had s road and steps on top of it, and spot avenues to see far. I wonder how they built such a wonderful thing. The Chinese love for the country is much reflected in this 4th wonder of the world.

It covers an endless surface on top of mountains.

Climbing it is very very hard.... It's like climbing two Crested Towers buildings using stairs. Very hectic, it takes determination to climb up to the top. "You are not man enough if you've never climbed the Great Wall"

Perhaps it's better you climb it with the one you love, you may last forever and you may always remember the tough times of climbing this wall. However, not so many people make it to the top...the stairs are too slippery and you can easily miss a step. Lots of people visit this wall every day.

It's history ranges back from Ming dynasty and emperor who was building a protective measure for his power.

The summer palace
Emperors were great people in China. The 2000 hectares of land was a gift to his mother with a lake, theatres and boats in it. This was my favorite place. I love mothers... I loved the fact that the summer palace in China was given to a woman who was the mother of the emperor.

It has pine trees that have been around for 150 years as sign of long life wishes to his mother. It has a hill with one big stone that is called a stone for longevity. The summer palace has the longest corridor in the whole world. The corridor was named in the 2006 Genesis book of records.

It has more than one million paintings as good memories for his mother.
We found lots of old people celebrating long life at this place. Most young generations bring their mothers to this place to celebrate their mothers' lives. The corridor passes through big compounds and was roofed well to make sure his mother was not affected by the sun.

We were told that the summer palace also has appeared in more than 5 big movies.
Walking into Beijing you'll immediately feel you are in a grand time -honored city of art roads, buildings and decorated design of trees, which makes the city be more colourful.

Beijing is a tourist city, cultural events, heritage cultural creativity, beliefs and all those historical traces attract many tourists both nationals and foreigners, which has uplifted the tourism industry in terms of revenue collection.

Uganda has many cultural events and creativity only needs to promote it and attracts tourists.