Former MP passes on
Next Story

Survivors of the 2010 Bududa landslide, who were relocated to Kiryodongo district, are being threatened with eviction.

This was revealed by Julius Weleka, the area LCI chairman, during a visit to the area by disaster preparedness state minister Musa Ecweru on recently.

Eweru was visiting the area to confirm whether claims by leaders of Bududa that the victims returned to Bududa were true.

"This is worrying most of the people because they have no other place to go if they are evicted. Their homes were destroyed by the land slides. Where else do they expect them to go," he said.

He requested Ecweru to ensure that he processes for the documents that show that the land on which they were resettled belongs to theM. 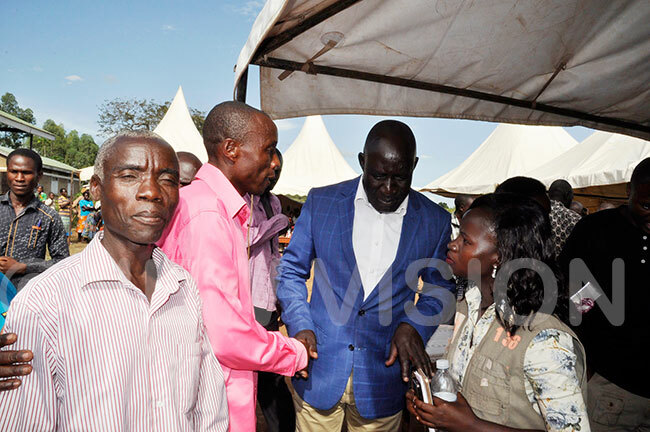 "Such a document can act as security, especially in the current times where land evictions are rampant. We should be given temporary documents as we wait for the land tittles that Government promised us," he stressed.

Some residents said the two-and-half acres allocated to each member has block numbers - meaning the land is already demarcated, making the processing of titles easy.

Edith Aliguma, vice chairperson Kiryandongo district said that its true there is a cultural organisation that claim land in Bunyoro belongs to their ancestors and part of it was grabbed during the British.

She noted that this group should not cause fear among the people because it is baseless. On people getting temporally letters, Aliguma said they are very important especially for the people of Bududa.

Linos Ngompek, the outgoing Kiryandongo Resident District Commissioner, confirmed that there is a group called Bunyoro kitara reparations agency (bukitarepa) threatening people over the radios that all land in Bunyoro belongs to Banyoro and that they will chase all foreigners.

However, Ngompek noted that Government is aware of this group and they are ready to deal with them.

"These are people who have no right over government land, so people should not get worried because the land was allocated to them by government so no one has powers to chase them," he said.

In his response Ecweru, assured the people that no one will evict them from the land because it is Government land and it is the Government that allocated the land to them.

He said the delay in giving out of land titles was because they did not want what happened in Kibaale to happen in Kiryandongo.

He revealed that when the people of Kibaale were resettled and given land titles, the rich people came and bought the land from them.

However, he said that his office will write letters of allocation as soon as possible so that each one has an ownership letter

On claims that people had abandoned the area and went back to Bududa, the residents whom the minister visited noted that the rumour brought about by the leaders from Bugisu region are false because on top of the 603 residents who were resettled, more 300 people have joined them from Bududa.

The residents noted that those airing out false accusations have their own political agenda which is best known to themselves.

"I am surprised that people sit in their homes and offices and claim that there are no people here. My call is for them to take a visit to this place to prove for themselves," Ecweru said.

He assured the people that government will continue to support them and ensure that they work on most of the promises they made during the resettlement time.

Moving around the community, you find various crops such as bananas, maize, cassava, among others which is a picture of good life in the settlement camp.

However, residents said that because of the impassable roads in the community, they face challenges with selling their produce.

At Panyadoli hills primary school, the only government aided school; pupils have no breathing spaces in the classrooms. Some classes have more than 120 pupils in the room. The school has an enrollment of 1600 pupils (800 girls and 800 boys) but has only 29 teachers. Out of the 29 teachers, only 10 are on government pay roll.

The school was built by government of Uganda under the office of the prime minister for the people of Bududa who were resettled in the area after they were affected by the 2010 landslides.

At least 100 people were believed to have died, and 94 bodies were found.

Rev. Edward Kiirya, the Kiryandongo District Education Officer said the population is ever increasing hence straining services such as schools. He noted that the only primary school is filled to capacity calling for more schools.

"After completing primary level, most pupils drop out because the nearby secondary school is eight kilometers. Many can't afford to move this distance. He also noted that the community does not have a nursery school, so pupils bellow six years are left out," Kiirya notes.

Dr. Godfrey Kisembo, from Kiryandongo hospital, who representative of the district health officer, said that the long journeys especially for expectant mothers is risky. "Many can't walk distances. Even the roads are impassable meaning the ambulances can't reach the patients," he notes.

David Wasikye, the Chief Administrative Officer Kiryandongo District said it's true the roads are in a sorry state but the district has secured some funds and the main road leading to the Bududa land has been planned for and it will be worked on in this financial of 2018/2019.