Uganda to vaccinate health workers against...
Next Story

Prior to his death, Kirangwa was in retirement at the Brothers’ headquarters in Kisubi.

Prior to his death, Kirangwa was in retirement at the Brothers’ headquarters in Kisubi.

Tributes have been paid to Rev Bro Vincent Anthony Kirangwa, a senior member of the Catholic institute of the Brothers of Christian Instruction, who died on Monday (October 29) at the age of 86.

Prior to his death, Kirangwa was in retirement at the Brothers' headquarters in Kisubi.

He was buried at the Brothers' cemetery at Mount Saint Theresa, Kisubi on Wednesday (October 31). 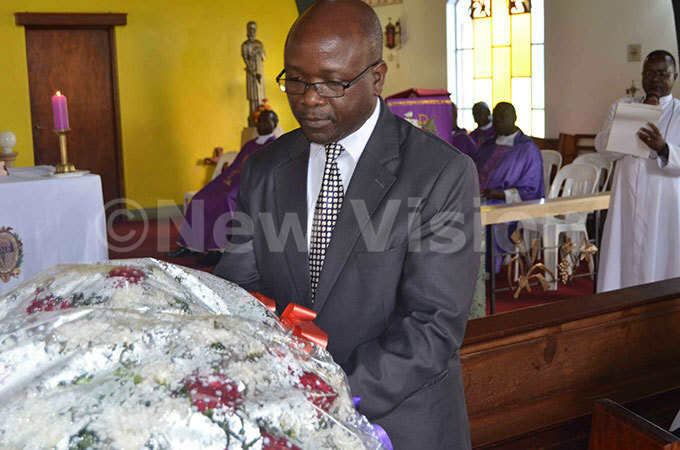 Justice Stephen Mubiru places a wreath on the casket bearing the remains of Bro Kirangwa during the funeral service at Mount St Theresa Chapel, Kisubi on Wednesday. Photo by Mathias Mazinga

Kirangwa's funeral mass was presided over by the Vicar General of the Metropolitan Archdiocese of Kampala, Msgr Charles Kasibante, who spoke highly of the elderly Brother's religious commitment and love for children.

"Bro Kirangwa walked the way of perfect charity. He served the community with utmost commitment, for sixty years.

He had special love for children.He taught them in class and also instructed them at the pitch. He played with them games like tennis and volley ball. He was a true Brother of Christian Instruction who always aimed at developing all the faculties of the children he taught."

The Provincial Superior of the Brothers of Christian Instruction, the Very Rev Bro Peter Kazzekulya spoke highly of Kirangwa's hospitality. 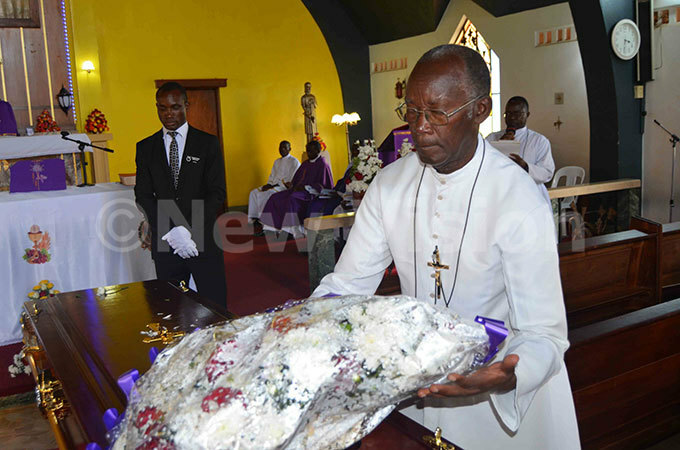 Bro Peter Kazzekulya places a wreath on the casket bearing the remains of Bro Kirangwa during the funeral service at Mount St Theresa Chapel, Kisubi on Wednesday.Photo by Mathias Mazinga

"He never minded about your tribe. He would just welcome you with open hands and even take you to the very place or person that you wanted to see. His love for children was extra-ordinary. Even in his retirement, he wanted to be with children. That is why we started for him a nursery school at our premises at Kanywa."

"He was a seasoned teacher and disciplinarian. He was strict but very friendly. He always employed interesting methods that made love us love English. He was also a gifted coach, who developed our sportsmanship in games like basketball and tennis."

Joseph Bwanika, a nephew, amused mourners when he reported that Bro Kirangwa loved the institute of the Brothers more than his family, which was why he spent all the time with the Brothers and never found time to go to the village to see his relatives. 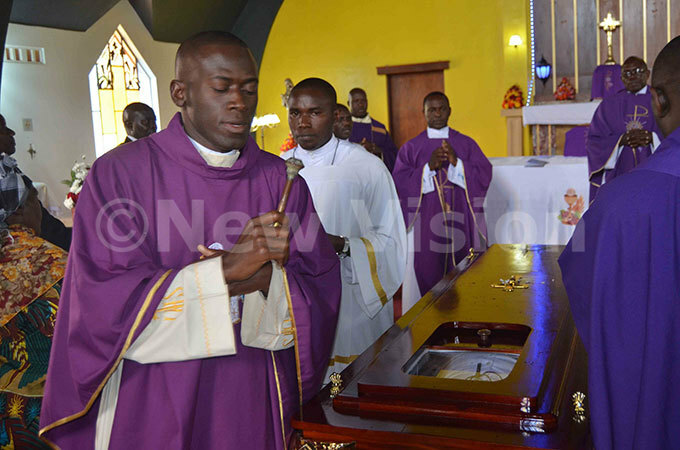 A priest performs a funeral rite during Bro Kirangwa's funeral mass at Kisubi on Wednesday.Photo by Mathias Mazinga

He joined the Brothers Novitiate at Kisubi in 1958. Before taking up his Christian education career, he trained as a Grade 3 and Grade 5 teacher at Mount St Theresa TTC (1961) and Kyambogo NTC (1968), respectively.