Uganda is enjoying a quiet revolution in girls’ lacrosse that has strongly focused on grassroot development, grooming talent in schools.

Uganda is enjoying a quiet revolution in girls’ lacrosse that has strongly focused on grassroot development, grooming talent in schools.

The U19 Women's World Championships next year in Canada is expected to be a grand advert for girls' lacrosse not just in Uganda, but the entire continent.

Uganda is enjoying a quiet revolution in girls' lacrosse that has strongly focused on grassroot development, grooming talent in schools.

A case study on schools shows how the project over the years has unlocked huge potential even in virgin areas that had no knowledge about the game.

There are different accounts of how total strangers turned into enthusiasts of the game.

"I got intrigued after watching teen wolf, television drama that has elements of the game. When I found the game at school, I joined right away" said Gaylene Gaswaga , a captain from Mt St Mary's College Namagunga. 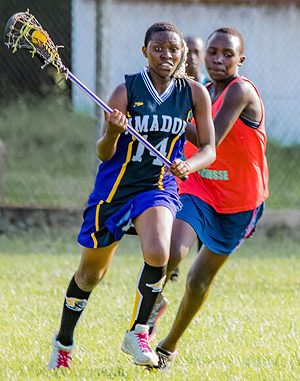 From Schools in particular, a national U19 squad has been crafted and in no time, they are expected to light up Canada next year. But are the Ugandan girls cut out for this high level of the game?

"There has been a deliberate plan to improve on their abilities. The recently concluded U19 invitational in Uganda was valuable exposure. We hope for the best going forward" said Liberty Twesiime.

Twesiime who has since become a regional coordinator believes the game is scaling genuine heights in the region.

Conversely, the federation which had recently experienced internal shortcomings finally has a leg to stand on after their main sponsor Uganda Lacrosse Foundation, an NGO based in the United States decided to come back on board.

"We call out all well-wishers, corporate bodies and friends of the game to support our cause as we seek to have the girls in Canada. There is nonetheless relief after the ULF came back" Twesiime adds.

Meanwhile, going by results from the invitational tournament last weekend, the Uganda U19 girls look polished and ready to storm Canada.

With the countdown to next year's championship gathering speed, the Uganda has already scored big by securing a place. How they perform may just be another concern for another day.

Umeme to cut power losses to 23%

We are not the problem - Umeme