TOP Environment STORY
3 years ago .
In pictures: Morning rain batters Kampala
From a man desperately trying to keep dry here to another with a makeshift raincoat there. Scenes during and after an early morning downpour in the city.

Sometimes, when Mother Nature decides to deliver a punch, she does so with such force that it and whips and knocks out everything lying in its path. Here in Kampala, we may not face the fury of such natural forces as Hurricane Michael or Florence, but it is safe to say that whenever it rains in Kampala, it sure does pour.

In several parts of Uganda's capital, Wednesday morning illustrated just how much disruption a downpour can cause. Stranding, traffic jam and late reporting to work places are common.

Somewhere in the city, it was pandemonium as traders endured a free early shower as they scrambled to shield their items from getting soaked. Others, like this one pictured in a white T-shirt and jeans clasping a yellow bag, sprinted to take shelter as the skies gave way. 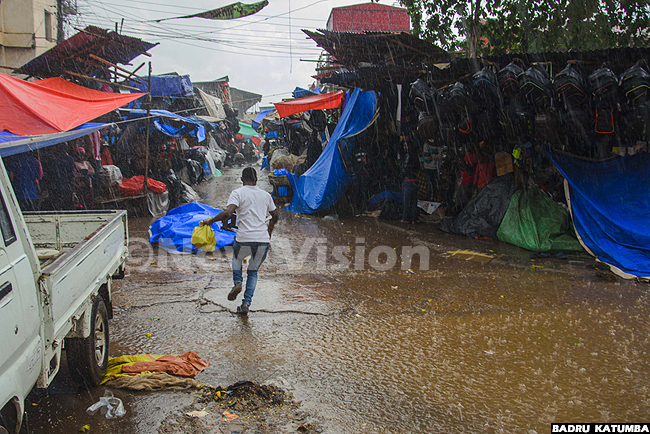 As the roads and streets took a ruthless beating, some people remained resolute. Instead of taking cover, this gomesi-clad woman, for instance, defiantly went on about her transit, with her azure blue umbrella keeping her from getting fully soaked. 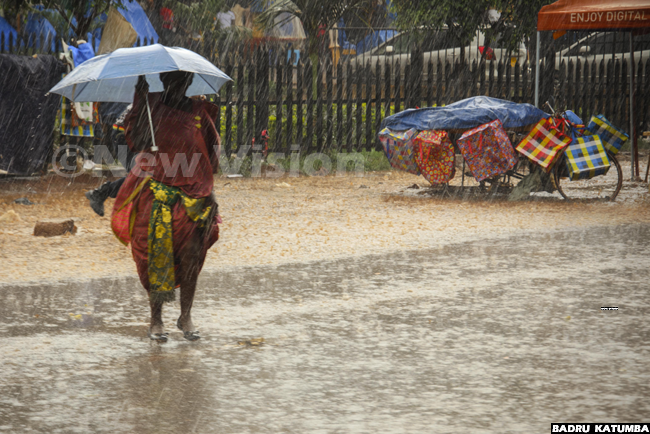 Nearby, this open-street shoe trader, who ironically was barefoot, appeared to have been caught offguard by the rain. You could say he did a poor job with the tarpaulin, which clumsily hugged the rail on which his goods hang.

Much as he tried to, he could do little to save his workstation from getting floodied. 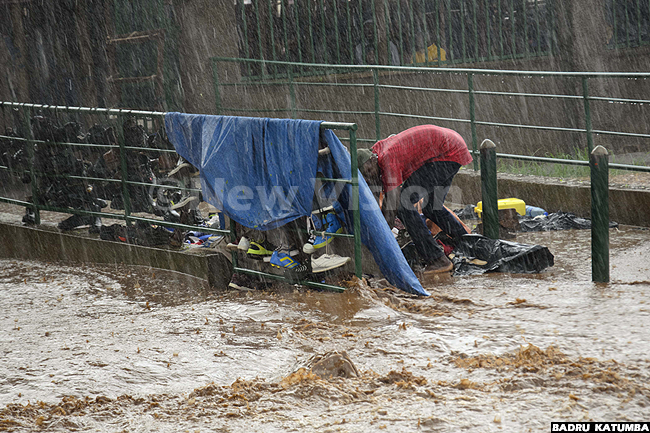 Clearly, desperate times call for desperate measures. Who knows this better than this pair on a bodaboda?

It appears that while the rider, looking determined and focused, seemed keen to keep his shoes from getting a dip, his client was more concerned about getting to her destination - whatever it took. Wearing a look of helplessness, she let her feet drown in the flood waters as she tightened her grip on the items that undoubtedly mattered the most. 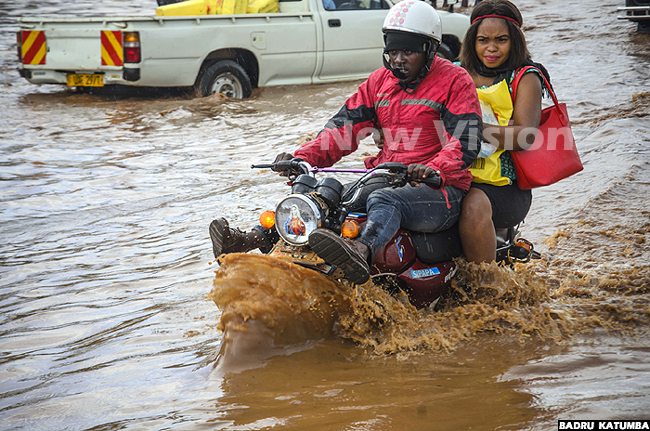 Not far away, there was another picture of desperation as this young man, elevated a few feet, clamped his left hand around his minder, who waded through the knee-deep dirty waters to make a buck.

You will agree that it requires a great deal of balance and strength to pull this one off. 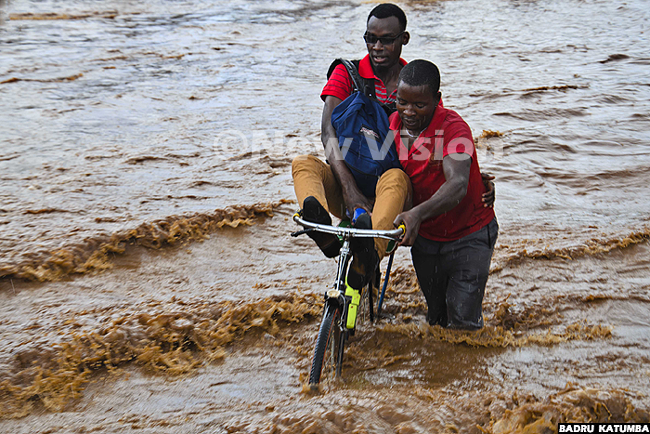 As the rain eased off a bit, some pedestrians worked out ingenious ways to keep dry. While some chose the straightforward option of an umbrella, one made use of a black polythene bag as a headgear and another transformed a large polythene bag into a makeshift rain coat. 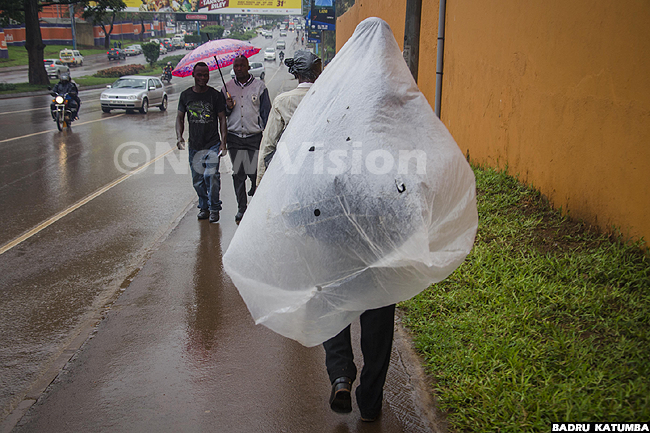 It was all about creativity.

Even the great Bob Marley, who was as popular for his reggae as he was for his distinct hairstyle (dreadlocks), would be proud of this inventive way of dealing with the rain. 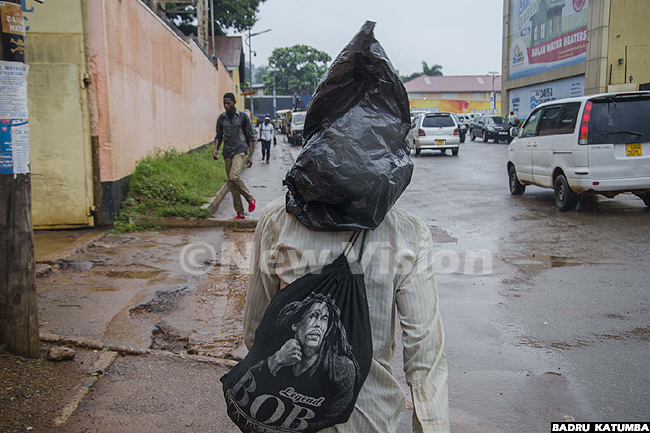 Rain usually disrupts Kampala traffic. But on this particular morning, some roads looked forlorn. As car after car sped off on this wet road, these two would-be travellers waited on the sidelines with their drench poultry, apparently set for a long journey. 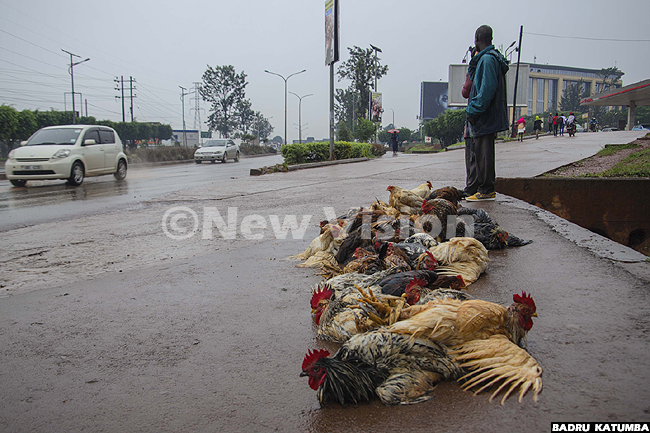 It was back to business as usual as soon as the rain took a hike. This vendor returned on the road with a cartful of cabbages under an overcast grey sky. 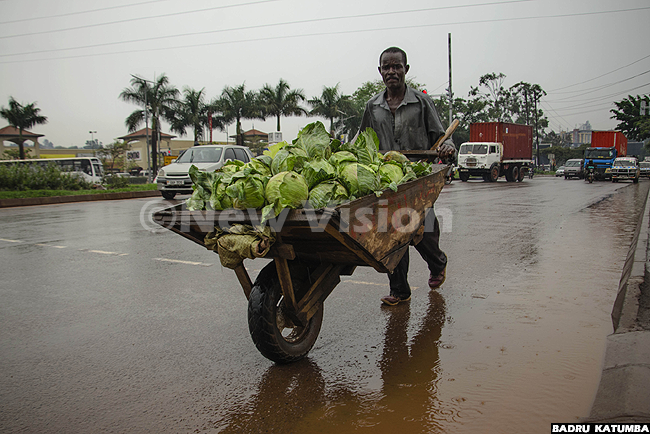 The local tea lady a few hundred feet away from the road was also back to what she does best as the inviting aroma of her richly-spiced tea wafted teasingly to the noses of patrons and passersby.

A cup of the hot stuff. Anyone? 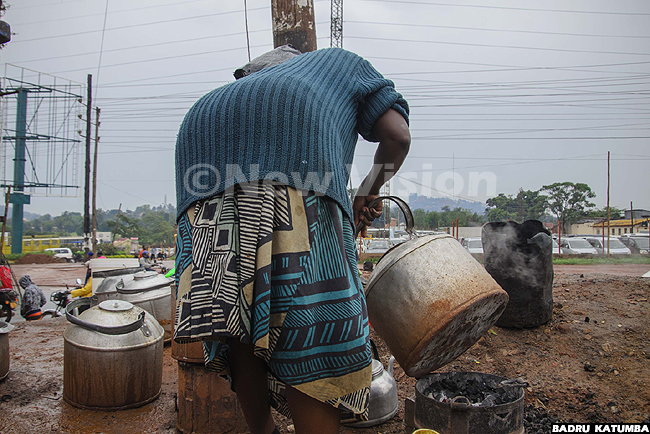