Trucks, workers in helmets and occasional groups of officials touring the expansion works dot the area.

During a recent visit by a team from the works ministry, Civil Aviation Authority (CAA) officials said the works were on track.

Fred Bamwesigye, the CAA deputy managing director, said since the start of the expansion work in early 2016, focus had been on building a new cargo center, an aircraft parking apron and access roads. 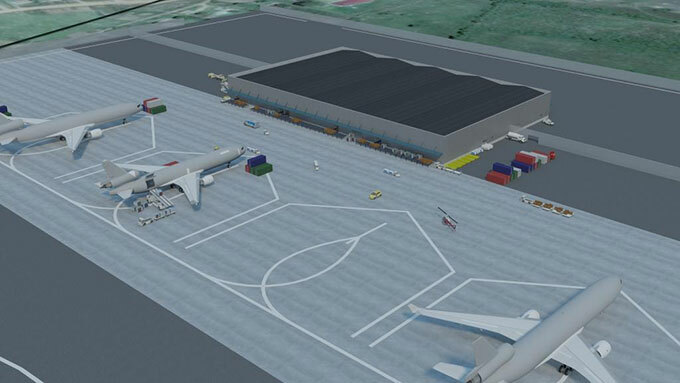 An artistic impression of the new cargo centre

Bamwesigye said one of the taxiways code, Alpha, was 75% complete and the rehabilitation of the second alternative runway was 35% complete.

He said the two projects are expected to be completed in 2021.

"The cargo center is expected to be completed early next year.

On completion of the center and its associated works, such as access roads and cargo aircraft parking apron, operations are expected to be relocated from the old cargo center to the new one," Bamwesigye said.

Vianney Luggya, the CAA manager of public affairs, said after relocation of cargo operations, works on a new terminal building connecting to the one are expected to commence.

He said the work will be undertaken by the same contractor — China Communications Construction Company, which also constructed the Entebbe Express Highway.

"The rehabilitation of the old runway is expected to end in February 2019, expansion of aircraft parking apron 1 in June 2019 and extension of taxiway Alpha ends early next year," he stated.

The interior of the new terminal building on completion in 2021

Luggya added: "While Entebbe handled 1.62 million international passengers in 2017, the capacity for the terminal building is not more than two million passengers a year, yet statistics show that the figures are steadily growing every year."

He noted that at the end of the first phase of the work in 2021, Entebbe should have capacity to handle at least 3.5 million passengers a year.

Under this project, Luggya said, a computerised maintenance management system and operational database system will be established.

The spring of entrepreneurs is coming