36-year-old trains youth to create own jobs
Next Story

Venturing into soap making to wash off poverty

"I started making liquid soap from my double-room house."

"I started making liquid soap from my double-room house."

(All photos by Jovita Mirembe)

Joseph Ntambala, 23, had to drop out of school after her provider could no longer help him. So he decided to break out of his comfort zone. Down the road, thanks to determination, he set up a soap-making business after a year-long training. His is a topsy-turvy affair. He shares his story.


During my school  days, my grandmother, who was a farmer, grew avocado, maize, cassava and sweet potatoes, part of which she sold to pay for my school fees.

Along the way, however, she became feeble due to old age and could not manage the laborious farm work. Without her financial support, I had to drop out of school after sitting my O'Level final exams.

I decided to think outside the box: Look for work and put myself in a position to finance my further studies.

One day in March 2015, while in a pensive mood at home, I heard information off a public address system mounted on a car moving around our village. Mentor Coach Empower Uganda was calling on youths  to attend trainings that would give them  entrepreneurship skills to enable them become self-employed.

The social enterprise empowers young people to thrive and drive economic development by equipping them with the skills and opportunities to stay in school, find and keep a job, start and grow a business or get involved in their communities. 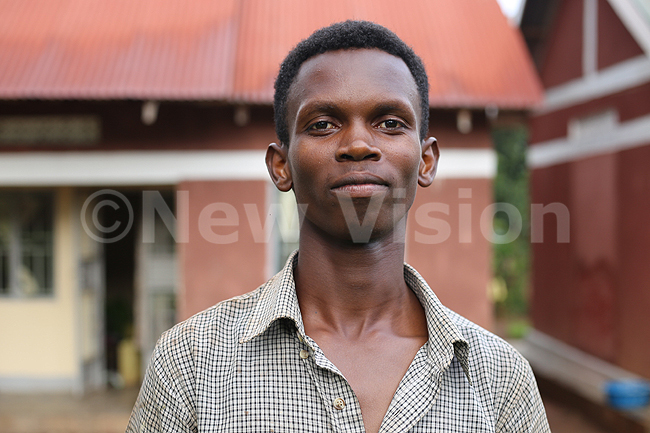 Ntambala had to drop out of school after O'level

I registered for the trainings and one month later, I received a call. I was among the selected youths to attend the one-year training in entrepreneurship skills at Nama Wellness Community Centre.

Part of our year-long training included financial literacy, starting a business with a small amount of money and making chalk and liquid soap. I grasped the soap making technique in only two weeks, which motivated me to start my own business. But I did not have money for that.

In May 2015, I met Ronald Lwere, my classmate from secondary school. He was working at Biyinzika Poultry Farm in Naalya, central Uganda as a casual labourer, from which he earned sh12,000 per day.

To me, this was a good deal and so I decided to join him because I desperately needed money. But two weeks later, I quit: it was a hectic job. Also, the manager did not treat us well and we worked long hours.

Since I had learnt how to make liquid soap, I used the shs144,000 I had saved to buy the materials I needeD, including buckets, lather-making chemical, sulphiric acid, perfume, universal colour and urea.

I started making liquid soap from my double-room house, which was a boys' quarter at my grandmother's home in Lutengo village in Mukono. 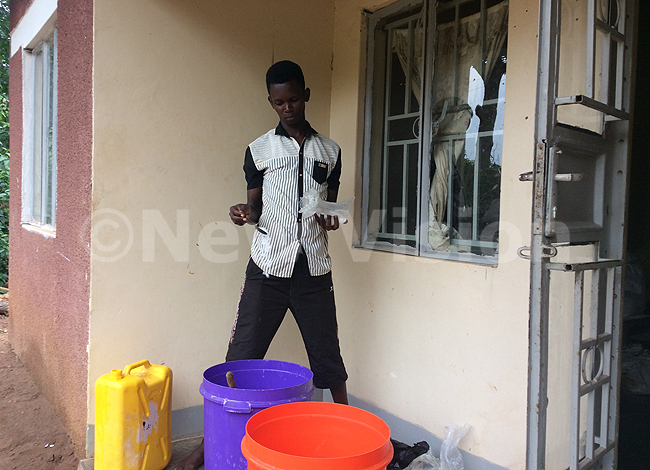 Ntambala does all his work from home 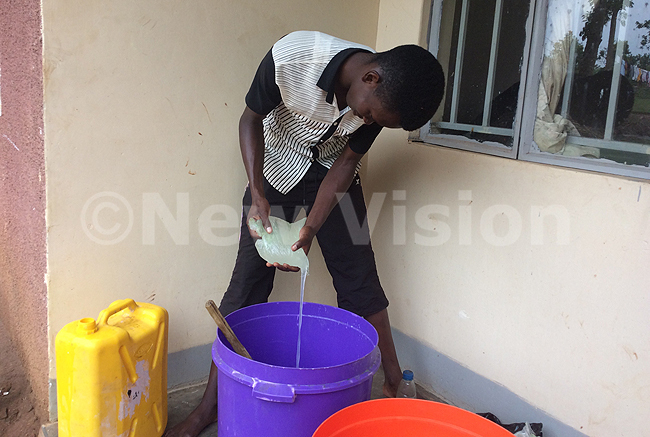 For the soap, he does the mixing from his verandah 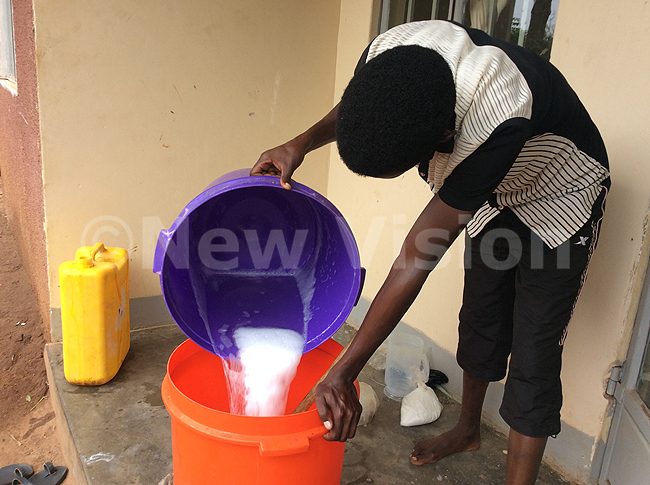 I produced 40 litres of liquid soap on the first attempt, and packaged the soap in 80 half-litre water plastic bottles, which I used to collect from functions such as weddings and graduations. I sold each bottle at sh1,000 to residents in and around my home village in Lutengo.

I sold from five to eight bottles every day by door-to-door hawking. It took me almost a month to sell off all the soap.

Along the way, I increased production and soon, I bought a savings box as business started picking up. Two schools and several individuals got interested. Demand for liquid soap was high and fortunately, I was the only one in my village selling it.

In January 2016, I went to Mpoma Royal College to look for market for my soap    and luckily enough, the administration appreciated and bought five 20-litre jerrycans at 35,000 each.

I also entered a deal to supply the school with liquid soap every month.

With my soap business thriving, an idea popped up in my mind: to start a pig project. From a mini survey, I discovered that pork had some good market, so I started off with the sh352000 profit I had made.

I bought five piglets and maize brand  to begin with. From the money I made producing liquid soap, I bought two male pigs, which I sold six months down the road.

In  August 2016, I started producing chalk because of two reasons. One, my main market for liquid soap was schools, and so I thought that if I also supplied chalk to them, it would boost my income.

Two, the liquid soap market was being invaded by other producers, hence  lowering my sales.

Therefore, to diversity my business, I bought a chalk moulding machine, chalk powder, boxes and chalk colour.  But the chalk I produced did not have the sort of market I had envisaged it would have, perhaps partly because of quality and it was not well labeled.

I later used a loan to upgrade the chalk quality and branding. 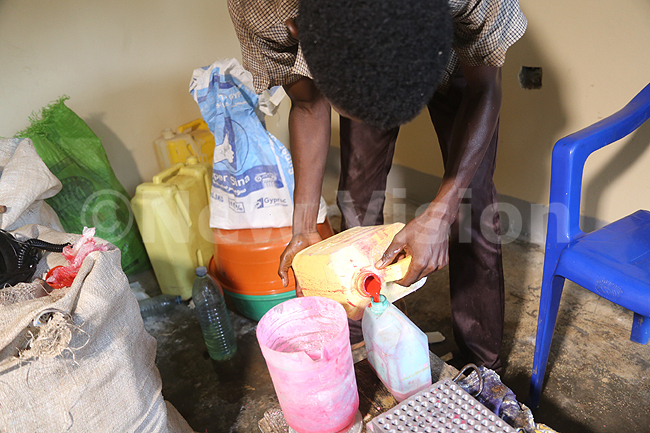 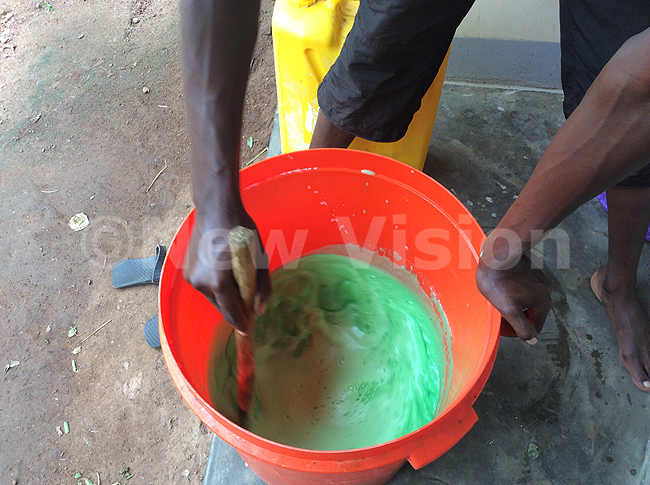 This was after the liquid soap business attracted stiff competition 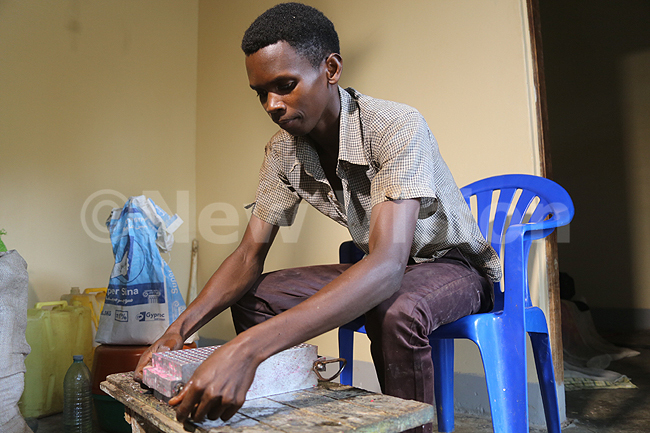 To make chalk, he had to buy a moulding machine 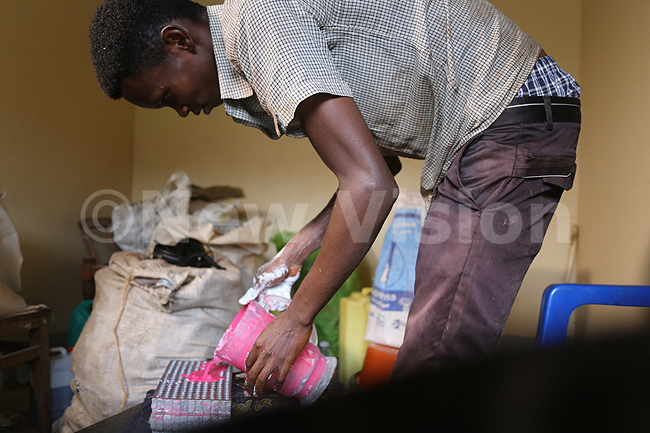 And so with the right skills, he was able to get down to it 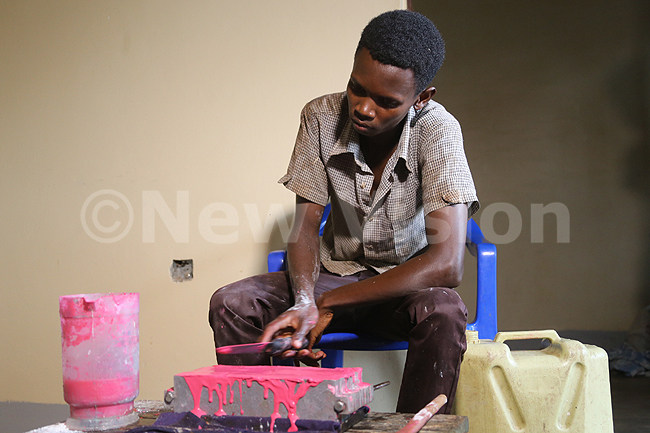 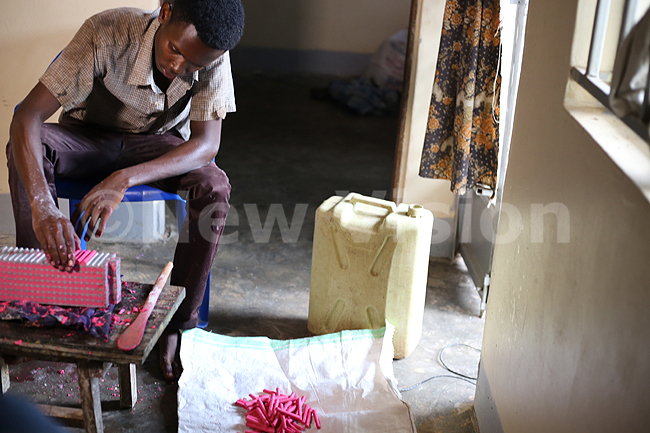 Ntambala is providing chalk to schools in Mukono district

Currently, I supply seven schools with 10 20-litre jerrycans of liquid soap every term in addition to other occasional orders. I also supply to individuals. I also supply two cartons of chalk to two schools.

I pay my employees according to the sales they make. I deduct 10% from the total sum to buy chemicals and the balance, after paying salaries, is saved.

I market my products by giving out free samples and then contact them later for feedback.

I ensure that I produce the best liquid soap - thick enough to compete with other brands on the  market and deliver it on time.

From this business, I can take care of my personal needs. I also bought a milk cow  at sh1.3m, which I am rearing at home.

Mpoma Royal College invites me to train students in liquid soap making at a fee.

In April 2017, I enrolled for a certificate course in motor vehicle engineering at Mukono Institute of Vocational Studies.

> There is stiff competition among liquid soap and chalk producers.

> Some customers undermine the quality of our products.

> There are fake chemicals on the market, which compromises the quality of the soap and chalk.

> Some clients delay to pay.

> The chalk moulding machine I have right now makes only 200 sticks of chalk at once yet one carton has 8,000.

To begin with, I am planning to employ more youths in the business.

Although my company name was registered by Uganda Registration Services Bureau, I was advised to go to Uganda Revenue Authority get a TIN number so that I can get a registration certificate.

I hope to get an independent working place for my business because right now I am working from home.