Chemical, Biological, Radiological, Nuclear and Explosive (CBRNE) materials are inseparable in many economic activities and are vital in everyday life.

They have a wide range of benefits to the society, predominantly in agriculture (fertilisers), industry (industrial chemicals for manufacturing) and the health sectors (diagnosis and treatment of diseases).

However, despite the vast benefits, CBRNE materials if misused or one does not follow the best practice as stipulated from production, transportation, use and disposal, they can cause high risk to the safety and health of the citizens.

It is according to this background that the Government of Uganda through the Ministry of Gender, Labour and Social Development (MGLSD) has embarked on implementing the Chemical Safety and Security Project (CHESASE), which is aimed at strengthening institutional technical and operational capabilities in (CBRNE) safety and security measures at workplaces. 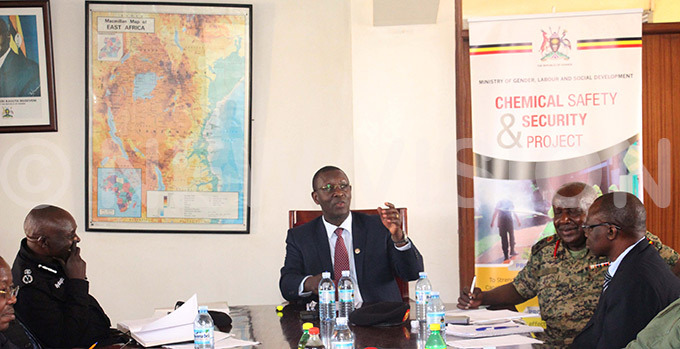 Bigirimana was addressing journalist on the status of the chemical safety and security programme, at the ministry head office in Kampala on Tuesday.

Bigirimana said, the effects of the CBRNE incident are multidimensional in nature and impact the development of the country negatively.

"They require multi-sectoral approach. Therefore, Ministry of gender, Ministry of Defence and veteran Affairs, Ministry of Internal Affairs, Uganda Revenue Authority and Ministry of Finance are at the forefront of the implementation of this programme," he noted.

On the progress of the project, Bigirimana revealed that so far they have purchased an aerosal monitor, and equipment that measures aerosol contaminants such as dust, smoke, fumes, mists and indoor air quality.

He added that they have purchased Personal Protective Equipment (PPE) to help inspectors in carrying out inspections in chemical related industries and also carry out inspections and field visits in the country.

He also said that the project has carried out sensitisation drives on safe handling of chemicals at workplaces adding: "Some employers and employees from central and western Uganda have been trained and sensitised".

Bigirimana noted that a total 50 occupational safety and health (OSH) inspectors have been trained on pesticide handling.

"This training was aimed at imparting skills for investigation for chemical related accidents and incidents in the agricultural sector and also to provide knowledge on the different types of chemicals used in agriculture," he added.

He also revealed that the Project has purchased office equipment to run the day today activities and two vehicles have so been purchased to facilitate the project activities.

He noted that while oil, nuclear energy and chemicals have produced many products that have been beneficial, they pose a high risk to human life, public health and the environment if not managed appropriately.

"A number of catastrophic CBRN incidents have happened around the world, hence it's the right time for Uganda to heighten her preparedness," he noted.

Skilling vulnerable women out of poverty