Involve students in planning to avoid stri...
Next Story

The unmet need for modern contraception is preventing hundreds of millions of women from choosing smaller families according to the 2018 State of the World Population Report.

The report released by the United Nations Population Fund (UNFPA) titled "The Power of Choice: Reproductive Rights and the Demographic Transition." Indicate that family size is closely linked with reproductive rights, which, in turn, are tied to many other rights, including the right to adequate health, education, and jobs.

According to the report that was released last week on Wednesday, when people lack choice, it can have a long-term impact on fertility rates, often making them higher or lower than what most people desire.

"Where people can exercise their rights, they tend to thrive. Where these rights are stifled, people often fail to achieve their full potential, impeding economic and social progress, according to the new report, entitled," reads the report.

This is not different from Uganda where 28% of Ugandan women have an unmet need for family planning services. Because of this unmet family planning need, Ugandan's are having more children than they want.

According to the 2011 Uganda Demographic and Health Survey (DHS), more than four in 10 births are unplanned.

Figures from Uganda Bureau of Statistics (UBOS) show that Ugandan women, on average, give birth to nearly two children more than they want (5.4 vs. 4.2).

Currently in Uganda fertility in the last five years has fallen from 6.2 to 5.4 children average per woman. But it is still one of the highest in the world. 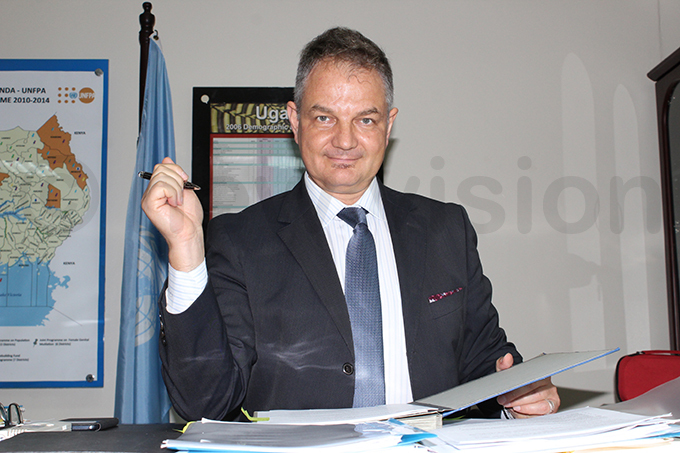 Speaking to New Vision, Alain Sibenaler, the Country Representatives of UNFPA said this can be reversed if family planning services are made available and women empowered to make to make choices.

He says reduction of fertility happens globally, including in Uganda because women desire to have fewer children.

"In Uganda there is a very clear indication that there is an unmet need to family planning methods. That means people would want to have contraception but they don't have access to it and thus end up with more children than they wanted," Sibenaler says.

"At the core of the demographic transition every country has to reduce fertility. Look how fast Uganda has increased its per capita GDP. For a country that has reduced its fertility at a slower pace from 6.2 to 5.4 it is remarkable that it has increased its GDP so fast and strongly," Sibenaler says.

He explains that there is need empower a woman and a family to make a choice, if and when and how many children they should have by making family planning services accessible by all.

Sbenaler says in Uganda, the distribution system is not at its highest level of efficiency. The family planning commodities are often not part of the PHC package of essential drugs which leads to stock outs. It is not always available.

"A young couple, young girl or married couple goes to the health facility and ask for family planning they don't get it because it is not available. That is a major obstacle," He says.

It is still difficult in Uganda to access family planning commodities at any moment anywhere or at any price, preferably for free.

However he commended government for a number of efforts put in place to address the unmet need and putting mechanism for information sharing.

This year in May, the National Sexuality Education Framework was launched, which describes on how schools should teach sexuality.

"It starts at school; if every girl knows what is happening to her body as she is young, as she goes into puberty and out of puberty, that is perfect," Sibenaler says.

Sensitizing and awareness raising and supporting girls stay in school and finish school.

"Family planning is a voluntary aspect that is a right that women have to decide on their own if and when to get pregnant. A lot of awareness rising around choice is needed. Many women don't have that choice. A lot of teenage girls fall pregnant because either they don't know or they don't have access to family planning," he says.

Once a lady is pregnant at a young age thier future is pretty much compromised because it is difficult to go back to school once they have one or two children.

Uganda is on good course because the contraceptive rate is improving and it has sexuality framework to foster and government has committed its own resources to procure family planning commodities.

"It is important to keep repeating the message that the demographic transition that may lead to or not to dividend is that you have a young population that is health and educated so that it can reduce dependency ratio," he says.

Religious leaders are also promoting family planning through traditional means, abstinence, and management of menstrual cycle among others which gives a woman more choices.

By improving the number of health structures in hard-to-reach places, the Government of Uganda strives to expand its reach and provision of services and method mix, including long acting, reversible, and permanent methods.

These commitments will contribute to the nation's ambitious goal to reduce unmet need for family planning to 10% and increase the modern contraceptive prevalence rate to 50% by 2020.

The Government is to scale-up access to family planning services up to at least 50% by 2020 as one way of improving the quality of the Ugandan population and reducing unwanted pregnancies.

Some of the birth control methods include use of condoms, diaphragm, contraceptive pills, implants, IUDs (intrauterine devices), sterilization and the morning after pill.

Currently Uganda's population stands at about 40 million people according to UBOS.

Museveniâ€™s visit to the north was a reunion