Clet Masiga (right) who led the group, being engaged by the officer in charge Cheptui Police Post after being blocked from accessing the ‘promised land’ in Bulambuli on Saturday. Photos by Paul Watala

The Police and residents on Saturday blocked a truck carrying over 50 people claiming to be Bududa landslide survivors from accessing the land that the Government has purchased in Bunambutye sub-county,Bulambuli district.

At about 2:00pm the truck arrived in Cheptui sub-county in Bulambuli, where they found two Police officers armed with one AK47 riffle. The officers ordered them to return where they were coming from.

Masiga pleaded with the officers to allow them continue with the journey, but they refused and advised him to call the officer in charge who arrived in less than 15 minutes. The officers ordered the residents that had started charging  and insulting the group to vacate the scene.

Residents threatened to deal with the group if they risked continuing to the ‘promised land'. 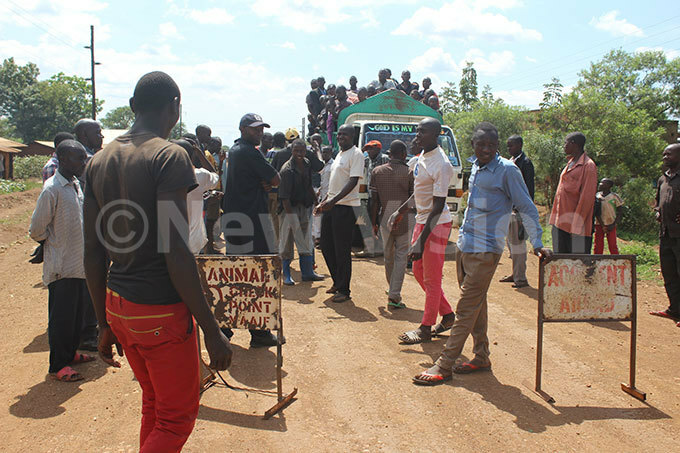 "If you want to shed blood, then continue with your journey. We are not sure if you are the right people because even your accent is not like that from Bududa. You seem to be from Budadiri," a one Musa Mafabi said.

"We do not have land for Badadiri. We shall only allow people to access this land when they come with the district leaders, MPs, officials from Office of the Prime Minister and Bulambuli district leaders," he said.

Musoni said the group was blocked from accessing the land on the orders of the Regional Police Commander and the line commissioner in the Office of the Prime Minister.

Masiga said the group had gone to Bunambutye to find out if it was true that land where they were supposed to be relocated was waterlogged as it had always been claimed by Manjiya County MP John Baptist Nambeshe.

"We did not bring these people to grab land, but to show them so that they take a decision basing on what is on the ground other than being misled by few people with selfish interests," Masiga said.

"There was a council meeting last Thursday in Bududa and Wilson Watira (the Bududa LC5 chairman) was informed. He suggested that councillors be taken for a fact-finding mission, but they were interested in the victims themselves. The group did not have money to facilitate the political leaders," he added.

Masiga said the Office of the Prime Minister and Inspector General of Police were informed and a letter written to them seeking permission to access the land was received, but was surprised to be blocked.

"We have mafias that want to benefit from tears of suffering people of Bududa by duping the Government. They know the Government will be releasing money to purchase land in Bunambtye and that is why they want to delay the process," Masiga said.

Zulaika Mujasi, the councilor representing people of Bwikhonge, where part of the land is located, said they are in full support of Government's plan to relocate Bududa people in Bunambutye, adding that the exercise should be done in a transparent way.

One of the victims said: "When we return to our villages, we are killed by landslides, we go to Bulambuli where they claim there is land for relocation, we are blocked by the Police. What is this game all about? Are there people benefiting from our suffering and continue to confuse us until we are all dead?"

Both Bududa and Bulambuli LC5 chairpersons Wilson Watira and Simon Peter Wananzofu respectively said they did not know the group that attempted to visit the land without their knowledge.