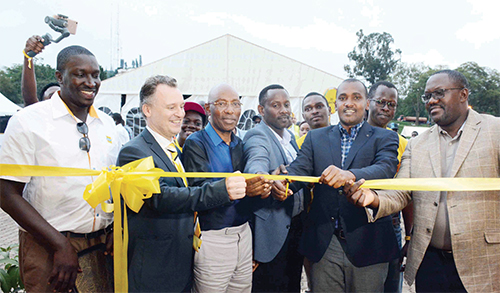 MTN has over the years built a strong international brand that is recognised for its leadership in mobile telecom in emerging markets.

With over 11 million subscribers in Uganda, the telecommunications company that boasts of a 55% market share has revolutionised the telephony landscape over its 20 years of existence in the country. On October 21, 1998, MTN Uganda launched commercial services in Uganda, just six months after acquiring and signing of the license.

The insuffi cient infrastructure such as power and roads notwithstanding, MTN has covered in excess of 90% of the urban population, providing services in over 150 towns and villages and their immediate environments across the entire country.

Subsidiary company
MTN Uganda is a subsidiary of MTN Group, a multinational telecommunications group connecting approximately 232 million people in 22 countries across Africa and the Middle East.

Licensed in April 1998 as the country's second private player in the telecom business after winning a competitive international tender, MTN has transformed Uganda's telecommunications, earning it the coveted top position among the seven telecom companies operating in the country.

"Those are the three things that have kept MTN in the fi rst position for all these years," Musisi says.

Esther Owor, the vice-chairperson of MTN Dealers' Forum, says the company has earned its position through its ability to respond to the needs of all masses. "They listen to all our issues and respond to us the distributors, who are the second point of service," Owor says.

She also notes that MTN has been instrumental in empowering its distributors through training them and being a good business partner. In addition to the above, MTN, determined to leave no stone unturned, when it came onto the scene, offering both fi xed and mobile wireless telecommunication services.

Over 2,500 payphones were installed in less than 24 months of its operation. The payphones also use wireless technology and can be used to make both local and international calls.

As early as 1999, Uganda became the fi rst country on the continent where the number of mobile subscribers surpassed the number of fixed-line users. For a country where telecommunication was a reserve for a selected trifl ing portion of the population, the ratio of mobile phones to fi xed line phones is now more than 18:1. CLICK HERE for more on this story

I sold everything to invest in MTN Uganda - Mbiire

MTN Uganda is a leading mobile telecom operator in Uganda, which for the last 20 years has helped to create jobs, revolutionalize e-commerce and broaden the country's tax base. As they celebrate 20years, Edward Kayiwa spoke to Charles Mbiire, one of the proprietors of the telecom giant about the journey so far and what lies ahead.

It is now 20 years since MTN Uganda fi rst opened shop and you were one of the brains behind it. How did it all start and how did you see this opportunity?

By 1998, Uganda was one of the few countries in the world with a reverse teledensity growth, mainly due to the political turmoil we had just gone through.

However, the country was beginning to slowly recover economically and mobile telephony was just beginning to take route, albeit at a high cost. When I visited South Africa, I saw the big difference in cost and effectiveness.

I immediately resolved that I should bring that opportunity here. I knew that one of the avenues to help the country grow was to increase business velocity in the economy through communication.

So, I partnered with MTN International. This was an international bid, monitored by the World Bank and we won it. Contrary to what is normally said, MTN Uganda is owned by MTN international from Mauritius and myself.

Although, it is managed by MTN South Africa. When we were starting, I had to sell everything I owned, including my land and houses to raise the $1m (about sh3.7b) which was needed to start, I almost failed.

Had it not been for Stanbic Bank Uganda and Standard Chartered Bank, which believed in me then, I would not have succeeded in bringing MTN here. I have since paid the banks back all their dues. CLICK HERE for more on this story

There is a brand new cellular phone on the market let me tell you; so sleek and so slender and hot hot hot! Straight from MTN, hot like Kabiriti, only for 40k! This is an advert most Ugandans will hardly forget.

Apart from the advert having an admired artiste, Bobi Wine, the phone was only sh40,000, a price that many folks found affordable.

Ideally, Kabiriti is supposed to mean something that lights up. But then, spoken as slang, Kabiriti stands for someone who is good at something, being fit or an item that can be described in those positive terms, according to an Internet source.

And in terms of size and beauty, the Kabiriti phone had a wellthought- out slim design at a time when smaller phones were held in higher regard than the bigger ones that were referred to as bricks.

Down memory lane
Before MTN launched their services and products in Uganda, Celtel had a monopoly, making it common for so many Ugandans to refer to the few available mobile handsets as Celtel. "Owning a mobile phone was a luxurious preserve of a selected few," Moses Mukasa, a client who has been an MTN subscriber since 2002, said. Mukasa got his first phone, a Sony Ericson, in 2001 after getting his first job after university. CLICK HERE for more on this story