Justice Bossa on her childhood, family and...
Next Story

The deputy general manager Xu Shangming presenting a dummy cheque of sh5m to Minister for General Duties Mary Karoro Okurut and State Minster for Relief and Disaster Preparedness Musa Ecweru as the Chinese Ambassador to Uganda Zheng Zhuqiang(R) looks on. This was at the Office of the Prime Minister on October 19, 2018. Photos by Wilfred Sanya

The Chinese community in Uganda raised over sh80m on Friday to support relief efforts in Bududa where a landslide claimed lives of at least 46 people and displaced hundreds.

Representatives of Chinese firms operating in Uganda handed over cash, cheques and assorted items to the Office of the Prime Minister on Friday.

The chairperson of the Chinese Enterprises Chamber of Commerce, Zheng Biao said the Chinese community was moved by the scale of the tragedy and would offer more humanitarian work. 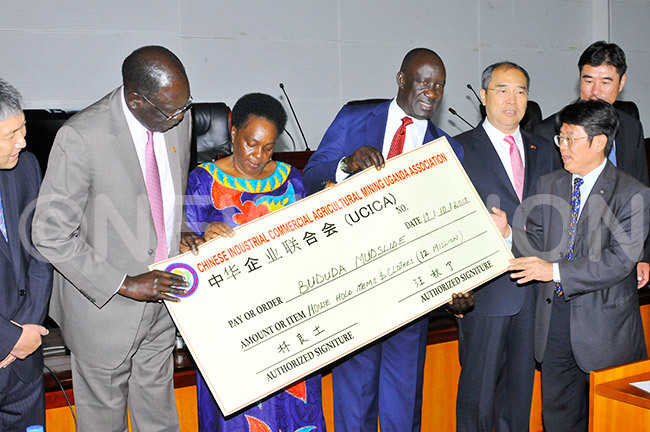 “Our attention has been drawn to the tragedy in Bududa. We approached the Office of the Prime Minister and agreed to offer support so that people can return to normal life soon,” he stated.

The minister for general duties, Mary Karooro Okurut, thanked China for supporting Uganda in both development and humanitarian work. 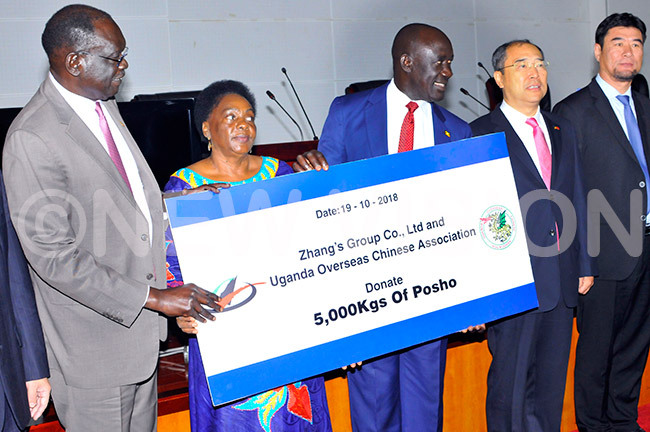 Ministers: Onek, Okurut and Ecweru together with Mr. Zhuquiang and the Chairman of the Chinese Enterprises Chamber of Commerce Uganda

The disaster left a trail of destruction across 13 villages in Bukalasi and Bubiita sub-counties, sweeping away four bridges, crops, livestock, two classroom blocks and shops.

Bududa is one of the top disaster prone areas in Uganda. In 2010, over 350 people died in the area and hundreds of households were buried. The same happened in 2011 and 2012.

The Uganda Red Cross Society has launched an emergency appeal to the public to raise sh1.5b to support the humanitarian response in affected communities.

Government plans to start relocating thousands of people from the risk-prone areas to the lowlands where residents will each get two and a half acres to start a new life.

UPL Second Round fixtures to delay