On March 24, 1980, the man dubbed the "voice of those without voice" was shot in the heart, killed by a single bullet as he prepared communion

On March 24, 1980, the man dubbed the "voice of those without voice" was shot in the heart, killed by a single bullet as he prepared communion

Pope Francis wore a blood-stained rope belt which belonged to Romero, who was murdered at the altar, as he lead the ceremony in front of tens of thousands of pilgrims from across the world.

The pontiff also used a chalice and pastoral staff belonging to Paul VI, in a canonisation being seen as a reminder of Francis's call for "a poor church for the poor".

Both men have been hailed by Francis for their courage in turbulent times and their dedication to social justice and the downtrodden.

The men's giant portraits hung on Saint Peter's Basilica along with those of five other new saints, including an orphaned youth and a German nun.

"Paul VI spent his life for Christ's Gospel, crossing new boundaries and becoming its witness in proclamation and in dialogue, a prophet of a Church turned outwards, looking to those far away and taking care of the poor," Francis said.

"It is wonderful that together with him and the other new saints today, there is Archbishop Romero, who left the security of the world, even his own safety, in order to give his life according to the Gospel, close to the poor and to his people," he added.

Uganda's Vice President Edward Ssekandi and bishops were among the dignitaries that attended the ceremony. Pope Paul VI is the one who cannonised Uganda's catholic Martyrs in 1964. He also visited Uganda in 1969. 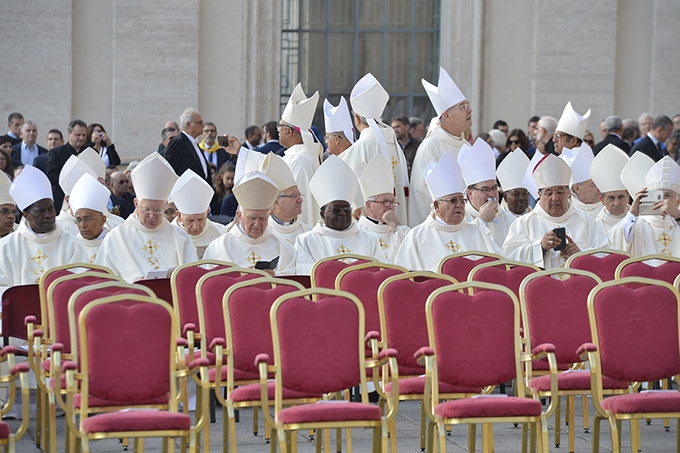 The Archbishop of Kampala Archdiocese Kizito Lwanga amidst fellow bishops during the canonisation in Rome. VPPU Photo

Romero stood up for peasant rights in the face of a right-wing backlash which painted him as a radical supporter of "liberation" theology in his small, impoverished central American nation.

On March 24, 1980, the man dubbed the "voice of those without voice" was shot in the heart, killed by a single bullet as he prepared communion. His killing came at the start of a bloody civil war which claimed some 75,000 lives.

Relics of each new saint were carried to the altar -- part of a bone for Romero and the shirt Paul VI was wearing when he was stabbed in an assassination attempt at Manila airport in 1970.

Overnight, hundreds of pilgrims from across Central America celebrated the impending canonization in El Salvador's capital.

The visitors, many in clothes printed with Romero's face, gathered in front of his tomb, in the crypt of San Salvador's central cathedral, and at the Hospital of Divine Providence chapel, where he was assassinated.

"We are arriving here to honor the memory of Monsignor Romero, who took his faith to the point of giving his life for what he believed was right," said Francisco Navarro, a 51-year-old Honduran, at the chapel along with some 30 of his compatriots.

"Since before he was killed, he defeated his killers by forgiving them. Because he knew they were going to kill him," added university professor Julia Lainez.

For a long time, efforts to recognise Romero met with heavy opposition from conservative Catholics and the Salvadoran right, who saw veiled Marxism in his sermons.

But Francis -- the first Latin American pope -- beatified Romero as a "martyr" in 2015, to popular acclaim.

Paul VI -- who encouraged Romero in his struggle -- was the first head of the Roman Catholic Church to attempt to reform the Vatican's powerful and unruly Curia, the church's governing body. It was a challenge Francis also took on.

He was also famously the first to reject the papal trappings of luxury, setting aside the traditional tiara -- a jewel-encrusted, three-tiered, conical crown -- shortly after his election in 1963 and donating its value to the poor.

It was a gesture echoed by Francis, who renounced the papal apartment and gold cross.

The softly-spoken Giovanni Battista Montini was elected pope in 1963 in a difficult period for the church, which lost many believers as populist rebellions swept across the West.

He completed the reforms of the Second Vatican Council and was the first pilgrim pope, crossing continents on his trips to meet the faithful.

At his beatification mass, Francis had hailed him as a "brave Christian".

But he was also hampered by a reputation for being weak and overly cautious.
He is most famous for reaffirming the church's ban on contraception -- despite the fact that his own advisory commission voted overwhelming to lift the prohibition.

Thank you for proposing a suspension on creating new districts