Dr. Vincent Jjumba, the Assistant Veterinary Officer in charge, Kalisizo town council said they will extend the campaign to different communities that missed the exercise.

Dr. Vincent Jjumba, the Assistant Veterinary Officer in charge, Kalisizo town council said they will extend the campaign to different communities that missed the exercise.

Over 223 dogs and 65 cats have been vaccinated in a mass campaign against rabies in Kyotera district. This is among various activities to mark the 12th World Rabies Day which concluded Friday last week.

Kyotera hosted the event at Kalisizo town council play ground attracting veterinarians from across the country and district officials.

According to World Health Organisation (WHO), rabies is an infectious viral disease that is almost always fatal following the onset of clinical symptoms.

Speaking at the event, Dr. Sylvia Angubau Baluka, the President- Uganda Veterinary Association (UVA), said rabies has been neglected for a long time yet it is a serious pandemic in Uganda and the world over.

She said government has not done enough to control and prevent rabies which has continuosly killed people especially children who are the most vulnerable.

"We are working out a multi-pronged approach (reaching different audiences at the same time) to make sure that we control, prevent eventually eliminate rabies by the deadline of 2030," she explained.

Dr. Baluka emphasised the need for collaboration with neighbouring countries over cross-boundary movement of stray dogs and foxes. 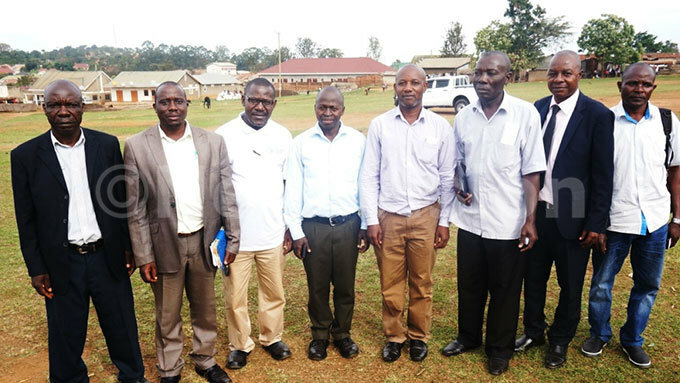 Vet doctors in a group photo at Kalisizo playground

She argued that stray dogs usually cross the border and infect those already vaccinated on either side, which frustrates their efforts to eliminate the disease.

"We want to use the Pan-African Network for the control of Rabies and work closely with our neighbouring countries to fight rabies so as to have a safe Africa," she added.

Dr. Kiwanuka Kimbugwe, the Kyotera District Veterinary Officer (DVO) said rabies is a serious problem due to a big number of the stray dogs and foxes.

He explained that almost 85% of the dogs in the district  do not have owners yet they are not vaccinated hence a threat to the people. "A rabied dog can attack and bite about 10 people before it dies," he said.

Dr. Vincent Jjumba, the Assistant Veterinary Officer in charge,  Kalisizo town council said they will extend the campaign to different communities that missed the exercise.

"We have 800 stray dogs in the town council coming from different villages to look for food. They seem not to belong to anyone so they just roam around," he said.

In order to reduce the problem, Kimbugwe advised the keepers to have good handling facilities, feed, vaccinate and register them for close monitoring.

He cautioned the public to desist from consuming meat from domestic animals which have been mauled by dogs since it becomes infected after the attack.

Ssemusu Nassejje, the chairperson of the Kyotera Production committee, appealed to government to put  more effort in the campaign to eliminate rabies in the country.

She said two residents were killed by rabied dogs in the last two years while others admitted in various health centres and over 50 goats mauled. 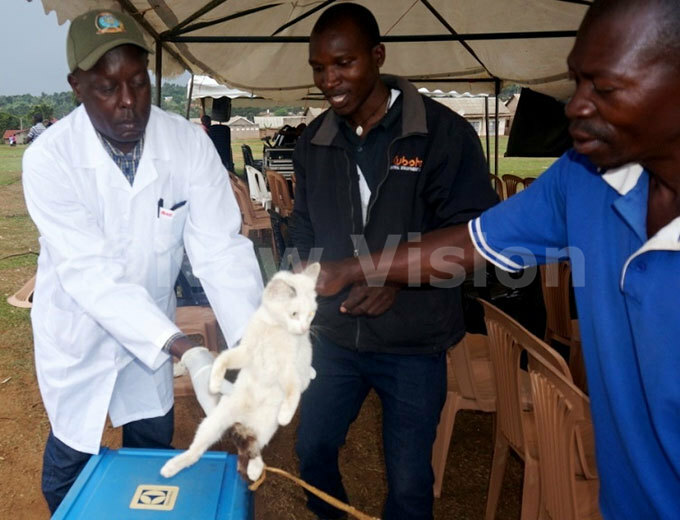 The event was organised by UVA in collaboration with Food and Agricultural Organisation (FAO), Ministry of Agriculture, Animal Industry and Fisheries (MAAIF).

Dr. Lumu who represented MAAIF pledged to collaborate with the veterinarians in their campaign to end the rabies pandemic. He appealed to victims of dogs and fox attacks to go to regional hospitals for rabies vaccines.

He  said the ministry has devised a plan to train vets in each region on how to collect and store rabies samples before sending them to the NAADEC -Entebbe for testing and confirmation.

The World Health Organisation (WHO) estimates there are 55,000 rabies deaths every year in the world while the Global Alliance for Rabies control, estimates a total of 70,000 deaths, with 10 million treated for bites from potentially infected dogs. Namubiru displaying a vaccination chat of her dog

At the function, veterinarians said  hunting and poisoning stray dogs is not economically feasible as far as reducing rabies in the country is concerned.

They further suggested that its high time government looked at dogs as another source of income in the country.

Dr. Kimbugwe said Uganda has to change its culture and mindset and turn dogs into income sources.

He added that there are several countries where dog meat is a delicacy and Uganda should take advantage of the opportunity.

"Why can't we get an investor who can set up a dog-meat factory, park the meat and export it? This way, people will hunt for stray dogs or even breed them for economic purposes," he said

He added that in Kyotera, there are roughly over 20,000 dogs in Kyotera alone and majority live in the bush. He noted that if each dog could go for shs100,000 and above, then people would vaccinate and raise them for money.