Uganda’s public debt has been sporadically rising from only $1.9b in the 2008/09 financial year to over $11b currently

Finance minister Matia Kasaija is expected to brief Parliament on the state of Uganda’s debt today. Photo by Kennedy Oryema

Uganda’s public debt has been sporadically rising from only $1.9b in the 2008/09 financial year to over $11b currently

Members of Parliament on the Public Accounts Committee have expressed fears that the high rate at which the government is borrowing is not sustainable and risking the country's national assets in the event that government fails to pay back the money.

The MPs last week had a discussion with finance ministry technocrats on the management of Uganda's public debt during which they also expressed concern that government has secured many loans which are idle as the country pays interest on them.

In the 2017 Auditor General's report, it was revealed that over sh18 trillion which government had borrowed was lying idle due to delayed implementation of the projects for which the money had been borrowed.

"As a committee, we have come across so many loans which are redundant and we continue paying interest on them," said Angelina Osege, the chairperson of the committee.

Wanyera explained that upon the implementation of the Standard Gauge Railway, the country's debt to GDP ratio will reach 47%, which is close to the red mark of 50% which is the maximum recommended for borrowing, beyond which further borrowing becomes unsustainable.

Kachumbala County MP Patrick Isiagi Opolot cited countries like Zambia and Ghana which have failed to pay back money borrowed from China and now the Asian country threatening to take over their national assets to recover their money.

Opolot also castigated government over what he called over borrowing domestically, which he said denies adequate credit to the private sector companies and therefore not only hurts the economy, but also worsens the country's public debt burden because loans from commercial banks are very expensive.

"We do not want Uganda to get into such problems arising from government over borrowing. The ministry of finance should not fail the country in this," Opolot argued.

Kwania County MP Tony Ayoo said: "I was shocked to learn that government is planning to get a commercial loan of over $100m from Standard Chartered Bank to buy CCTV cameras. There is no economic sense in that. There are reports that China is likely to take over Kenya's Standard Gauge Railway over inability to pay the loan." 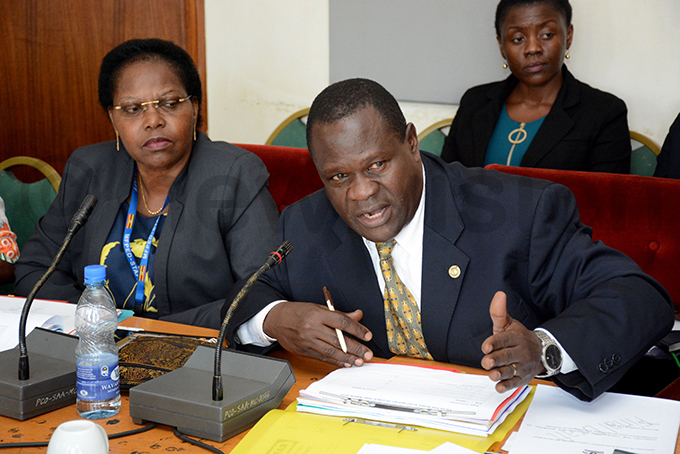 Deputy secretary to the treasury Patrick Ocailap appearing before the public accounts committee at Parliament on Wednesday. Photo by Miriam Namutebi

Allaying the fears of the MPs, the deputy secretary to the Treasury, Patrick Ocailap, who had led the delegation from the finance ministry said: "We will ensure we live within what we can afford in the course of borrowing. Zambia made a mistake when they went for expensive loans for their recurrent expenditures. Most of our loans are for infrastructure projects which will create a strong base for our economy."

Explaining concerns on government borrowing expensive loans from commercial banks, Ocailap explained that they only go for such loans as a last resort after failing to secure money from the other available options of getting cheaper loans.

With sh10trillion (32.7%) of the sh32.7trillion for the 2018/19 national budget allocated towards debt repayment, this now takes the biggest portion of the national budget.

Uganda's public debt has been sporadically rising from only $1.9b in the 2008/09 financial year to over $11b currently.

According to the order paper, the minister for finance is today (Tuesday) expected to present a statement during Parliament's plenary sitting on the state of Uganda's public debt.

Itâ€™s a New Life victory at U-14 championships