Nakaseke South MP Paul Kasana Luttamaguzi (DP) and Manjiya County MP John Baptist Nambeshe (NRM) have appealed to their colleagues from across the political divide to turn up in big numbers today (Tuesday) and vote against the 0.5% tax on mobile money.

Last week, Parliament failed to pass the Excise Duty (Amendment) Bill after it failed to raise the required quorum of 126 MPs.

Anxiety regarding the Bill is high because Parliament is expected to either pass the Bill today or reject it.

Luttamaguzi and Nambeshe told journalists on Monday at Parliament that so many NRM MPs have assured them they will oppose the tax.

"I can confidently tell you that so many MPs are with us in this fight against the mobile money tax. I am sure President Yoweri Museveni will have a small group of MPs attending the caucus he has called regarding the matter," Nambeshe stated.

Nambeshe argued that out of the 15 organisations that appeared before the Parliament finance committee to present their views, 13 of them asked Parliament to reject it. 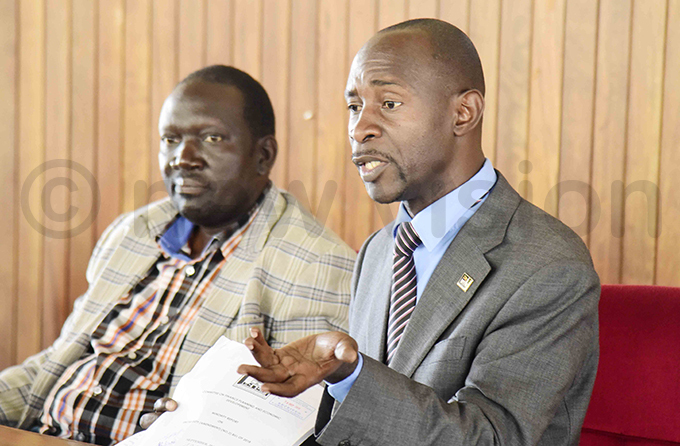 Emphasising the arguments various stakeholders like the Kampala Mobile Money Dealers Association and telecom operators had presented to the committee, Luttamaguzi said the 0.5% excise duty is double taxation as government already charges excise duty of 15% on transaction fees and 10% withholding tax on agent commissions.

"This makes the proposed tax regressive and unfair and therefore likely to suppress the mobile money business," Luttamaguzi argued.

While appearing before the committee, the telecom operators explained that the tax burden on the telecom sector is already high and therefore any more taxes on the sector would discourage consumption, stifle growth and have the net effect of reducing revenue to government.

Luttamaguzi, who together with Kachumbala County MP Patrick Opolot Isiagi (NRM) and Kagoma County MP Moses Walyomu, presented a minority report asking Parliament to completely reject the Bill, said: "The proposed 0.5% tax on mobile money services is discriminative considering that the same tax has not been imposed on financial institutions and other payment channels which serve the same purpose."

Nambashe appealed to especially the NRM MPs to follow the views of their constituents as they vote on the matter.

"We have almost one year away to the campaigns for the next general elections. MPs who will not have voted against the tax will face the wrath of their people. They will have dug their political graves. Ugandans have rejected the tax," he argued.

Luttamaguzi commended the Deputy Speaker of Parliament, Jacob Oulanya, for the decision he made last Thursday that there would be open voting on the matter so that people know who voted for what.

On the back of public uproar, Kyadondo East MP Robert Kyagulanyi and civil society groups led street protests against the taxes on mobile money and social media.

Public pressure compelled government to redraft the Bill to reduce the tax from 1% to 0.5% and to have it restricted to only withdrawals.

Despite that, a number of MPs and other stakeholders want the tax to be complexly scrapped.

How debutants JMC Hippos have shaken the league