In a bid to bring services closer to the consumers, Umeme has embarked on a grand plan of opening service centres in remote areas with power consumption potential.

In a bid to bring services closer to the consumers, Umeme has embarked on a grand plan of opening service centres in remote areas with power consumption potential.

For all the 10 years he has been in business, he has had to make do with Umeme's services from its office located 65km away in Mbale town.

Like Ojangole, many residents in the township felt a huge sense of relief when Umeme opened its first service centre (office) in the district in 63 years! Pallisa district, like many others across the country, has a huge business potential in health, education, grinding mills, kiosks, restaurants, fabrication business and dairy farming, among others.

The potential has even become higher with the planned tarmacking of the 65km-long Tirinyi-PallisaKumi road, which is expected to skyrocket economic activities in Pallisa township and the surrounding districts.

"Many of our local entrepreneurs have under-invested because of power supply related issues. I am optimistic that with the opening of this service centre, there will be total transformation," Michael Okurut, the Pallisa LC5 boss, who officiated at the launch, said. 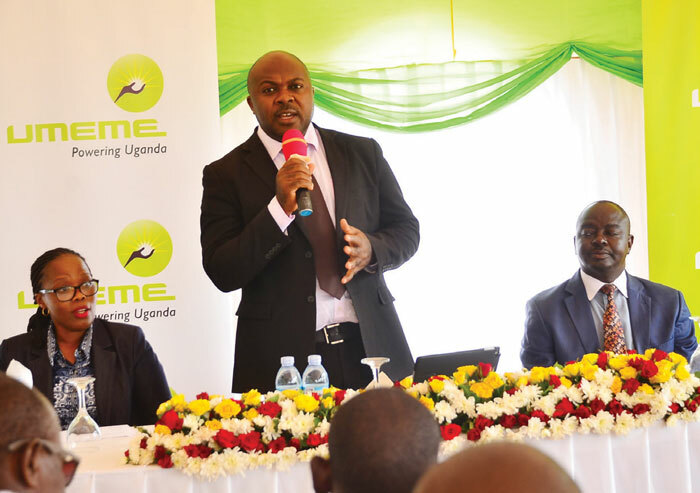 Babungi gives his remarks as Nsubuga and Okurut listen

"The clientele (potential consumers) in Pallisa today is quite big, only that many continued to use candles because they could not bear the inconvenience of commuting to Mbale, that is about 65km away," he adds.

The influx of the local residents, the local government leadership, bank representatives and representatives of other organizations plying their trade in district, was a confirmation that the launch of the new service centre in Pallisa town located on NYM Building on Outa Road was long overdue.

In a bid to bring services closer to the consumers, Umeme has embarked on a grand plan of opening service centres in remote areas with power consumption potential. The service strategy underscores process simplification, automation and investments intended to improve network performance, the managing director of Umeme, Selestine Babungi, disclosed.

He regrets the difficulty consumers in Bukedi, Elgon, and Sebei sub regions in the eastern part of the country, have endured for the last 63 years, whenever they wanted to access services, as they would have to travel to the Mbale Umeme office.

Bukedi sub-region constitutes Busia, Tororo, Butaleja Kibuuku, Butebo, and Budaka districts. Elgon sub-region is constituted of Namisindwa, Manafwa, Mbale Bulambuli, Sironko and Mbale districts. Sebei sub-region includes districts of Kapchorwa, Kween and Bukwo respectively. "Until the grand plan that we have considered to roll out in earnest, we had 37 service centres across the 25 Umeme districts.

Unfortunately, some of these service centres lay 80km away from settlements of potential power consumers, particularly those hailing from the remote parts of the country side, rendering it difficult for our customers to access some of our services," observes the managing director.

It is against this background, Babungi says, Umeme has prioritised opening more service centres. "More new service centres will be opened in Kapchorwa, Sironko, Bubulo and Kumi as part of the company's plan to bring services closer to the people," he reveals. The Umeme office in Mbale that has existed for 63 years has previously served 15 districts, including Pallisa, Budaka, Bulambuli, Bukedea, Kumi, Kapchorwa, Bubulo, Manafwa and Sironko.

Babungi says the opening of several satellite offices in their area of jurisdiction will help bridge service gaps that some of their customers maybe be experiencing. He said the company will continue investing in network infrastructure in readiness for the new generation capacity from Isimba and Karuma dams.

Florence Nsubuga, the Umeme chief operations officer, encouraged the people of Pallisa to make the good use of the office as it will provide all the services that they used to travel to Mbale for. "We are going to go out there to have engagements with much of Pallisa's 400,000 population to improve the 5% current household connectivity rate," Nsubuga said.

She said Umeme would intensify its efforts to increase access to 40% by 2025 from the current 23%, in line with government's infrastructure development and access agenda. Paul Ssempira, the Mbale district manager, said the service centre would help create a closer relationship with the over 3,000 current customers or 80,000 households that have been travelling 65km to Mbale to get services. 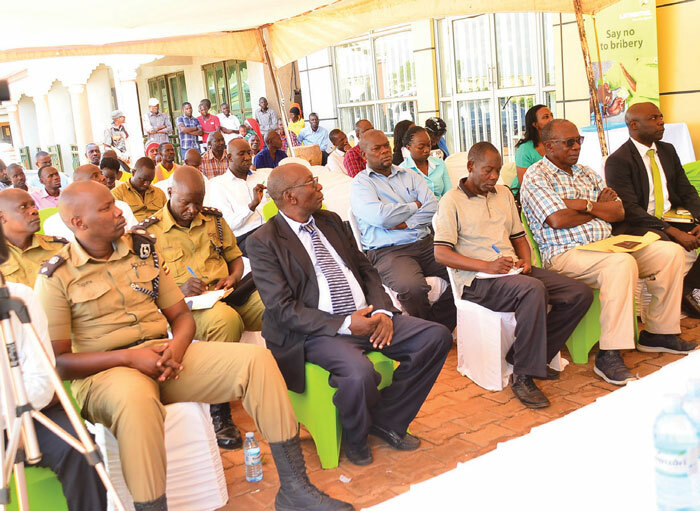 Top security officials and other guests during the launch

He said the branch will also help in reducing the rampant power thefts in the area, boost collections, reduce losses and increase access through new connections. Okurut pledged maximum cooperation to Umeme as they start operations in the district. He also promised to help Umeme fight the power theft menace in the district.

"Today is a historic day in our district. I want to thank Umeme for responding positively to our call to bring services closer to the people. We are receiving this centre with open hands," Okurut said. Obed Collins, the Pallisa resident district commissioner, described the opening of the centre as the beginning of the transformation efforts of the district.

"It has been too expensive travelling to Mbale to seek services, but thank God today, Umeme has brought light to Pallisa and the neighbouring districts. Power brings about transformation and I am sure Pallisa will be transformed with the the bringing closer of services to our people," Collins said.

In 2017, Umeme rolled out customer outreach programmes in rural areas with the aim of bringing services closer to customers, including education on dangers of power theft and vandalism, safe use of power, energy efficiency tips and e-payment options. Mobile service desks were set up in high growth areas and potential customers proactively engaged to connect electricity to their homes.

Before these initiatives, illegal connections in the sub-region cost Umeme an estimated sh20b annually. In a move to avert the situation, the company launched operations against illegal power users in the area at the start of last year. Ssempira said there has been a 30% increase in the number of new connections to 8,431 in 2017 from 3,541 in 2016. The region also contributed up to 10% of the 19% losses that the company registered at the end of 2016. However, partly due to the interventions, the company recorded lower energy loss of 17.2% in 2017.