PM Rugunda off to New York for UN General Assembly

The Prime Minister, representing President Yoweri Museveni, is expected to deliver a statement to the 73rd Session of the General Assembly.

The Prime Minister, representing President Yoweri Museveni, is expected to deliver a statement to the 73rd Session of the General Assembly.

Ugandan Prime Minister, Dr Ruhakana Rugunda, flew out of the country on Sunday bound for New York, US to attend the UN General Assembly, where he will represent President Yoweri Museveni.

Rugunda is expected to deliver a statement to the 73rd Session of the General Assembly, a statement issued by Julius Mucunguzi, the PM's communications advisor.

This year's theme is: Making the United Nations relevant to all peolle: Global Leadership and Shared responsibility for peaceful, equitable and sustainable societies.

Speaking before departure, Rugunda said Uganda considers the UN assembly as an important milestone in the consolidation of international efforts to promote equitable and sustainable development as well as addressing peace and security challenges across the globe.

He said that during the session, Uganda will continue supporting and raising the profile of regional peace and security initiatives that are championed by President Museveni and other regional leaders under the auspices of IGAD, East African Community and African Union to pacify the region, especially in Somalia and South Sudan.

The Prime Minister is also scheduled to speak at a series of high-level side events.


World leaders at UN look for progress on N.Korea, brace for Trump

North Korea and Iran will dominate this week's gathering of world leaders at the United Nations, where President Donald Trump will be in the spotlight as he continues to upend global diplomacy.

After warming up to North Korean leader Kim Jong Un and ditching the Iran nuclear deal, the unpredictable Trump takes the podium on Tuesday to face foes and increasingly uneasy allies at the UN General Assembly.

Marine One, carrying US President Donald Trump, lands in lower Manhattan in New York on Sunday. Trump is in New York for the UN General Assembly

On Wednesday, he will for the first time chair a Security Council meeting on non-proliferation and weapons of mass destruction that will focus heavily on Iran -- likely triggering a clash with other big powers.

"It will be the most watched Security Council meeting ever," US Ambassador Nikki Haley said of Trump's first time wielding the gavel.

The diplomatic gathering will take stock of the thaw in relations between North and South Korea, and groundbreaking US-North Korea moves to address the threat from Pyongyang's nuclear and ballistic missile programs.

Last year, world leaders shuddered when Trump threatened to totally destroy North Korea and belittled Kim as "Rocket Man" who was "on a suicide mission."

An exchange of insults ensued, with Kim calling out the "mentally deranged US dotard."

Trump's address to the assembly will be the "polar opposite of what we heard last year," said Suzanne DiMaggio, an expert on North Korea and Iran at the Carnegie Endowment for International Peace.

The president will tout his June face-to-face with Kim as a major diplomatic win but "he should think twice if he plans to repeat his claim that North Korea is no longer a nuclear threat," she said.

Despite the Trump-Kim landmark summit in Singapore, there has been little concrete progress on denuclearization.

North Korean Foreign Minister Ri Yong Ho has been invited by US Secretary of State Mike Pompeo for talks on the sidelines of the assembly meeting. Ri is scheduled to deliver his address on September 29.

South Korea's President Moon Jae-in will encourage Trump to press on with the rapprochement, but the US president is likely to get a different message from Japanese Prime Minister Shinzo Abe, who has taken a tough stance on maintaining sanctions pressure on Pyongyang.

When he takes the podium shortly after Trump on Tuesday, Iranian President Hassan Rouhani will meanwhile address the fall-out from the US decision to abandon the 2015 nuclear deal which lifted international sanctions in exchange for curbs to Iran's nuclear program.

European countries along with Russia and China are still working to salvage the accord and will use the council meeting chaired by Trump to defend what they consider a milestone in non-proliferation.

"The members of the Security Council are not going to take kindly to being lectured by President Trump on the subject of Iran," said DiMaggio.

"These very countries, which include our closest allies, are now facing US sanctions as they scramble to save the agreement."

Pompeo reiterated Sunday that Trump is willing to meet Rouhani as part of a "constructive dialogue" -- but added on NBC's "Meet the Press" that that seemed unlikely at present.

In a weekend op-ed in the Washington Post, Rouhani charged that Trump's offer of direct talks was not "genuine" and came with a list of "openly insulting pre-conditions."

And Haley -- while she condemned "any terrorist attack" after the deadly assault on a military parade in southwest Iran -- urged Rouhani to acknowledge popular discontent.

"He has oppressed his people for a long time," Haley told CNN on Sunday. 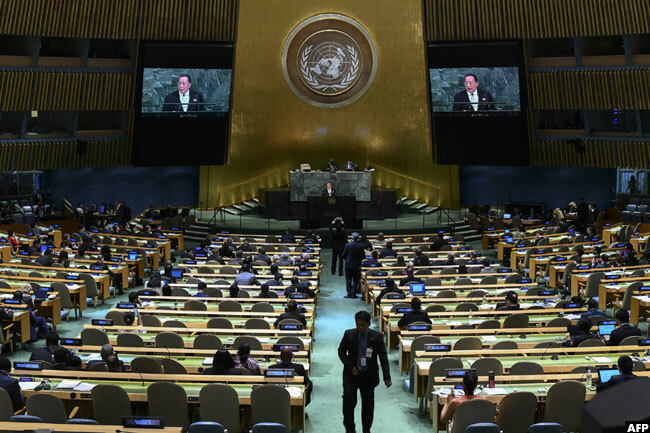 A view of last year's assembly

The UN rendezvous takes place during a sharp divide between the United States, accused of turning its back on multilateralism, and countries that view the global rules-based order as their best hope to tackle the world's problems.

Struggling with tighter budgets from US cuts, the United Nations has been put on the defensive as its peace efforts in Syria, Libya and Yemen fall short.

"Multilateralism is under attack from many different directions precisely when we need it most," UN Secretary-General Antonio Guterres said.

About 130 heads of state and government are turning up for the six-day marathon of speeches and meetings on tackling a long list of issues from climate change to poverty.

Russia and China will be represented by their foreign ministers.

Among those making their debut on the world stage will be Ethiopia's Prime Minister Abiy Ahmed, who has signed a historic peace deal with Eritrea, Zimbabwe's Emmerson Mnangagwa and Cuban President Miguel Diaz-Canel.