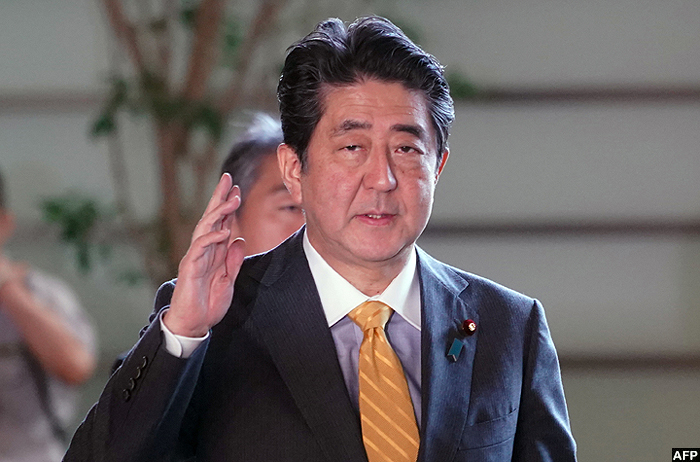 Shinzo Abe is poised to win a third term as head of his political party on Thursday, putting him on track to become Japan's longest-serving premier and realise his dream of reforming the constitution.

Polls show Abe, 63, is expected to romp to victory in a two-horse race for the leadership of his conservative Liberal Democratic Party (LDP) that will effectively hand him three more years as PM.

Only a few months ago, Abe's continued leadership at the helm of the world's third-biggest economy was less assured, as he became mired in a series of cronyism and cover-up scandals.

Ishiba has said he is running to "restore confidence in the government, which should be at the service of citizens" after Abe's administration became embroiled in simultaneous influence-peddling, cover-up and sexual harassment cases.

But Abe survived these problems -- despite a dip in popularity -- and recent surveys show he is likely to win two-thirds of the votes in the election, in which LDP lawmakers and party members are eligible to vote.

"It is almost certain that Mr Abe will get his third term," said Yu Uchiyama, political scientist from the University of Tokyo.

"The issue is not whether Abe will win or lose, it is how he wins. If it is not an overwhelming landslide victory, then he might become a lame duck and might see his power decline," added Uchiyama.

Abe rules his party with an iron grip and the party in turn enjoys a huge parliamentary majority with almost no party political opposition to speak of -- raising concerns for some.

"The current situation is a serious matter for democracy in Japan. The biggest challenge in Japanese politics is how to revive competition and the vibrancy of politics in Japan," said Uchiyama.

The Asahi Shimbun daily, one of the more critical voices in the Japanese media, said in a recent editorial that Abe "should not be allowed to continue leading the nation without facing a rigorous post-mortem on his performance, which has been marked by the harmful effects of his dominant political power".

Abe has frequently voiced his wish to rewrite Japan's post-World War II constitution, imposed by the victorious US occupiers, which forces the country to "forever renounce war" and dictates that armed forces will "never be maintained".

"The revision of the Constitution is a long-held policy goal" of the LDP, Abe said recently. "We cannot keep just discussing it."

Abe insists any changes would merely remove the country's well-equipped Self-Defense Forces from the constitutional paradox whereby they should not technically exist.

But any changes to the text would be hugely sensitive in pacifist Japan and almost certainly greeted with fury in China and the Koreas, 20th-century victims of Japanese military aggression.

In addition, surveys show that tinkering with the legal text is far from top of most Japanese voters' to-do list, as the country faces an ageing and declining population and a still-sluggish economy.

"Most voters simply do not see revision as a top priority for the government and Diet," said Tobias Harris, adding it is seen as a "costly distraction that could trigger a backlash vote."

Even if Abe manages to force a revision through parliament, he would face a referendum, raising the prospect of a "Brexit"-style political meltdown if the people voted against him, said Uchiyama.

LDP leadership elections must be held every three years. Abe was elected unopposed for a new term in 2015, which should have been his last. However, the party changed its rules to allow him to stand a third time.