At 20 years in gospel music, Sseku yearns ...
Next Story

Is Jose Chameleone's marriage on the rocks again?

All seemed well in Jose Chameleone's home, or so, his religious followers and fans thought.

But on Sunday afternoon, the celebrated singer, real names Joseph Mayanja, took to Facebook to announce what seemed to be yet another breakup with his long-time love, Daniella Atim.

Is it only one of the usual tiffs again? A well-choreographed publicity stunt? We can only guess. But what could be certain is, as Chameleone somewhat portrayed it, it is not well, and it has not been well.

"But for us who know what we are going through.. Enough is enough!! We need to live beyond our egos!!" he wrote in a post that went viral.

He announced, "I am single and Not searching!!" 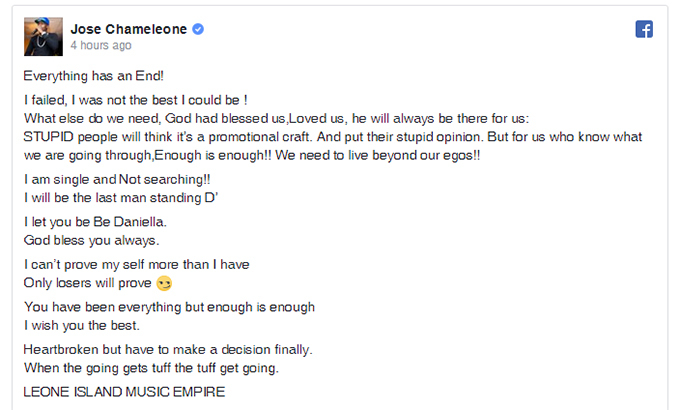 This comes barely six months after the couple welcomed their fifth child in the United Kingdom.

In early 2017, Chameleone was engaged in a series of squabbles with the wife, amid allegations of domestic-violence. Atim dragged him to court seeking for a divorce.

She accused the father of her then four children of being a drunkard and a cruel man who physically assaulted her and her children.

Daniella, as she is commonly known, wanted court to nullify their then nine-year-old marriage, but she later withdrew the case and opted to resolve the matter outside court. In June that year, after the couple resolved its issues, they along with their children came to Vision Group offices, to show that they had buried the hatchet. A happy couple and family, they displayed affection in front of cameras.

"It was unfortunate that our conflict spilled over to the media. As a family man, Daniella could have accused me of failing in some of my obligations as a man. I resolved it and we are now doing well," said Chameleone then.

Well, only a year on from that episode, Chameleone has gone public.

"I let you be Be Daniella. God bless you always," he wrote. "You have been everything but enough is enough. I wish you the best."

Let us see how it turns out.