Martha Babirye struggles to get out of the bunker on hole 18 on Friday. Photo by Michael Nsubuga

Uganda's Martha Babirye could be headed towards achieving one of her biggest golfing career moments after she maintained her lead in the Castle Lite Uganda Ladies Open at Entebbe Club.

Playing off handicap six, the Kampala golfer returned five-over-par 76, similar to what she played in the opening round, to stay ahead with one stroke ahead of Entebbe golfer Irene Nakalembe who is tied in second place with Tanzania Lugalo Golf Club's Hawa Wanyeche with a total score of 153 gross.

Another Tanzanian, Neema Olomi, who returned the day's best score of 74 gross jumped from tenth position to fourth after the second round with Kenya Limuru Golf Club's Mwongeli Nzioka also tied in fifth place with defending champion Angel Eaton.

Babirye should have been ahead by over five strokes but gave away her two stroke lead going to the 18th green where a triple bogey outdid all the good golf she had enjoyed on the day.

"I saved a lot of pars today but when I fell in the bank, I wanted to chip near the pin but hadn't tested the sand so I failed to get out because the sand was heavy. But I will still remain composed and play my normal game; if it was meant for me I will win it; if it doesn't I will learn from the experience but my performance has made me believe I can win this championship very soon," Babirye stated. 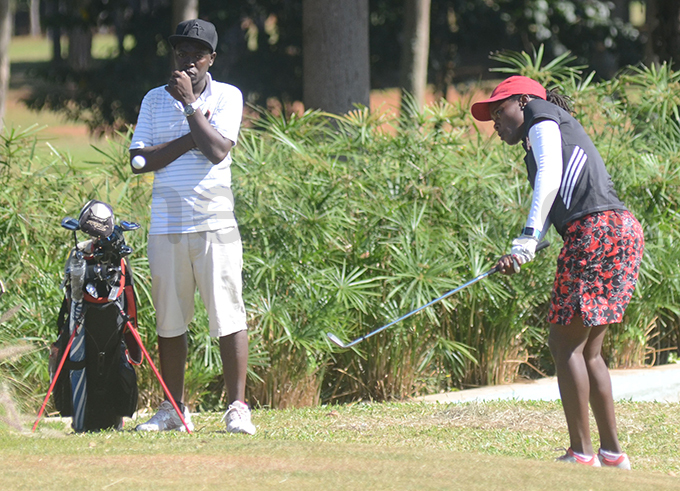 Irene Nakalembe in action on Day Two at the Entebbe course. Photo by Michael Nsubuga

Nakalembe who improved her day-one score by a stroke also blamed her double bogey on the par4 No17 and her inaccurate second approach shot on the 18th for her day's 76.

"We still have another 18 holes to play so it will get better," Nakalembe said.

Defending champion Angel Eaton is four strokes behind the leader and still blamed her failure to master the first nine.

"It is a tough front nine and again I started badly going out of bounds on hole No3. I think tomorrow's scores will greatly determine who wins it; I will just try to adjust my game tomorrow," Eaton stated.

Leaderboard after 2nd round