Simple blood test may reveal your body's i...
Next Story

The drugs given included a wide range of items for all departments including supplies and those used for acupuncture and Chinese doctrine.

The drugs given included a wide range of items for all departments including supplies and those used for acupuncture and Chinese doctrine.

Health minister Dr. Jane Ruth Aceng said the batch of medicines and medical supplies will effectively improve the current shortage of medicines at the hospital.

Describing the health facility as the face of China to Uganda, Aceng applauded the hospital medical staff for registering a remarkable improvement in the number of patients seeking medical care at the facility.

"We are happy to see that the statistics for patient care is improving not only in surgical areas, but also in maternal and child care as well."

China's ambassador to Uganda, Zheng Zhuqiang, said the 289 assorted medicines and medical supplies batch is the implementation of the requirements of the protocol that was signed by the governments of Uganda and China.

The batch included a wide range of items for all departments, including supplies and those used for acupuncture and Chinese doctrine. 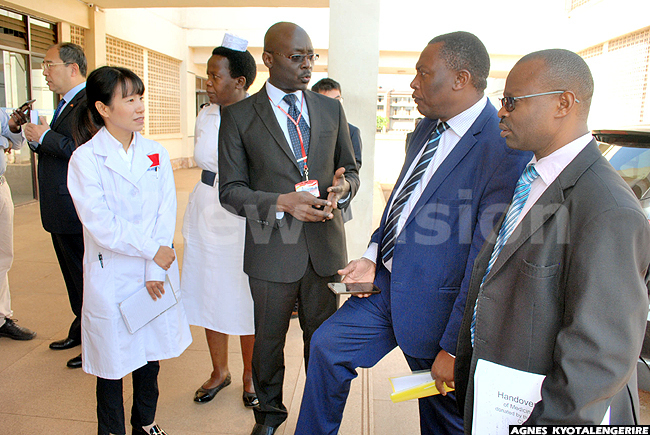 Hospital director Dr. Emmanuel Batibwe (second from left) chats with other officials after the hand over 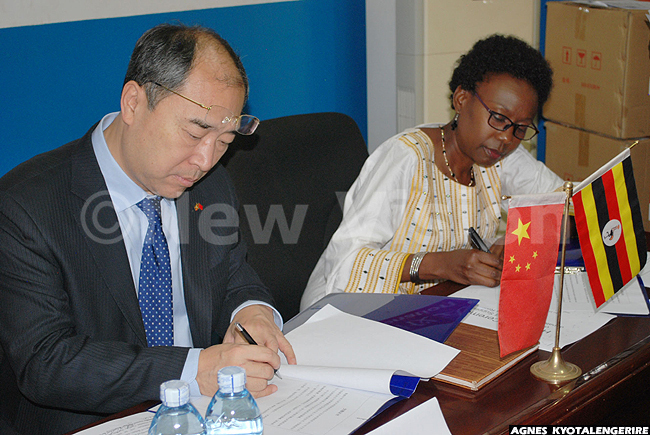 Dr. Charles Olara, the director of clinical services at the health ministry, said the medicines are one of the key inputs for service delivery.

It is a proxy for quality of care. When patients get to hospital and they do not get the medicines, they feel they are not getting the desired services, Olara added.

He said this tenth donation from the Chinese government goes a long way in supplementing what  the government of Uganda is providing. This, according to the doctor, will definitely improve the quality of care and patient outcomes of this facility.

Highlighting on the state of medicine supply at the hospital, the director, Dr. Emmanuel Batibwe, said the facility normally receives medicines from National Medical Stores up to the tune of about sh1.2b as per budget.

"Although, sometimes there are shortcomings and currently we received about 78% of what we had required," he said.

"In addition, the government of China continues to provide medical supplies, as well as a team of medical specialists.

"When we combine these, they are able to alleviate our drug shortage by something of significance," said Batibwe.

With a bed capacity of 100, Naguru General Hospital was constructed and donated by the China in January 2012.

Its operation activities are mainly funded by the government of Uganda at a cost of about sh6.5b per year.