The ward was put in place to create more space for obstetric fistula patients.

Hospital staff pose for a group photo outside the centre. Photos by Adolf Ayoreka

The ward was put in place to create more space for obstetric fistula patients.

HEALTH
NATIONAL - Mbarara Regional Referral Hospital under the department of obstetrics and gynecology on Wednesday  commissioned a fistula ward that was constructed with support from Medicine for Humanity a non-government organisation from the US, California.
The ward was put in place to create more space for obstetric fistula patients. Dr. Musa Kayondo, the head of obstetrics and gynecology department,  said the old ward was accommodating only six beds which could not match with the number of fistula patients.
The ward  has been constructed with in 10 months at a sum of sh300m, a donation from Medicine for Humanity in California.
Obstetric fistula is a hole between the vagina and rectum or bladder that is caused by prolonged obstructed labour, leaving a woman incontinent of urine or feces or both.
Kayondo noted that obstetric fistula is a serious condition among mothers. Fistula is a result of difficulty in delivery especially by those who attempt to deliver without a health worker. He says in the process some women get a ruptured pelvis.
Kayondo revealed that according to the Uganda demographic and health survey, the national prevalence of obstetric and fistula patients stands at 2% and over 200,000 women get obstetric fistula very year. 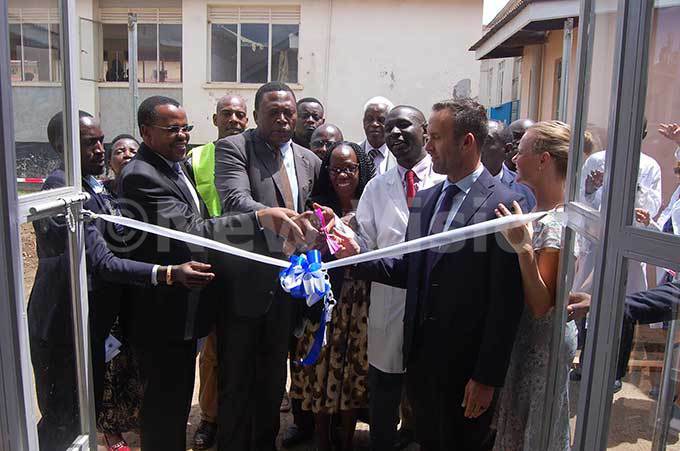 Olara (centre) and other health officials commissioning the ward

He says this collaboration with Medicine for Humanity started in 2009 with an aim of training post graduate students of obstetrics and gynecology in obstetric fistula care and fistula surgery.
"Most patients we receive here are from the villages, very poor and cannot afford medication. This collaboration has not only grown in treating  fistula patients, but also in providing gynecology services with some specialties like dealing with female pelvic flow disorders, Kayondo said.
He said since 2009, they have carried out four camps. Each of these camps treats over 60 fistula patients and so far they have treated over 512 fistula patients since 2009. Furthermore, the collaboration has helped in training of fistula surgeons from Rwanda, DRCongo, Kenya and Somalia.
"Am happy that this centre has come and we hope that this will increase on the services, before we would have patients on the floor, no beds because we used to put them in the former laundry room but am thankful to the Medicine for Humanity for providing us this centre where our  nurses and midiwives can treat these women  with dignity" said Kayondo.
Dr.Charles Olaro, the director clinical services under the  health ministry hailed the collaboration of Mbarara Regional Referral Hospital and Medicine for Humanity for providing the centre that is going to promote primary prevention and improve the dignity of fistula patients.
Olaro commended the hospital for extending better and specialised services to the people despite of the limited number of staff which he says the ministry is taking care of and will  recruit more health workers. "It's not how much you can offer but rather the willingness to give, that's why we are here enjoying the fruits of this collaboration,"said Olaro.
He also noted that the Government is in the process of improving the capacity of health center II's to elevate them to the level of health center III's so that these have the capacity to handle specialised services.
On obstetric fistula, Olaro noted that more research is needed to  find out the social issues which cause fistula and how this stigma among the affected women can be reduced.
"There is need to carry out  sensitisation with in communities on the social stigma imposed on the affected women because some still fear coming to the hospitals and end up dying. He asked those in charge  of the centre to ensure the facility is well maintained.
Dr. Barigye Celestine, the hospital director,  asked the health ministry to think of sending them more staff since the whole department of obstetric and gynecology has only five midwives and nurses.
Related links
Parents urged to keep girls in school to end fistula
Fistula healing goes beyond surgery
Adolf Ayoreka