ASP Muhammad Kirumira laid to rest in Mpigi
Next Story

President Yoweri Museveni has announced the creation of a toll-free hotline to fight corruption in the public sector.

"These corrupt officials are easy to uproot. Just expose them and see what happens to them and by the way, the toll free numbers belong to my office," Museveni said. "Uganda is ready takeoff apart from a few problems like corruption."

He was addressing the Nation on the recent events in the country at State House, Entebbe on Sunday.

Museveni said pessimism among Ugandans was being spread by liars with malicious intent. He said their actions were affecting sectors such as tourism but that they would be defeated.

Museveni  said Uganda does not need the protection of the United Nations (UN) because of its strong military in spite of a very small budget.

"Uganda does not need the UN to defend it. We have a capable national army in spite of a very small budget," he said.

He said NGOs were being used by foreign powers to tarnish the image of the country.

"NGOs are being used to tarnish the image of the country by foreigners and their agents. These NGOs are giving money to desparate youth to burn tyres, beat women and rig elections. They give these youth sh100,000 to burn Kampala. We will not allow anyone to burn down the city. Some of these youth don't like what they are doing, but they are desparate for money,"he said.

"We shall not allow wrong doers to terrorise our people. Telling lies to foreigners will not help them."

He added that the ruling party NRM is always working for patriotism while the other actors are working to revive sectarianism. 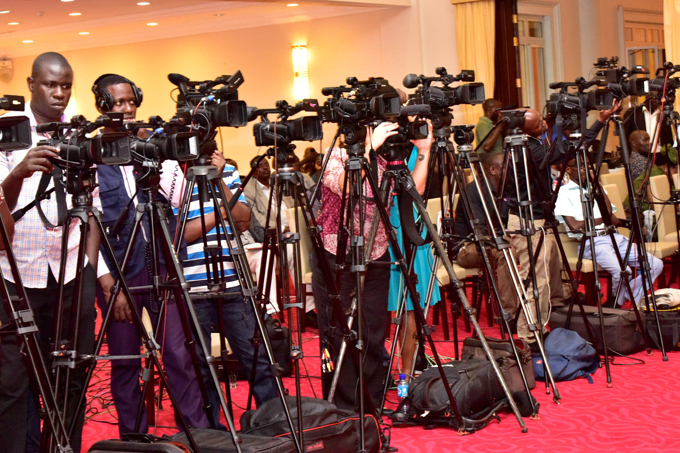 Museveni acknowledged that the murder of the former Buyende District Police Commander Muhammad Kirumira on Saturday had scared people.

"Urban crime that saw the death of sheikhs, Joan Kagezi, kiggundu, Magara, Abiriga and now Kirumira, these murders have scared people and all these are big cases. For Joan kagezi, arrests haven't been made, though I know who the suspect is because they briefed me long ago," he said.

He revealed that security cameras had arrived and were being installed in and around the Kampala.

Museveni said the NRM government has solved the problem of infrastructure even without enough money.

"I put my foot down in 2006 and persuaded the NRM government to suppress the other sectors and improve the road network. This has seen the construction of many roads using mostly our money. Electricity has also been extended to all the districts except Kabong and Kotido but we are working on that. We also now have an issue off too much electricity, but that is a good problem, this electricity will see us expand. It will also be cheaper," He said.

He said the government was also in the process of setting up of more industrial parks around the country.

For 10 years, he sought cure from witchdoctors

What is a hydrocoele?