Kirumira excelled in his work - Police
Next Story

The former Buyende District Police Commander, gunned down in cold blood by runaway gunmen, was lowered into his grave at around 5:40pm local time amid chants from the thick crowd.

The former Buyende District Police Commander, gunned down in cold blood by runaway gunmen, was lowered into his grave at around 5:40pm local time amid chants from the thick crowd.

MPIGI - Thousands of mourners showed up at Mpambire in Mpigi district, where slain Police officer ASP Muhammad Kirumira was laid to rest on Sunday.

The former Buyende District Police Commander, gunned down in cold blood the day before, was lowered into his grave at around 5:40pm local time amid chants from the thick crowd.

Resty Nalinya, the woman he was iwith n his car at the time of the assassination, will be buried on Monday in Mpenja, Gomba district.

The two were snuffed out by runaway gunmen in Bulenga on Saturday at about 9:00 local time near Kirumira's home. They were pronounced dead at Rubaga Hospital in Kampala, before their bodies were taken to Mulago for autopsy.

Police told a press conference on Sunday that they had met the families of the deceased and the respective burial arrangements worked out.

Police spokesperson Emilian Kayima told reporters that the assassination was regrettable and that security agencies "are putting their heads together in the hunt for these criminals, and our resolve to get to the bottom of this is total".

But hours later, he faced a cold reception at the burial place in Mpigi, where he was blocked by mourners from addressing them.

The heckling did not stop at him.

Internal affairs minister Gen. Jeje Odongo, representing Government, faced similar harsh treatment as soon as he arrived. Amid the unpleasant aura, it did not take long for Kayima and the minister to prematurely leave the place amid heavy security deployment.

There was heavy security deployment at Mpambire

Earlier, speaker after speaker at the home of Kirumira's father, Abubakar Kawooya, described the fallen Police officer in glowing terms -- as an honest man who fought for equality, a hardworking policeman and a caring family man.

The mammoth crowd proved difficult to bring to a hush during the speeches. But they did give Kirumira's father Kawooya the measure of respect he deserved to speak to them.

Kawooya, speaking during prayers for his son at Old Kampala Mosque earlier, said the entire nation is at loss, and thanked all those that supported and loved them. 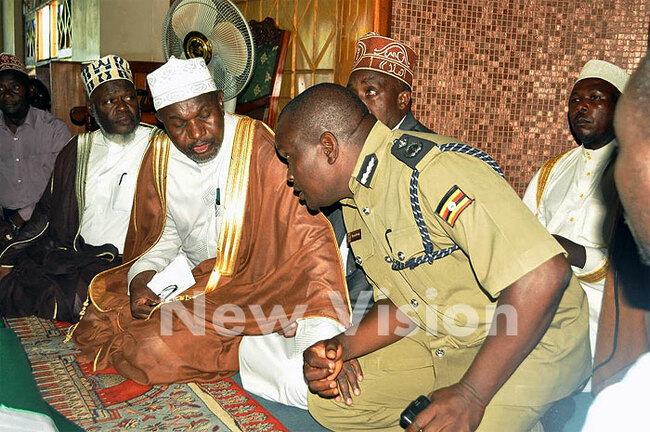 Kirumira's body had been brought to the mosque for a special prayer, before it would be taken to Mpigi. Here, second deputy mufti Sheikh Muhammad Ali Waiswa said that Uganda loses respect when citizens are killed in a "humiliating" manner that Kirumira's life was brought to an end.

"We need to love one another, we need to forgive each other. We are not the first to live in this counry and will not be the last ones.

"In this kind of death, we have lost not only our brother Muhammad Kirumira, but we have a very long list of our brothers," said Waiswa.

"Silence does not mean justice, we require justice, and if they do not provde it in this world, we know that the Almighty God will not let us down."

Waiswa told the Mufti of Uganda, Sheikh Ramadhan Mubajje, that the Muslim community needs an "action programme" since "Muslims have been attacked from all angles" and that there are still death threats going around in the form of flyers.

According to him, the programme would sensitise other people that "we are all equal citizens of this country".

"I call on all of you to remain peace-loving citizens, respect rule of order and be tolerant to the mistakes of others," Waiswa said.

In his remarks, Mubajje said Kirumira was a peace-loving and honest man who was, most importantly, a true Muslim.

Calling for justice and equality to prevail, the Mufti urged the Muslim community to rise up in prayer for the entire nation.

He said that the killers of Kirumira and many others before him should be found so that "we know why they are killing us".

Besigye attended the prayers, as did Maj. Juma Seiko.

In Sunday's Police press conference, Kayima offered to briefly explain why Kirumira had remained with rank of assistant superintendent of police (ASP) following a recommendation by the Police tribunal to have his rank lowered.

Earlier this year, the Police disciplinary court found him guilty of some offences, and as such the tribunal recommended that he be demoted as regards his rank.

Kirumira, however, appealed against the decision -- the reason he has remained an ASP.

"In law, when you appeal, you retain your rank," Kayima told reporters.

After his training, he was deployed to Kibaale district as a detective and later in uniform in various capacites. He served as the officer in charge of Nansana Police Station and then the District Police Commander for Buyende.

"In our view [Police], he excelled in many of these, but of course as we serve, there are challenges. He underwent some challenges," said Kayima.

Meanwhile, in mourning the death of Kirumira, President Yoweri Museveni said criminals are taking advantage of "gaps I identified in my speech to Parliament".

"The Police Force are working hard to fill the gaps. They have started installing the cameras and other measures are being put in place.

"The electronic identification of Boda bodas would have helped us to identify these people quickly. However, while still using the old methods, I want to salute the residents of Bulenga for, although not armed, some Boda Bodas gave chase to the killers - four of them riding on motorcycles - up to Mile 9," Museveni said.

The President added that "we are going to re-activate the Luweero methods to deal with these cowardly pigs".

What you didn't know about afande Kirumira

Dry zones in greater Kampala to get water soon - NWSC

NWSC to increase water supply by 50%