Muhammad Kirumira shot dead near his home
Next Story

A tentative funeral programme is released as a cloud of gloom hangs over the residence of slain former Buyende DPC Muhammad Kirumira.

A tentative funeral programme is released as a cloud of gloom hangs over the residence of slain former Buyende DPC Muhammad Kirumira.

Mourners at the home of Muhammad Kirumira on Sunday. (Photo credit: Farooq Kasule)

WAKISO - Scores of people Sunday morning gathered at the home of Police officer Muhammad Kirumira to mourn his death, as his wife (now widow) made an emotional appeal to government to intervene in the murders happening in the country.

The former District Police Commander for Buyende was gunned down by runaway assassins Saturday evening as he drove near his home in Gogonya Zone B in Bulenga, Wakiso district.

A female occupant of the vehicle was also shot dead. Police said they would withhold releasing her identity "in the meantime".

The two were pronounced dead upon arrival at Rubaga Hospital in Kampala.

Kirumira's murder sent waves of shock in Bulenga and beyond, and several people camped at his home to hold a night vigil.

And many more mourners flocked at the residence hours later. Our reporter at the scene said some were wailing and others, fighting back tears, told stories of "a man loved by many people here".

It was gloomy and sombre. Cold and moody.

The slain Police officer's wife, Mariam, had initially been feared to have been in the ill-fated car at the time of the murder, which, according to Police, occured at around 9:00pm local time.

Later, Police clarified that it was not her, but instead another woman.

Distraught by her husband's gruesome murder, Mariam appealed to the government to find a way of solving murders in the country.

News of her husband's assassination found her home.

"I was at home at around 8:00pm and I received a phone call informing me about the murder of my husband," she said Sunday morning at Mulago mortuary, where they had gone to collect Kirumira's body ahead of burial.

"We are being oppressed but we are not being helped. My appeal is that Government steps in to save the situation.

"Today, my loved one has been murdered and tomorrow it will be another person's. I ask the government to step in and inform us on what exactly happened."

Kirumira had gained a lot of experience as a Police officer

Earlier, a tentative funeral programme was been released.

Bbira mosque imam, Sheikh Saiyid Kasujja, who is Kirumira's relative, said the slain Police officer's body will be brought at his home in Gogonya Zone B at 11:00am.

Later, it will be transported to Mbampire in Mpigi district for burial at 2:00pm today.

Police said Kirumira was driving his personal vehicle when he was assassinated.

"We condemn these heinous criminal acts and promise to hunt down these merciless criminals and bring them to book," said Police spokesperson Emilian Kayima late Saturday.

Before being transfered to Buyende to take charge as district Police commander, Kirumira was officer in charge of Nansana Police Station.

Mourners held a night vigil at the residence of Kirumira and by Sunday morning, the number had increased

Meanwhile, preparations are underway at the home of Kirumira's father in Mbampire, Mpigi district, where he will be laid to rest on Sunday. 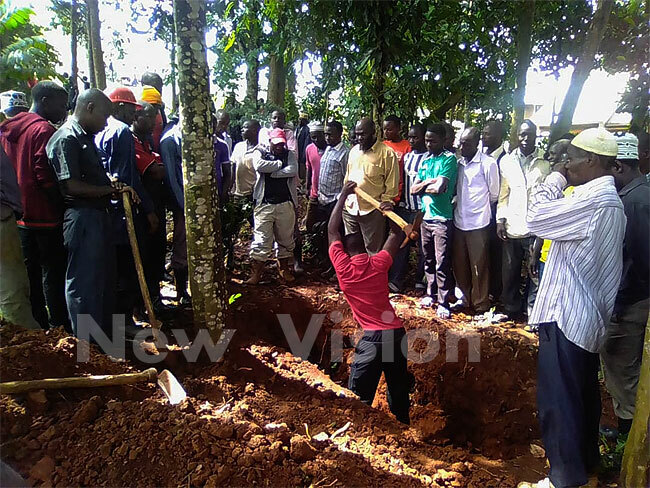 Muhammad Kirumira murdered near his home

I have resigned from Police, says Kirumira

We condemn these heinous criminal acts and promise to hunt down these merciless criminals and bring them to book.