Although there is free education in both primary and secondary schools, parents in Busoga can’t afford to support their children to complete school.

Although there is free education in both primary and secondary schools, parents in Busoga can’t afford to support their children to complete school.

PIC: Bagiire planting an orange tree at Bunya Secondary School in Mayuge on Saturday. (Credit: Betty Angatai)
LAZINESS IN BUSOGA
MAYUGE- The state minister for transport, Aggrey Bagiire, has attributed the growing poverty in Busoga region to laziness.
He said a number of people don't want to engage in productive work and this has greatly affected the generation of household income and development in communities.
Speaking during a meeting of old boys and girls of Bunya Secondary School in Mayuge town council in Mayuge district on Saturday, Bagiire decried the increasing poverty in Busoga communities which he said has affected the education and health of the people.
"Although there is free education in both primary and secondary schools, parents in Busoga can't afford to support their children to complete school," Bagiire said.
He added that many children drop out of school and later become burdens to their parents and communities where they live.
Bagiire urged Busoga region to actively participate in commercial agriculture in order to boost their economy.  He also advised Busoga region to resume growing coffee on a large scale as it was in the past.
"Busoga, Buganda and Bugisu regions gained glory in coffee growing, but this faded due to laziness," Bagiire said.
He added that when colonialists came, the regions were hailed for coffee production. He accused the youth of leaving coffee growing to the elderly.
Bagiire recalls how his coffee seedlings were rejected by the youth in Mayuge district when he was serving as the national chairman for National Agricultural Advisory Services (NAADS)
"I brought coffee seedlings for the youth to plant, but they rejected and demanded money. The few that planted are now earning money and have improved their livelihood," he said.
He urged residents to take an active role in agriculture so as to get rid of poverty..
Speaking at the meeting, Waira Kiwalabye Majegere, the Member of Parliament for Bunya East constituency and an old boy at Bunya Secondary School, reemphasised the need to revive the academic standards of the school.
"Bunya Secondary is losing its academic glory, but as former students, we cannot sit and watch.  We are determined to revive it,"Majegere said.
He also advised students to have discipline in order to have a brighter future. 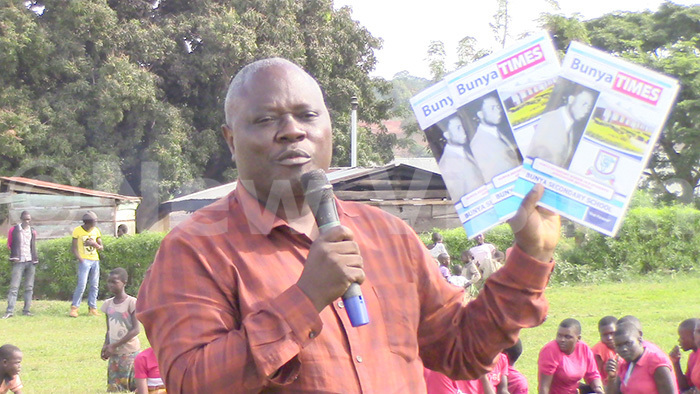 Irene Kauma, the personal assistant to Janet Kataha Museveni, the minister for education and sports advocated for girl- child education.
Kauma also called for unity and effective service delivery in order to enable development.
"Let us value unity and togetherness. Don't seek to be great, seek to serve, value and contribute to society," Kauma said.
Fred Mugabi, the school's headteacher, pointed out the challenge of lack of text books and fence for the school.
Bunya is one of the oldest secondary schools in Mayuge district. It was started in
1980 by Hon. Sam Tewungwa, the then minister for internal affairs.

I wonâ€™t step down, says Ssentongo