MENU
KCCA to include counselling in health care
Previous Story

Outcomes of decrease in rainfall on the ec...
Next Story

The Archbishop of the Church of Uganda, Stanley Ntagali has set March 1, 2020 as the date for his retirement from his current position as the head of the province.

Ntagali made the revelation in his address during the 24th provincial assembly which concluded on Friday at Uganda Christian University (UCU) in Mukono.

He was consecrated on December 16, 2012, replacing Henry Luke Orombi. Ntagali said that as the constitution of the Church of Uganda stipulates, he will be clock 65 years on March 1, 2020, and that will be the official date for his retirement from office which he has so far served for six years.

He however said that he still has over one and a half years to carry on his usual work of preaching and leading the church.

Speaking to New Vision, Ntagali said he is happy that he has been able to preach the gospel and visit all the dioceses.

"I am grateful that God has provided me with wisdom which has enabled me lead the team of bishops, clergy, lay leaders and Christians from all the walks of life. That is very good for me," he said.

Among the successes Ntagali boasts of is the inauguration of three new dioceses which increased the number from 34 to 37. They are Central Busoga, North West Ankole and Lango.

"In my charge when I was being consecrated as the archbishop, I made a pledge to the Church among the many things, to have the Church House completed. Though it has taken decades, I am delighted that we officially opened it on Friday," Ntagali said. 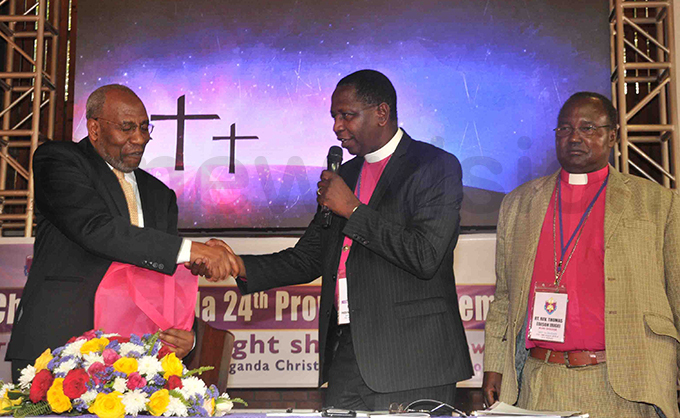 "I also embarked on the 5000-seater All Saints Cathedral Kampala which is likely to be completed before the end of this year," he added.

Ntagali also said that the youth who are dear to him, have been brought to Jesus during his tenure through the staging of numerous gospel conferences.

He also said that it is a great pleasure to have the Church of Uganda united unlike in the past.

Ntagali was the first bishop of Masindi Kitara diocese where he left in 2012 after being elected the 8th Archbishop of the Church of Uganda by the House of Bishops.

Bishop Henry Katumba Tamale of West Buganda diocese said that though the archbishop has the option of serving for ten years, when he clocks 65 years before the his term of office elapses, he is supposed to retire.

Katumba said he is happy with Ntagali's service as the archbishop because he is among the fruits of his hands.

"I am among the few lucky bishops who have been consecrated by Archbishop Ntagali. Indeed, he has led the church well and that is centred on the developments achieved during his tenure," he said.

The bishop of Mukono diocese, James Williams Ssebaggala, said as the House of Bishops, they are convinced that the Ntagali's efforts have transformed the province in a number of ways.

Ssebaggala added that Mengo Hospital which was founded by the Church of Uganda had gone into private hands, but, Ntagali had the decision revised and everything is now running smoothly under the Church's stewardship.

The retired bishop of Mukono diocese, Elia Paul Luzinda Kizito, thanked God for the fact that even the dioceses that Ntagali found riddled with conflicts like West Ankole and Kitigum are now peaceful.