Trump, under pressure to honor McCain
Next Story

The 32-year-old's lack of football fitness was evident and he appeared to tire quickly.

The 32-year-old's lack of football fitness was evident and he appeared to tire quickly.

PIC: Bolt during training with Australia's Central Coast Mariners. The eight-time Olympic champion admits it has been tough raising his fitness levels ahead of his first trial football match. (AFP)

GOSFORD - Sprint superstar Usain Bolt admitted Tuesday he was struggling with the tempo of professional football but is working hard to raise his fitness levels ahead of his first trial match this week.

The eight-time Olympic champion has been given an opportunity by Australia's Central Coast Mariners to fulfil his dream of a soccer career and has stepped up his training regime since hooking up with the A-League club last week.

He was put through his paces with the rest of the squad at a more intensive session at the team's base in the town of Gosford, 75 kilometres (47 miles) north of Sydney, on Tuesday.

After some warming up and a jog around the pitch, he took part in ball drills and while his passing was fine, he was slow to get the hang of the movement required.

The 32-year-old's lack of football fitness was also evident and he appeared to tire quickly, resting more than his teammates.

Bolt admitted to struggling with the constant stop-start of football, more used to a quick fire sprint on the athletics track before winding down.

"The most challenging thing for me is the stop and go because I'm not used to picking up speed, going back down, then back again," he said.

"It's all about practising and getting used to the system. I have time so will just learn the ways and keep pushing."

The Mariners hope to turn Bolt into A-League material in time for the start of the 2018/19 season in late October, with the club saying he can stay indefinitely to prove his credentials and earn a playing contract. 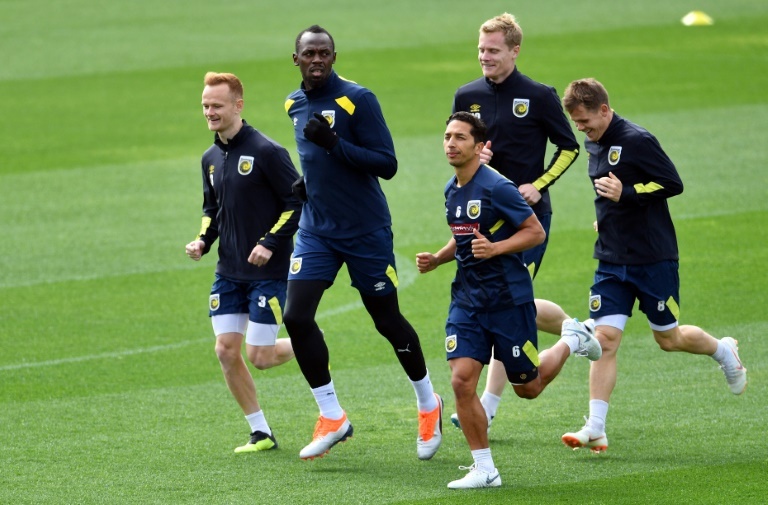 They have a pre-season friendly on Friday against an amateur side and Bolt is expected to get his first taste of a competitive game, but only as a substitute.

"I imagine he'll get some minutes on Friday," said club coach Mike Mulvey, conscious that thousands of fans are set to turn up and with the match due to be broadcast live on pay-tv.

He said the Jamaican was 'doing OK.'

"The things we are asking him to do are things that he hasn't done for quite some years," he added.

"He has played football as an athlete in between athletic meets so he has rudimentary skills. There's no problem about that. It's about being able to do it at the speed that we do it. It takes time to adjust."

Bolt dominated sprinting since taking double individual gold at the Beijing Olympics in 2008.

He went on to win a further six Olympic golds and pick up 11 world titles before retiring last year and pursing his real passion football. He remains the world record holder for 100 metres.

Bolt said he was seeing slow improvements in his game.

"For me it's about just getting fit and as many touches of the ball that I can. The more I play the more comfortable I get," he said.

"It's all about being focused, taking my time and being smart and pushing myself to get to the level I need to be at to be in the starting.

You can get a passport in hours