A thrilling Kampala Twins Festival at Namb...
Next Story

Can you tell them apart? Spot the difference

When you blend colour and flair, you are guaranteed a pot of flavour and fun. That's what the Kampala Twins Festival was all about. But can you tell the pairs apart? Try your luck.

When you blend colour and flair, you are guaranteed a pot of flavour and fun. That's what the Kampala Twins Festival was all about. But can you tell the pairs apart? Try your luck.

All roads led to Namboole Stadium on Sunday as one highly-anticipated event got back with a bang.

Thousands of twins and multiples from all corners of Uganda -- and across the borders -- made their way there to grace the fifth Kampala Twins Festival.

The annual event, organised by Vision Group's Sunday Vision, brought together twins, families and friends, as well as multiples, who included triplets and quadruplets.

Twins Candy Nyakato and Carol Nyangoma made sure not to miss out on the fest. They made it easier for people by one wearing a white top and the other a black one.

Interestingly, we had a set of three twins in the same family. Linda Murungi (left) carrying Ronita Nakato and her twin Rhoda Muyinza carrying Rowena Babirye. Roy Musinguzi and Roland Muyinza are the boys.

Some of the highlights of the event included talent shows, bouncy castles, a twins parade, games for all age groups and a helicopter ride.

And amid all the fanfare, this entertained pair seemed to shared a secret perhaps only they wanted to know.

It was a day packed with plenty of activities, and the merry-go-round was one of the favorites.

A helicopter ride. Anyone?

For some, it was the first getting this close to a real aircraft. At this moment, their toy planes were no match!

The trampoline, another of the several picks of the day, had kids who have a thing for thrill soar like birds, while the adults kept a close eye on them.

This one young masked reveller slapped in a lollipop and scaled the bouncy castle for some thrill. He and the others enjoyed themselves to the fullest.

What's an outdoor activity on a beautiful warm Sunday without a camel ride? Unimagineable, of course.

The Kampala Twins Festival got you covered, with a ride atop the 'desert horse' getting the enthusiastic ones a measure of elevation.

There was a dancing competition too, with prize money at stake.

Participants got their groove on -- traditional, freestlye, name it. All styles were allowed.

With the theme of this year's event being 'Twins Got Talent', some pairs were so eager that they could not wait to get to the stage.

It was groove time even on the grounds.

Now that's the way to have fun!

But the pair that reigned supreme over the rest were David Kato and Barbra Babirye, who won the first prize, taking home sh2m.

for those with quick hands.

The money blowing booth got lucky participants scrambling for the elusive notes.

A couple of youngsters made away with some decent loot. Enough to buy some icecream and also keep the rest for school pocket money.

Can you spot the difference?

Of course you can.

But besides the glasses, which other differences can you spot here?

If you think you are a pro at telling twins apart, try your luck at nine-month-old Roshan Wasswa and Rowel Kato, who enjoyed every bit of the gala right from the comfort of their double pram.

Others, like these two cute princesses, opted to cruise around.

It may have taken them a bit of time to sink into the mood of the day, but trust me, they eventually did.

Sheikhs Hussein Kato Mutagaana (left) and Hassan Wasswa Mutagaana would not be left out too.

And they made for some interesting fashion presence as well, slapping on polka dot bowties on white suits.

The twins parade was a sight to behold too.

There were flashes of talent within the parade itself. Colour and flair in one!

Kids do grow fast, don't they?

And for this lovely fella, his suit will eventually fit on in a matter of months.

It was a colourful event.

For some twins, even the strides were synchronised.

Don't you just fancy such detail!

You  can only admire their brotherly connection!

Oh, we had some triplets too!

I swear I failed to tell Becky Nakato and Belinda Babirye apart!!!!!

Twins Kellian Wasswa and Kristian Kato know how to have fun.

And with the painting on their faces, they seem to be pretty adventurous as well!

Group photos were part of the side plot . . . 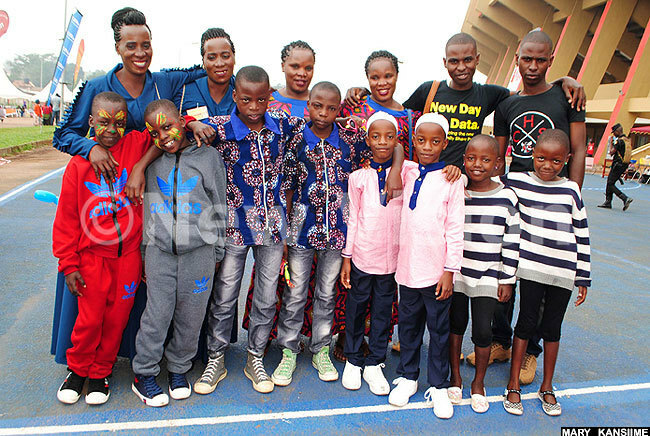