The dual chose to a spiritual life over living an ordinary one after. For them, chosing this path was one way of giving back to God on behalf of their family.

In an interview with Sister Babirye she said, "I am happy to be a nun and my twin brother is a priest as well.

"During childhood, we were always together. With all the childhood games we used to play, Kato used to lead us in Mass and call himself Fr. Ssemuddu. However, it was different for me. I used to enjoy making dolls.

"At some point, I also developed the passion for serving the Lord in a special way. I told my father I wanted to become a nun.

"I went to Jinja-Kalooli convent and I applied to join the sisters of Immaculate Heart of Mary Ggogonya not knowing that I was supposed to fill the forms at my home parish at Bwaise.

"By then, Kato was in the seminary and he joined under our home parish Bwaise. He had support from the family. But, when I told daddy that I want to be a nun he laughed because he was taking me as weak girl who always wanted to be near them. Nevertheless, he supported me in my path.

"We call ourselves the 10% (Ekimu eky'ekumi) of our family. The tithe that daddy and mummy divided and gave back to God, we love each other and if Kato is sick, I can feel it on the other end," Sister Babirye narrated. 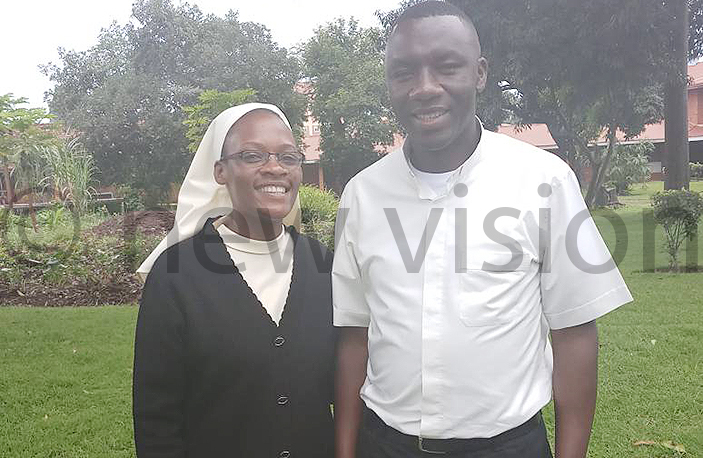 She added that earlier, they did not have anyone in the family who was religious or a priest. Babirye believes this was God's calling and a blessing to their family.

"We make it a point to communicate. Sometimes I feel bad when i try to call him and he doesn't pick my calls."

Unlike Babirye, Kato is soft spoken says that he is proud of his sister who also decided to serve God.

Kato says that their father encouraged them to join the seminary with his elder brother who later dropped out.

"Although she is a girl I recall that in our childhood we used to wear the same clothes."

Like his sister Kato says that when he falls sick the sister fall sick as well.

"We are very close more than our brothers and sisters, we share a lot especially concerning our faith," Kato said.

He says that when he calls her and she is not responding he is forced to call people around her so he can atleast get to talk to her.