During the thanksgiving mass, Lwanga confirmed twenty students and also blessed the S4 and S6 candidates.

During the thanksgiving mass, Lwanga confirmed twenty students and also blessed the S4 and S6 candidates.

PIC: Archbishop Kizito Lwanga cuts a cake with the headteacher of Smack and some of the school's alumni to commemorate the school's 112th anniversary. (Credit: Mathias Mazinga)

KAMPALA - Saint Mary's College, Kisubi(SMACK) on Sunday marked its 112th anniversary with a call on the school's stake-holders to establish an endowment fund that will benefit needy students.

Among those that mooted the idea was the representative of the parents, Regius Yiga.

Yiga highlighted the enormous challenge that the school faced with regard to the increasing number of needy students.

"We have many students from poverty-stricken homes. They are intelligent but cannot afford the fees. The solution to this challenge is to establish a charitable fund to help such students," she said.

Yiga's request was echoed by the Chairman of the Old Boys, Charles Odaga who encouraged fellow alumni to exercise the virtue of charity that they got at the school by helping the needy students. 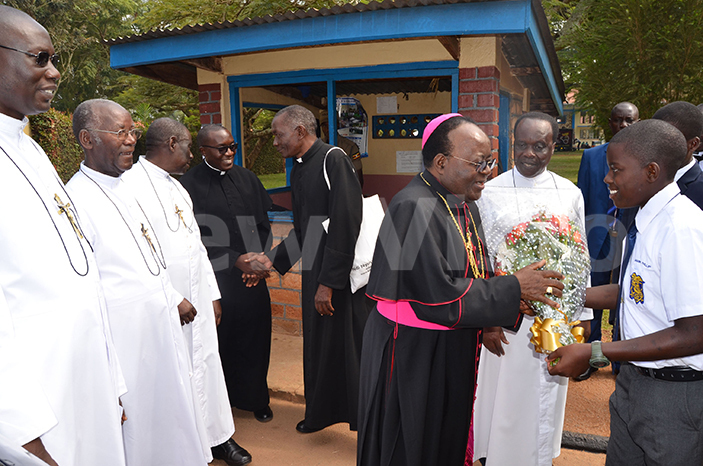 The Brothers of Christian Instruction look on as Archbishop Kizito Lwanga receives a flower bouquet from a student of SMACK on arrival for the celebrations.(Credit: Mathias Mazinga)

He argued that the school would not attain the academic and infrastructure development it required unless the alumni took active participation in its affairs.

The Chairman of the Board of Governors, Prof Edward Kirumira, assured the stakeholders that the Board was committed to enhancing the school's moral, academic and infrastructure excellence.

The headteacher, Rev. Bro. Deodati Agannyira thanked the teachers, support staff-members and parents for their contribution to the school's academic excellence.

He also thanked the Catholic Church and the ministry of education for being very supportive to the school.

The Metropolitan Archbishop of Kampala, Dr Cyprian KizitoLwanga (who presided over the thanksgiving mass), commended the White Fathers (Missionaries of Africa) for founding the school, which he said was ranked among the best educational institutions in the country. 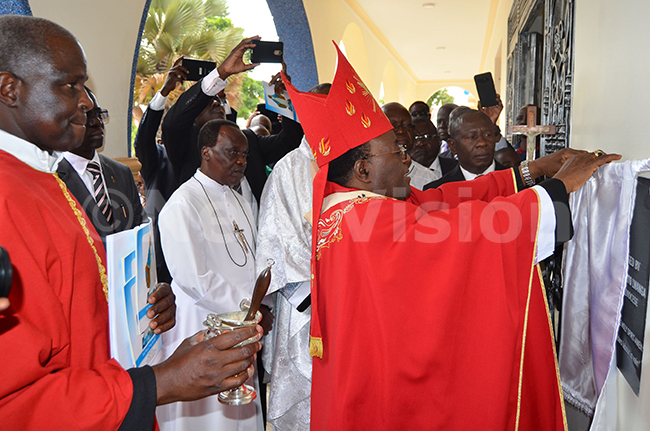 The Archbishop unveils the plaque of the newly constructed sh4b block of St Mary's College Kisubi over the weekend.(Credit: Mathias Mazinga)

He also thanked the Brothers of Christian Instruction for manning the school so ably, ever since it was handed over to them by the White Fathers in 1926.

The minister state minister for youth and children Florence NakiwalaKiyingi and the Deputy CEO of Vision Group, Gervase Ndyanabo also graced the function.