Taj Mahal: A love tribute to beauty
Next Story

PHOTO: Street children in Kisenyi slum in Kampala. Violence can drive children away from home

Jjunju is an angry boy. He will punch anyone at the slightest provocation.  It is a way of life he has known since he was born.

"My father punched and kicked everyone in my family including mother," he slowly loosens up, after a bit of chatting and forming a friendship.

Junju's story is merely an insight into a traumatised child who becomes a traumatiser as he grows up. In fact, at just 13, he has been in and out of the cells over assaulting his peers and teachers.

The most recent of his episode of his violent life was when he used a razorblade to cut a fellow pupil who had touched his book.

"It is like he wants to get the childhood trauma out of him by expressing it on the people around him," says one of his teachers.

But that cycle, according to experts, is likely to continue in the event that Jjunju grows into a family man and starts abusing his children.

Violence against children brings enormous emotional and mental distress; the emotional abuse suffered brings the greatest prejudice to a child, according to Counselling psychologist Ali Male.

"There holistic health is affected which means their emotions and world of feeling is affected. It generates a disorder in moods and emotions and the child is not flexible," he explains.

Male says in the long term, the child develops hatred and bitterness because of lack of compassion.

The child feels like everybody else is like the parent or person who destroyed them. They develop long term anger and if not helped recover, can carry the abuse to the next generation.

This is because their orientation, mental ability, reasoning, thinking, problem solving is all affected.

There is retardation too in a child plus, there is low development of emotions and intelligence. 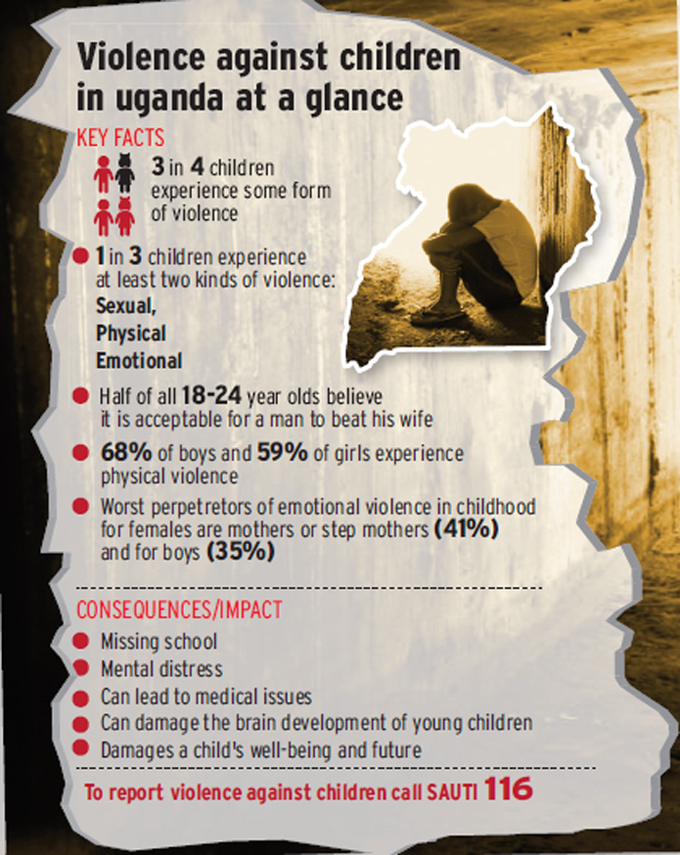 The child becomes biased and thinks negatively about people especially if the abuse was from a parent, according to Male.

But, this is the reality of majority of children in Uganda. 75 percent of the girls and 76 percent of the boys experience violence in their childhood.

Uganda is experiencing high levels of physical, emotional and sexual violence against children, according to findings from a 2015 national survey on Violence against Children.

A global concern, violence against children is occurring in homes, schools, state institutions that include rehabilitation centers, justice systems and work places.

Some children suffer if not one, two or a combination of these violence and it has dire health consequences including depression, suicidal behaviour, sexually transmitted infections, risky sexual behaviour and even death.

In Uganda, one in every four girls aged 13-17 years, has been found to suffer sexual violence in their childhood.

Six in every 10 boys in the same age bracket suffer physical abuse, according to new findings released by the ministry of gender, labour and social development.

Perpetrators and the resultant effect

The most common perpetrators of emotional abuse in children are their step mothers or mother plus step fathers or fathers, according to Uganda violence against children survey.

For sexual violence, the frequent perpetrators are friends who abuse the young girls on the roads, at school or in even their homes.

While adults in the community, are the frequent perpetrators of physical violence on young boys.

This high level of violence, has led to devastating and negative outcomes that include mental distress, acquisition of sexually transmitted infections and contemplation of suicide by the violated children.

Children who suffered emotional violence were likely to report emotional distress and thinking of killing themselves.

Also 13-17 year old children (both girls and boys) who experienced sexual violence contemplated suicide while one in five of the boys the same age sexually abused experienced symptoms or were diagnosed with sexually transmitted Infections.

The Minister of gender, labour and social development Janat Mukwaya says society too is affected by violence against children.

"If sexual violence against girls is allowed to continue, stemming the spread of HIV and AIDS and teenage pregnancy will be all the more, difficult.

Moreover, if children are vulnerable to violence in school, the goal properly educating all children will be compromised," she explains.

The Convention on the Rights of the Child which Uganda is signed up to, defines a child as every human being below the age of 18 years.

It also includes a legal prohibition on corporal punishment in all settings, and to transform and bring an end to all harmful practices.

In Uganda, the legal framework for protection and promotion of children's rights has been enhanced with the enactment of the Children (Amendment) Act 2016.

On March 2, 2016, Parliament passed the long-awaited Children (Amendment) Act. Violence as per the Act means any form of physical emotional or mental injury or abuse, neglect maltreatment and exploitation.

Including sexual abuse, intentional use of physical force or power, threatened or actual, against an individual which may result in or has a high likelihood of resulting in injury, death, psychological harm mal-development or deprivation.

But, in spite of these laws that prevent violence, there is widespread societal acceptance of all forms of violence in Uganda, according to the ministry of gender, labour and social development.

It says these social norms enable violence to be so prevalent across the country and the consequences have been dire with children missing school and developing mental distress.

Violence against children too is leading to medical issues; damaging brain development of young children, their well-being and future.

Change that is needed to end the damage

Fred Onduri who was Commissioner in charge of Youth and Children Affairs in the Ministry of Gender, Labour and Social Development but, now retired says though there are policies to protect children against violence, enforcement is a problem .

"We know this violence's happens in homes, schools, government and private institutions but, the question is what is being done to stop it by people who need to be involved. This includes among other parents, teachers, law enforcers," he says.

He adds: "If a teacher has been found to have physically abused a child, they should be suspended or have their salary used to compensate and treat the child.

A teacher who resorts to physical violence against a child demonstrates that they have run out of ideas to talk, negotiate and put a child in the right path."

Onduri explains supervision is important in this case and a national task force at national and sub county level should be considered to carry out abrupt inspections of schools so that perpetrators of violence against children are dealt with.

"Also we don't need all these government children institutions where some of these violence's occur but, they are kept for money making purposes from donors.

Some of these children have both parents who can shape them into responsible adults only a few don't have caretakers, these homes must be reduced to end violence," he says

Onduri says even for children who come in contact with the law, they are not supposed to share cells with adults but, this happens. He says the officers in charge need to be reprimanded to stop this violation.

Adding that even those parents who because they have found new love, choose their partner over their children, neglect them or ship them off to orphanages as they merry make, hence subjecting the children to emotional abuse need thorough punishment.

"We need to look at each category of perpetrators of violence against child and come up with stern sanctions," he suggests.

Onduri says all parties too must be engaged including the National Children's Council, the ministry of education, the police child protection department, prisons, everyone in public or private sector and community leaders, on whether they have structures and how to be facilitated to stop the vice.

"Now that we are paying local councilors, they should be answerable for any act of violence against children, if they have not taken action, they should be punished first.

Male says important too, is for people around children (neighbours, care giver, parents too) to pay attention to signs and symptoms of violence against a child to be able to find help and stop the evil altogether.

"When a child is easily irritated, aggressive, has a tough face never smiling in their facial expression, has a look of agony, is not walking properly, has physical scars, performs poorly at school, is always isolated, stammers, tells lies or even steals it may all be signs of abuse and even a bigger emotional problem.

It's important to always involve a third party as a person who has noticed these symptoms to help end violence against children and also seek professional help, to aid their emotional recovery from violence," he explains.

According to the ministry of gender, labour and social development, there is need for a widespread change in the attitudes and behaviours to significantly reduce and eventually end all forms of violence against children in Uganda.

For the adolescents, they must develop and use life skills to prevent and protect themselves from all forms of violence

If you experience any form of violence, report immediately to parents, teachers, religious leaders, health workers and community leaders who can offer you protection and help you to access services including justice

Mukwaya says Uganda is committed to acting as a global leader in ending violence against children.